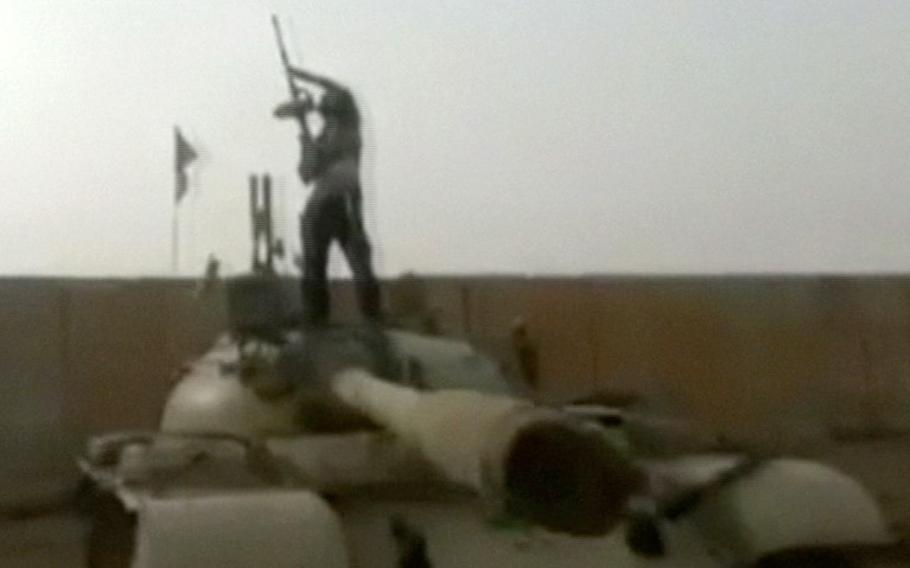 A militant stands on top of a tank at a military compound abandoned by the Iraqi military near Tikrit in Salah al-Din province, Iraq, in this image from video taken by militants Wednesday, June 11, 2014, which has been authenticated based on its contents and other AP reporting. (Image from militant video via AP)

This timeline reflects snapshots along the course of the more than seven-year war in Iraq. It is not meant to be a complete annotated guide to important moments.

April 9: Hundreds of jubilant Baghdad residents take to the streets, tearing down posters of Saddam Hussein and looting government buildings as U.S. forces fan out to the north and west. U.S. Marines help topple a statue of Hussein and a Shiite Muslim leader tells his followers: “The tyrant of the world is finished, thanks to the coalition.”

May 1: Just 43 days after announcing the start of the war in Iraq, President George W. Bush tells the nation that “major combat operations in Iraq have ended,” speaking on the deck of the aircraft carrier USS Abraham Lincoln in front of a banner proclaiming “Mission Accomplished.”

July 27: Uday and Qusay Hussein Saddam, sons of Saddam, killed in a gun battle in Mosul.

Aug 29: Explosion near the main Najaf mosque kills more than 90 including Shiite leader Ayatollah Mohammad Baqir al-Hakim, setting off a power struggle within the Shiite community.

Dec. 14: Saddam found in a hole in the ground near Tikrit.

2004Jan. 17: Death toll of US troops hits 500 as fighting spreads throughout the “Sunni Triangle” north and west of Baghdad.

March 31: Fallujah mob kills four contractors, whose bodies are burned, dragged through town and hanged, prompting a U.S. assault on Fallujah that is called off under political pressure from Iraqi political leaders. Extremists remain in control.

Nov. 7: Thousands of U.S., British and Iraqi troops storm Fallujah in a seven-week operation that claims 95 U.S. lives but succeeds in capturing the city.

Dec. 21: Suicide bomber kills 22 at forward operating base Marez in Mosul. One of the deadliest days for U.S soldiers.

2006Feb. 22: Shiites’ most revered shrine, Askariya mosque in Samarra, is bombed by insurgents, triggering massive reprisal attacks against Sunnis and plunging the country to the brink of civil war.

March 19: Time magazine reports that Marines killed 15 Iraqi civilians in Haditha after a member of their unit is killed in a bombing. Total dead from the Nov. 19, 2005, attack was 24.

July: Country is on the verge of civil war. 3,000 Iraqis killed, mostly in sectarian massacres.

October: More than 3,700 Iraqi civilians die during the month.

March 17: Vice President Dick Cheney makes a surprise visit to Baghdad, saying that U.S. soldiers would “not quit before the job was done.”

March 19: Five-year anniversary of the war.

March 25: Against advice of U.S. commanders, Prime Minister Nouri al-Maliki launches attacks against Shiite rivals in Basra. The attack bogs down, U.S. intervenes with airstrikes in support of al-Maliki.

Sept. 9: President Bush announces that 8,000 troops will be withdrawn from Iraq by February, with 4,500 being sent to Afghanistan.

Nov. 17: Iraq’s Cabinet approves plan for all U.S. troops to leave Iraqi cities by the end of June 2009 and withdraw from the country by the end of 2011.

March 22: The release of hundreds of prisoners from Camp Bucca, a U.S.-run prison in southern Iraq, is said to have facilitated the revival of Shiite militias and Sunni insurgents in Basra, Baghdad and along the Euphrates.

March 31: British forces hand over command of Basra province to U.S., marking the first step in the withdrawal of most of Britain’s 4,100 remaining troops.

May 17: Tensions between Sunni Arabs and Kurds boil over in Nineveh, the northern Iraqi province that includes Mosul.

June 30: The U.S, withdraws its remaining combat troops from Iraq cities and turns over security to Iraqi police and soldiers. More than 130,000 U.S. troops remain in the country.

July 9: Attacks in Baghdad and a city in northern Iraq kill at least 41 people and wound dozens more, the worst violence since Iraq celebrated the withdrawal of American troops from cities and towns.

2010Jan. 1: Judge dismisses charges against five Blackwater Worldwide security guards accused of killing 14 Iraqi civilians in a controversial shooting in a Baghdad square two years ago. The decision is met by bitter resentment of the American occupation.

Jan. 2: U.S. commanders announce a first month without a combat death since the war began.

Aug. 31: Operation New Dawn set to begin, with 50,000 U.S. troops remaining in Iraq. President Barack Obama declares an end to the seven-year American combat mission in Iraq, saying the U.S. has fulfilled its responsibility to the country.

Oct. 17: U.S. and Iraq fail to come to agreement on legal immunity for residual training force to remain in Iraq after the troop withdrawal.

Dec. 18: The last U.S. convoy rolls across the border into Kuwait, bringing down the curtain on the U.S. war in Iraq.