Talks with Taliban for US troop withdrawal only in early stages, Khalilzad says 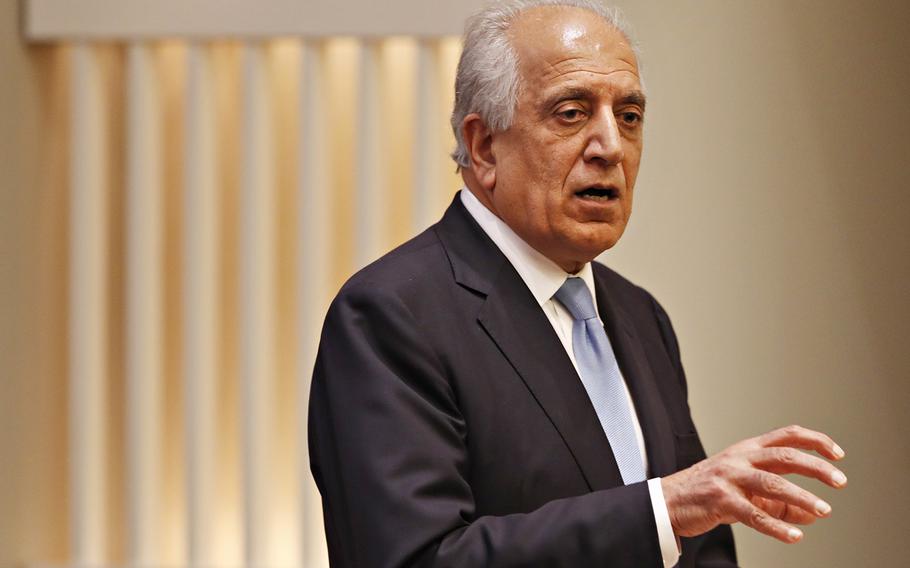 Special Representative for Afghanistan Reconciliation Zalmay Khalilzad speaks on the prospects for peace, Friday, Feb. 8, 2019, at the U.S. Institute of Peace, in Washington. (Jacquelyn Martin/AP)

WASHINGTON — The top State Department official charged with negotiating with the Taliban said he hopes to see an end this year to the nearly two-decade war in Afghanistan, calling recent dialogue with the insurgent group encouraging while admitting a cease-fire remains a long-term goal.

Zalmay Khalilzad, the U.S. envoy for Afghanistan reconciliation, said Friday that he and Taliban negotiators have struck an agreement, in principle, which could pave the way for at least some American servicemembers to exit Afghanistan, where they’ve been fighting for 17 years. Taliban officials promised Khalilzad in exchange that they would guarantee that Afghanistan – where the 9/11 terrorist attacks were planned – would not harbor terrorists who could threaten Americans or their allies, he said during an appearance at the U.S. Institute of Peace think tank in Washington.

“We are in the early stages of a protracted process to end the long suffering of the Afghan people and to protect the United States … from terrorism from Afghanistan,” Khalilzad said during his first public appearance since meeting with Taliban officials last month in Doha, Qatar. “We have a long way to go. ... What we’ve achieved so far is significant, but they are two or three small steps in a long journey.”

The United States boasts a roughly 14,000-troop force in Afghanistan largely working to train and advise the government’s security forces as they battle the Taliban for population control in a war long characterized by top U.S. military and Afghan officials as a stalemate. A small percentage of the U.S. force there is focused on targeting terrorist groups – namely al-Qaida and Islamic State forces that the Pentagon has said remain a threat.

Khalilzad called any continued threat of terrorism emanating from Afghanistan a “red line” in negotiations with the Taliban.

In recent months, President Donald Trump has suggested withdrawing nearly half of the American forces in Afghanistan, but U.S. officials have said he has thus far resisted that urge, largely in an effort to back Khalilzad’s negotiations.

Nonetheless, Tuesday in Trump’s second State of the Union, the president suggested some American forces could leave Afghanistan soon and vowed to end the war, stating “great nations do not fight endless wars.”

“We do not know whether we will achieve an agreement [with the Taliban], but we do know that, after two decades of war, the hour has come to at least try for peace,” Trump said. “And the other side would like to do the same thing. It’s time.”

Khalilzad said Friday that he agreed with Trump’s assessment, stating Taliban officials have expressed their desire to end the fighting to him, but in exchange they seek “legitimacy.”

Khalilzad is seeking an agreement in which Taliban would negotiate in good faith with the Afghan government and commit to ending any terrorism threat within the country. In exchange, Khalilzad said some or all American forces would leave the country.

Until a full agreement on such cease-fire terms is reached, he said, no part of the agreement would be instituted, ruling out a quick withdrawal of American forces from Afghanistan in the coming months. Taliban officials alleged publicly this week that the United States had agreed to remove half of its troops from Afghanistan by May, a statement Khalilzad called false.

“A peace agreement would not be immediately or shortly achieved in the foreseeable future without a comprehensive agreement on these other issues,” Khalilzad said, listing among those issues the treatment of Afghan women, who were oppressed under Taliban rule of Afghanistan before the American invasion in 2001. He added: “Nothing is agreed to until everything is agreed to.”

“Afghans must sit across the table with each other and come to an agreement about the future of their country,” Khalilzad said. “I am hopeful. I think the suffering of the last 40 years has brought with it a wisdom to these various groups.”