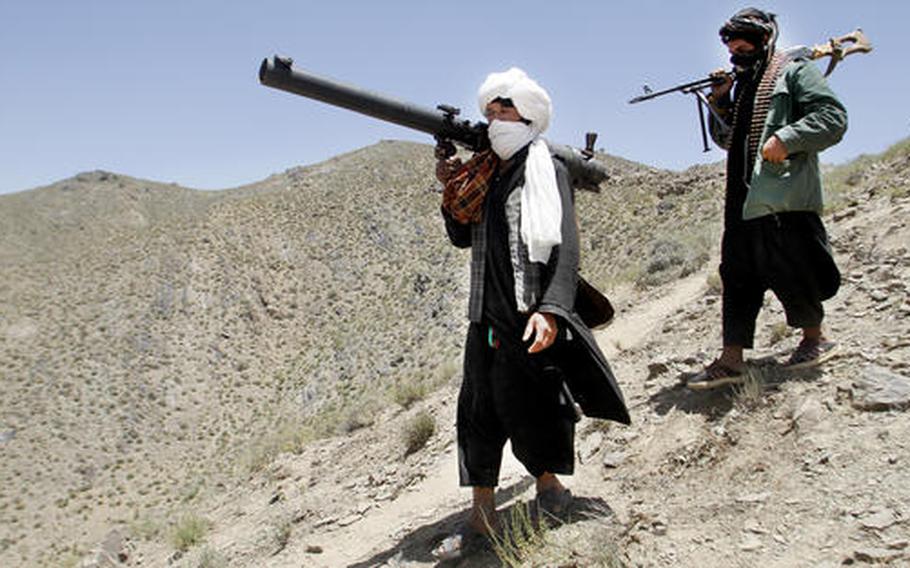 In this Friday, May 27, 2016 photo, members of a breakaway faction of the Taliban fighters walk during a gathering, in Shindand district of Herat province, Afghanistan. The Taliban kidnapped dozens of people on Tuesday and executed two of those hostages on Wednesday. (Allauddin Khan/AP)

KABUL, Afghanistan — Two people taken hostage by the Taliban in northern Kunduz province were executed by gunfire Wednesday, contrary to media reports that they had been beheaded, an official said.

In eastern Laghman province, two people were killed and 16 injured in an explosion at a market filled with shoppers, said Sarhadi Zwak, spokesman for the provincial governor. Among the wounded were two women and one child.

The hostages were found on a roadside in the Chahar Dara district “inhumanely shot down,” said Hijratullah Akbari, acting spokesman for the Kunduz province police.

Late Wednesday, the Interior Ministry said the government was investigating media reports citing unnamed officials who said the two had been beheaded.

Chahar Dara is northwest of the Aliabad district, where the Taliban kidnapped dozens of passengers early Tuesday morning and killed 10 after initially detaining about 200 at a highway checkpoint. The majority of the detained travelers had been released by Tuesday night.

At least eight are still being held, Akbari said, and operations to recover them are underway.

The Taliban have claimed the hostages are military officials, but Akbari said all but one of those kidnapped or killed — a slain local policeman — are civilians.

An official said that on Wednesday the Taliban had also kidnapped 17 civilian men from a bus in northern Sar-e Pul province on their way from Balkhaab district to the provincial capital.

The bus was stopped in the Sancharak district, said Zabihullah Amani, spokesman for the provincial governor. None of the hostages has been harmed and, rather than launching military operations to recover them, the government is seeking an agreement for their release.

“There is a strong presence of the Taliban in Sancharak,” Amani said. “We have sent tribal elders to the Taliban and are trying to solve the issue with tribal negotiations.”