Taliban dressed as soldiers, faked injury in deadly attack on Afghan base 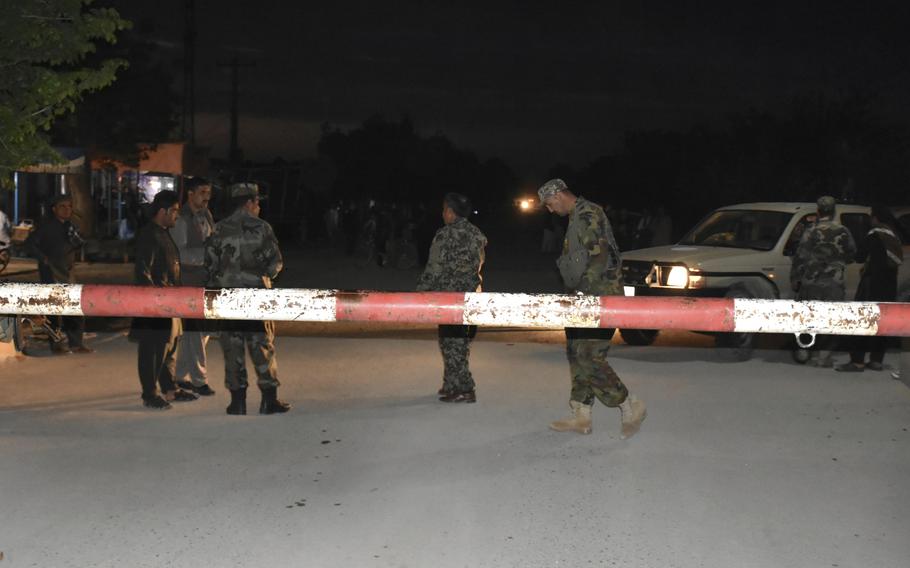 Afghan soldiers stand guard at the gate of a military compound after an attack by gunmen in Mazar-e- Sharif province north of Kabul, Afghanistan, Friday, April 21, 2017. (Mirwais Najand/AP)

Afghan soldiers stand guard at the gate of a military compound after an attack by gunmen in Mazar-e- Sharif province north of Kabul, Afghanistan, Friday, April 21, 2017. (Mirwais Najand/AP) An injured soldier recovers in a hospital after Friday's attack at a military compound in Mazar-e-Sharif province north of Kabul, Afghanistan, Saturday, April 22, 2017. (AP)

KABUL, Afghanistan – A Taliban attack on an Afghan base Friday could turn out to be country’s deadliest on an Afghan military installation and is raising questions about the army’s ability to hold off the Taliban, which are seeking to topple the country’s central government.

A spokesman for the Afghan Ministry of Defense said more than 100 people were killed and wounded in Friday’s attack on a mosque at the headquarters of the army’s 209th Corps. Other reports put the casualty figures at 140 or more.

There are no reports of coalition casualties, although German military advisers, from NATO's Train Advise Assist Command-North, often collaborate with troops on the base, which is near Mazar-i-Sharif. A Resolute Support spokesperson did not respond to an email asking whether any coalition personnel were on the base at the time of the attack.

A statement from Gen. John Nicholson, the top U.S. and NATO commander in Afghanistan, condemned the attack as “barbaric” because it targeted a place of worship. “All of us at the NATO Resolute Support Mission condemn such murderous and reprehensible actions,” the statement said.

The Taliban said the attack was launched in revenge for the killing of two of their “shadow” governors in the northern part of the country. A statement from the group noted that the base was a primary launching point for night raids and other operations in the region.

Gen. Dawlat Waziri, a Defense Ministry spokesman, said he expects the death toll to rise because many of the wounded were in critical condition. Initial reports said eight soldiers were killed in the attack.

A statement from President Ashraf Ghani posted to Twitter said he “condemns the cowardly attack.” Ghani traveled Saturday to Mazar-i-Sharif to visit members of the 209th Corps.

The attack happened about 1:30 pm Friday when as many as 10 militants dressed as soldiers and driving Afghan army vehicles talked their way onto the base by feigning a casualty they said needed urgent medical care at the base clinic.

Once on the compound, they targeted a mosque full of unarmed soldiers performing Friday prayers. It took several hours for Afghan commandos to put down the attack.

Waziri said that as the attackers approached the base, one of them had an IV in his arm. He said they claimed to be from another brigade, whose name the guards recognized. Guards called to a central command center that gave them permission to let the “soldiers” through.

The militants similarly passed through a second checkpoint. The attack only began at the third checkpoint when guards were instructed to take the presumed soldiers’ weapons. In response, one of the militants detonated an explosive vest, and the others raced toward the mosque.

The Taliban said in statement that could not be independently verified that four of the attackers had served as soldiers and knew the layout of the base. It was not clear if they had joined the army as Taliban infiltrators or were soldiers who had defected.

The ability of attackers to penetrate one of the largest bases in the north was viewed as a shocking failure on the part of security and intelligence agencies. Some reports said many soldiers inside the mosque were shot in the back as they prayed.

“People are joining the army with the purpose of defending their country and their people,” said Dr. Orzala Nemat, the director of an Afghan think tank. “Those in the leadership of these army units must be extra cautious to make sure these compounds are protected.”

On Saturday, family members gathered outside the base to identify their relatives. Coffins were already being loaded onto vehicles to send the victims’ bodies home to their families.

The attack does not bode well for the Afghan army as it prepares to enter its third fighting season since the majority of NATO combat troops left the country. The military has been plagued by corruption, including commanders diverting salaries and supplies to line their own pockets. A hardening of the perception that officers aren’t caring for their troops properly could affect recruiting.

Over the last three years, the Taliban have taken over major swaths of key provinces, often overrunning military installations where they’ve captured Afghan military vehicles, weapons and gear like those they used to execute Friday’s attack.

A local news outlet reported that the Afghan defense minister had visited the base two days before the attack. The report said the governor of Balkh province, where the base is located, had raised concerns that the country’s security forces weren’t doing enough to fight the Taliban, who have been infiltrating the area.