Taliban attacks in Kabul, Kunduz show ability to strike at will An Afghan police officer walks toward the site of a Taliban attack on the Parliament building in Kabul on Monday, June 22, 2015. (Carlo Munoz/Stars and Stripes)

An Afghan police officer walks toward the site of a Taliban attack on the Parliament building in Kabul on Monday, June 22, 2015. (Carlo Munoz/Stars and Stripes) Afghan security forces cordon off the site of a complex attack on the Parliament building in Kabul on Monday, June 22, 2015. The Taliban claimed responsibility for the strike. (Carlo Munoz/Stars and Stripes) 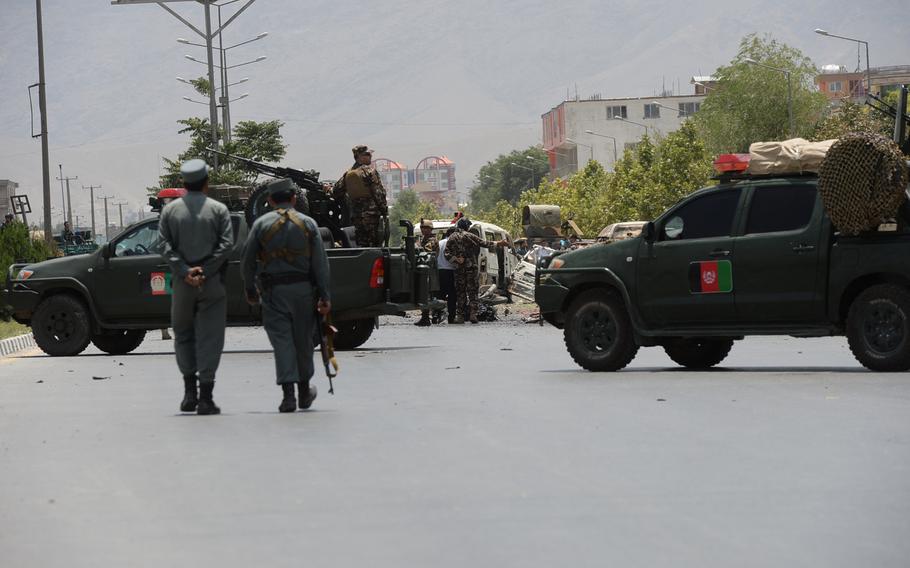 Members of the Afghan military and police survey the damage from several rocket-propelled grenades launched at the Parliament building during an attack claimed by the Taliban on Monday, June 22, 2015. (Carlo Munoz/Stars and Stripes) An Afghan police vehicle sets up a security cordon in front of a building damaged during a complex attack by Taliban insurgents on the Afghan Parliament building in Kabul on Monday, June 22, 2015. (Carlo Munoz/Stars and Stripes) 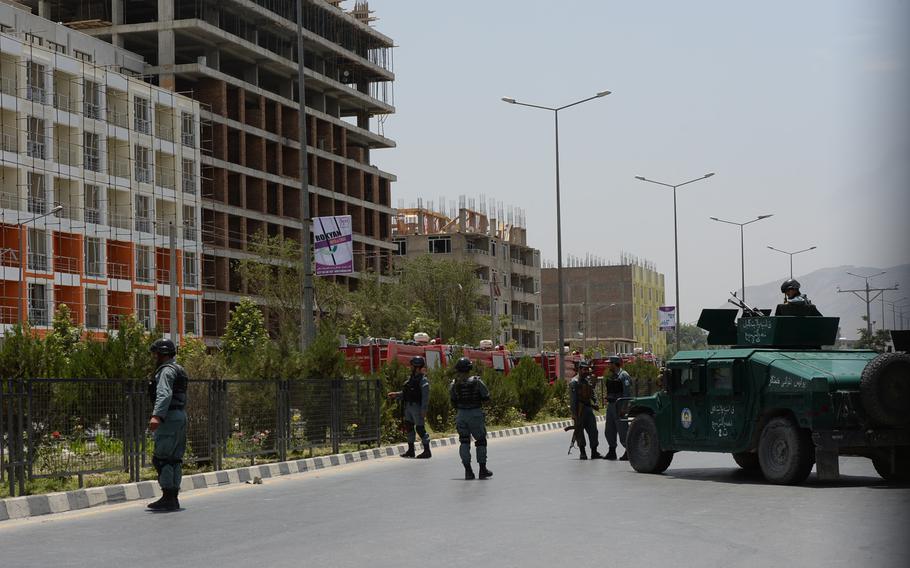 Afghan security forces cordon off a construction site where Taliban insurgents launched multiple rocket-propelled grenades at the Parliament building during an attack on Monday, June 22, 2015, in Kabul. (Carlo Munoz/Stars and Stripes)

KABUL, Afghanistan — Taliban insurgents attacked Afghanistan’s parliament Monday as lawmakers were preparing to vote on a new defense minister, sending a message that they can attack at will, despite tight security around the capital.

In the north, militants seized a second district in as many days, routing government forces trying to hold off the insurgent advance, further underscoring weaknesses in the Afghan defense forces ability to effectively counter Taliban attacks.

In the Kabul attack, Taliban spokesman Zabihullah Mujahid made clear the Taliban had targeted Defense Minister nominee Masum Stanekzai, who was in the parliament building. Mujahid told The Associated Press the attack showed the insurgents “can even attack the parliament in the capital.”

The attackers detonated a car bomb near the entrance to the parliament, police and eyewitnesses said, then fired rocket-propelled grenades, with at least one hitting the roof of the lower house, said lawmaker Sayed Muhiudin Mehdi.

Despite extensive security measures in the Afghan capital, the Taliban have repeatedly shown “they can carry out attacks wherever they want” in Kabul and elsewhere in the country, said Najeeb Mahmoud, professor of law and political science at Kabul University. The fact that the attack took place while Stanekzai and Vice President Sarwar Danish were present is a significant achievement for the insurgent group, even if the assault was quickly repelled by the security forces, Mahmoud said.

All six guerrillas were killed by Afghan security forces before they could enter the parliament building, officials said. By midday, Afghan military and police forces had secured the building and the surrounding neighborhoods.

Legislators and staff were quickly evacuated after the attack began, but one lawmaker said the guards appeared not to have a clear plan.

“There was no preparation to lead (people) to a safe place,” Fawzia Koofi said in a telephone interview shortly after the strike. “God forbid what would have happened if they (the insurgents) got inside.”

Officials from the U.S. Embassy and the U.N. Assistance Mission in Afghanistan quickly condemned the attack.

It showed a “blatant disrespect for democracy and the rule of law,” American diplomats said in a statement.

Members of the 249-seat legislature had gathered to vote on the confirmation of Stanekzai, President Ashraf Ghani’s nominee for defense minister. The Cabinet has been without a defense minister for several months, and Stanekzai’s nomination was submitted to the legislature on May 24.

The attack in Kabul coincided with the Taliban’s continued assault on districts and provinces in northern Afghanistan, traditionally seen as one of the most secure regions in the country.

On Monday, the Taliban scored a significant tactical victory by taking the second district center in the strategically important northern province of Kunduz in as many days.

“The center of Dasht-e-Archi district and 14 checkpoints around it have been captured by the Taliban. The white flag of the Islamic Emirate is now flying over it,” Taliban spokesman Mujahid said in a statement.

The district chief confirmed to Afghan news outlets that the district center, about 30 miles north of the provincial capital of Kunduz, had fallen after being surrounded by the insurgents. Kunduz, also known as the gateway to the north, is considered strategically vital because it lies on the road linking Kabul and Mazar-e-Sharif, the biggest city in northern Afghanistan.

Over the weekend, Taliban fighters also overran the center of Char Dara district, about 10 miles southwest of Kunduz city, in an apparent effort to surround the provincial capital. Kunduz, a city of about 1 million people, was one of the last cities then under Taliban control to fall in 2002 to the forces of the Northern Alliance, which was backed by U.S. forces following the 2001 U.S.-led invasion.

The capital of Kunduz province was nearly overrun in a sudden attack in April, but was saved by government reinforcements flown in from other parts of the country.

The Taliban launched their summer offensive in April — the first fighting season since most U.S. and NATO forces were withdrawn following the end of the combat mission in 2014. Although there are still about 13,000 Western troops in the country, their main mission is to train and assist the Afghans, and they have mostly stayed out of combat operations.

Much of the fighting in this year’s campaign has taken place in Afghanistan’s northern regions.

Although the Taliban guerrillas are overwhelmingly outnumbered by government troops and police, they have demonstrated an ability to quickly mass hundreds of fighters for surprise attacks against government strongholds. Earlier this month, about 300 insurgents overran Yangam district, a remote region in northeastern Badakhshan province. They withdrew within a week after government reinforcements mounted a counterattack.