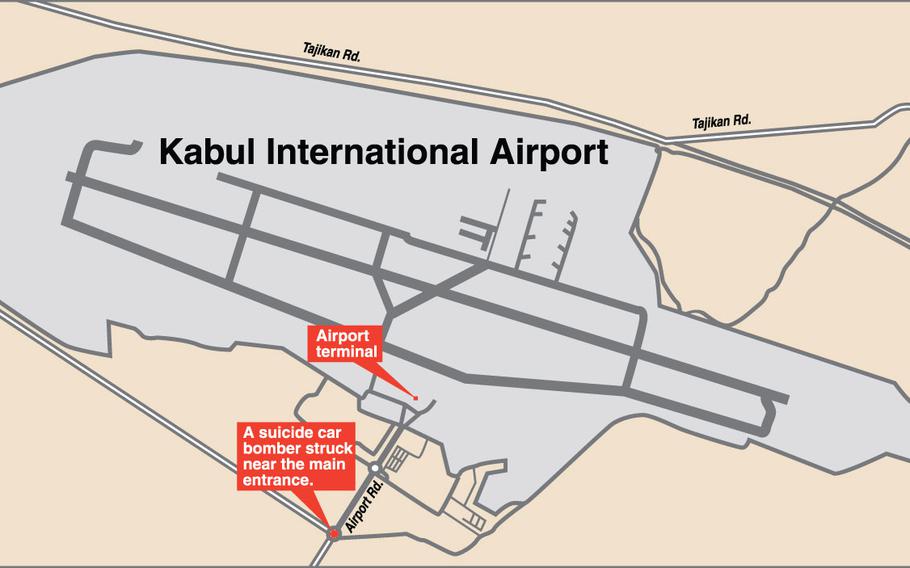 KABUL, Afghanistan — A suicide car bomber struck Monday near the main entrance to Kabul International Airport, killing at least five people and injuring 16 — the latest in a wave of deadly attacks that have killed more than 50 people, including an American Green Beret, and wounded hundreds since Friday.

Hours after the latest attack, President Ashraf Ghani demanded that Pakistan crack down on the Taliban, which maintain sanctuaries on Pakistani soil. “We need all those activities to be stopped," Ghani said in a nationwide television address.

The attacker was trying to enter the airport compound Monday with an explosives-packed vehicle when he was stopped by police, said Najeeb Daneesh, deputy spokesman for the Interior Ministry. The blast killed four police officers and one civilian bystander, he said.

Among the civilian casualties were at least one woman and one child, Health Ministry spokesman Wahidullah Mayar said on Twitter.

The Taliban claimed responsibility for the attack on Twitter, saying they had targeted a foreign military convoy and had destroyed two armored vehicles.

No members of the NATO-led military mission in Afghanistan were reported to be involved in the attack, a spokesman for the coalition said, and no coalition military vehicles were visible at the site. The entrance is the main one used routinely by civilian travelers rather than military convoys.

Kabul was already on high alert following last Friday’s attacks, which the United States said was the worst day of violence in the Afghan capital since 2009. Among those killed Friday was an American special operations soldier, Master Sgt, Peter A. McKenna Jr., of Rhode Island, assigned to the 7th Special Forces Group based at Eglin Air Force Base in Florida.

The recent attacks followed a change of leadership in the Taliban after confirmation of the death of their spiritual leader Mullah Mohammad Omar two years ago. The leadership change, which installed Mullah Akhtar Mansoor as the new Taliban leader, has sharpened factional rivalry in the insurgent tanks and has for the moment derailed resumption of peace talks with the Afghan government.

Pakistan hosted the first official round of Kabul-Taliban negotiations last month, but a second session was postponed indefinitely after the government announced Mullah Omar’s death.

The violence has strained relations with Pakistan, which many Afghans believe has harbored Taliban leaders for years. Ghani had made improving relations with Pakistan a priority of his administration in hopes the government in Islamabad would help rein in the extremists and bring them to the conference table.

In the wake of the latest attacks, Ghani appeared to step back Monday on the peace talks, saying in his televised speech that “we don’t want Pakistan to bring the Taliban to peace talks, but to stop the Taliban's activities on their soil."

“We know they have sanctuaries there, we know they are active there,” Ghani said. “We need all those activities to be stopped.”

Witnesses said the Monday blast hit the first checkpoint at the civilian entrance to the airport. One airport employee, who asked not to be named, said he was arriving for his afternoon shift when the bomb detonated near the checkpoint 30 or 40 yards behind him.

The blast hurled him and others to the ground and sent a massive cloud of dust and smoke swirling toward them. When the dust cleared, many people could be seen bloodied and screaming on the ground, he said.