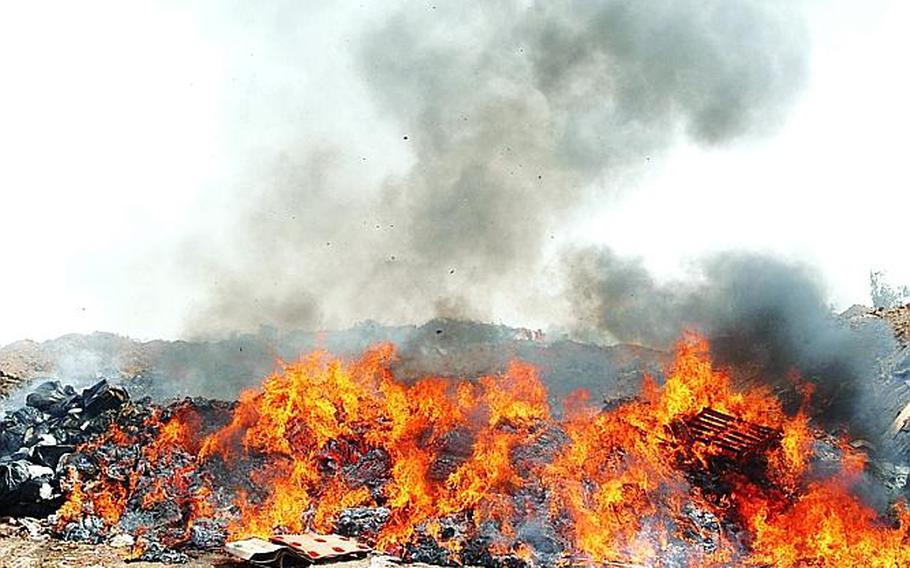 Nearly 7 percent of troops surveyed who spent time at Balad Air Base in Iraq came home with serious respiratory illnesses, according to a new study. Researchers believe the burn pit that operated at the base earlier in the war is at least partially to blame. (Michael Gisick/Stars and Stripes)

The report, to be published in this month&rsquo;s Allergy and Asthma Proceedings, is the latest to highlight the toxic nature of exposure to smoke from burn pits, which are used by troops to dispose of everyday trash, broken furniture, excess combat equipment and even human waste.

Researchers at Stony Brook University in New York found elevated levels of acute respiratory illnesses, asthma and lung damage among veterans who served at Balad Air Base early in the Iraq war.

The burn pit covering multiple acres on the outskirts of the base has been a frequent target for environmental and health researchers, particularly after a 2006 Air Force study noted that its size and proximity to soldiers&rsquo; housing made it &ldquo;an acute health hazard.&rdquo;

Nearly 7 percent of the 920 troops surveyed who were deployed at Balad returned with respiratory injuries, compared to only about 4 percent among troops stationed stateside. Dr. Anthony Szema, lead author of the study, called that a statistically significant increase.

&ldquo;We shouldn&rsquo;t be seeing these injuries,&rdquo; he said. &ldquo;But we&rsquo;re not supposed to be living 100 yards away from where they&rsquo;re burning water bottles and other waste either.&rdquo;

The report comes days after the American Lung Association urged Defense Department officials to immediately shut down burn pits in Iraq and Afghanistan, noting that their emissions contain known and suspected carcinogens, among other dangerous chemicals.

The Balad burn pits were shut down late last year. U.S. Central Command officials have pledged to eliminate all remaining burn bits in Iraq by December, but they are still in use throughout Afghanistan, particularly at smaller bases in remote areas.

Defense Department researchers insist that toxic smoke from the pits is not to blame for an increase in cancer cases and respiratory illnesses among troops stationed near them. But in December, Dr. Craig Postlewaite, director of the department&rsquo;s force health protection programs, promised to re-examine the issue, saying that exposure to dust and sand, cigarette smoke and unknown particulates from the pit smoke could play a factor in the health problems.

In a statement Thursday, Postlewaite said that his office &ldquo;fully supports CENTCOM&rsquo;s role in reducing exposures to the smoke, and their intent to eliminate burn pits wherever and whenever feasible.&rdquo; He added that research into the effects is ongoing.

The new asthma report tracked more than 6,200 health files of veterans at the Northport veterans medical center in New York. The veterans had separated from the Army between 2004 and 2007. Szema, who has been studying the effects of burn pits on troops for years, acknowledged that the research doesn&rsquo;t show a direct connection to the burn pits, but he said it does show clearly that something at Balad caused a rise in respiratory illnesses.

Szema said he has also begun to see more reports of troops returning from war with irreversible lung damage, and soldiers who aren&rsquo;t responding to traditional medications to cope with shortness of breath and chest pains.

Numerous class-action lawsuits related to alleged burn pit illnesses have been filed in federal courts, covering contractors and soldiers exposed to the pits.