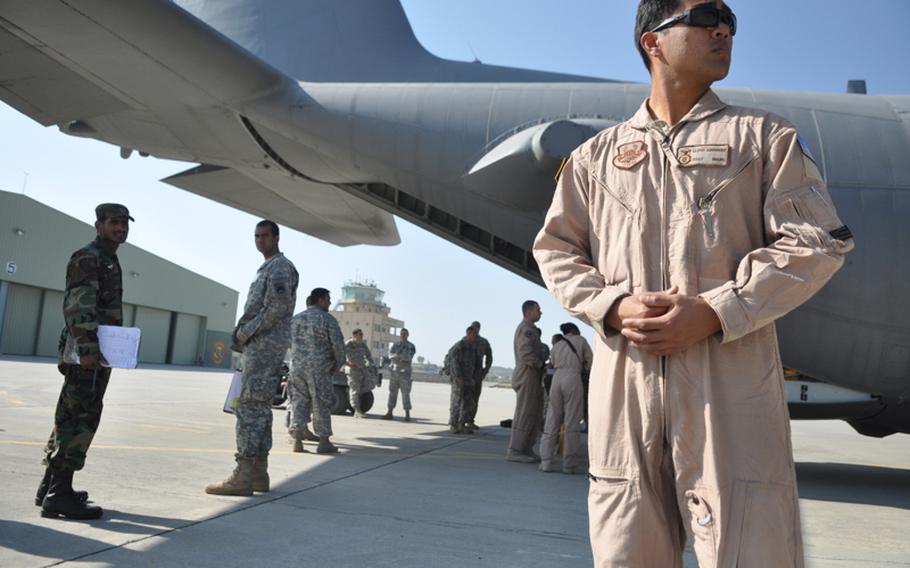 Staff Sgt. Lloyd Guerrero stands guard as a Pakistani customs inspector looks on while cargo is off-loaded from a U.S. Air Force C-130 at a small airstrip in Ghazi, Pakistan. (Heath Druzin/Stars and Stripes)

Staff Sgt. Lloyd Guerrero stands guard as a Pakistani customs inspector looks on while cargo is off-loaded from a U.S. Air Force C-130 at a small airstrip in Ghazi, Pakistan. (Heath Druzin/Stars and Stripes) 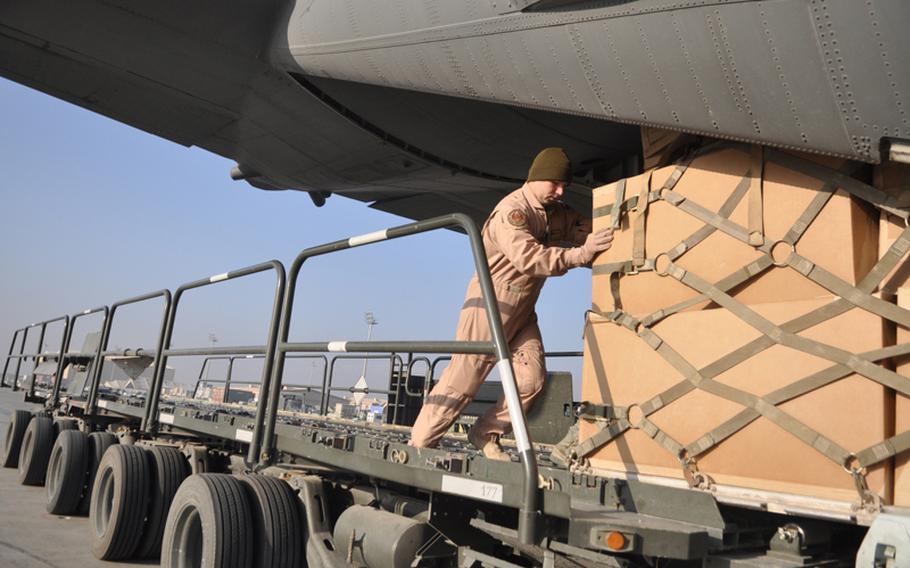 Air National Guard Staff Sgt. Anthony Legotti helps load boxes of supplies onto a C-130 cargo plane at Bagram Air Field in Afghanistan as part of the tail end of the humanitarian effort to aid flood victims in Pakistan. Legotti is a member of the Ravens, a group of specially trained troops who guard military aircraft. (Heath Druzin/Stars and Stripes) 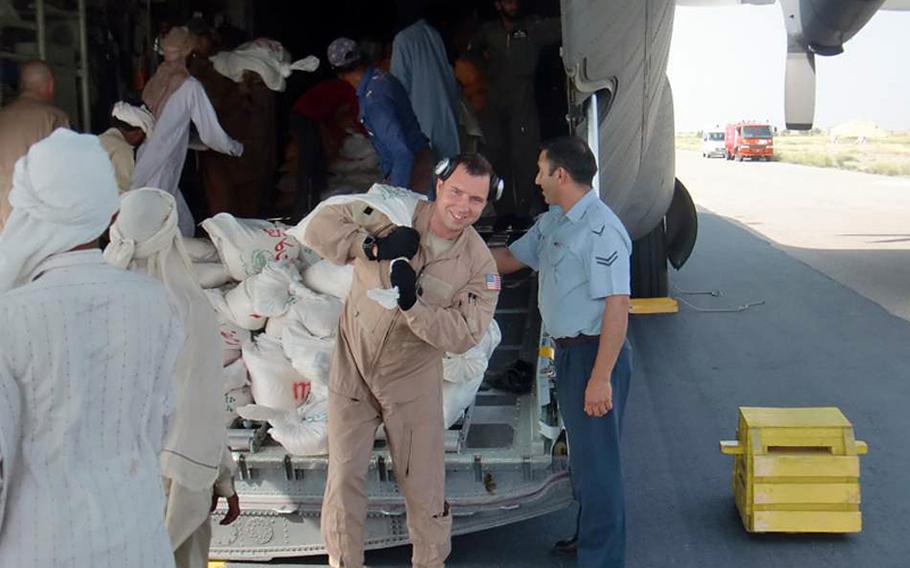 GHAZI, Pakistan &mdash; The waters have receded, and with them the seething throngs of refugees grasping for sacks of flour and rice. Staff Sgt. Anthony Legotti and his teammates can now concentrate on nosy customs inspectors instead of keeping desperate flood victims from stowing away on U.S. military planes.

Legotti is a member of the highly specialized Phoenix Raven program, which, with its offshoot, the Fly Away Security Teams (FAST), has more than 30 troops operating out of an undisclosed base in Southwest Asia and Bagram Air Field, Afghanistan.

They spent much of the summer hopping from the windswept Himalayan highlands of northeast Pakistan to the malarial river valleys in the south of the country during flood relief operations, in addition to their normal duties, which take them across Afghanistan, and the wider Central Asia and Middle East region.

The Phoenix Raven and FAST programs train military police, mostly members of the Air Force, to protect aircraft while they are on the ground in areas with shaky security situations, or when high-ranking U.S. officials are traveling. Those guys in suits and shades at the bottom of Air Force One&rsquo;s steps when the president walks down? They&rsquo;re not Secret Service, they&rsquo;re Ravens.

Members of the Raven and FAST teams are trained to be a mix between personal security details and diplomats. They learn both hand-to-hand combat and so-called &ldquo;verbal judo,&rdquo; a technique used to smooth over potentially volatile situations.

&ldquo;We [are] there to do security, but we&rsquo;re also ambassadors of the United States,&rdquo; said Legotti, 31, a New York Air National Guardsman from Long Island.

The teams are charged with keeping aircraft, aircrews and officials safe, and keeping foreign officials from taking too close a look inside U.S. military aircraft. The aircraft are treated like an embassy and considered U.S. soil while abroad. When a plane breaks down in an area where it needs to be protected, it&rsquo;s the security team&rsquo;s home for as long as it takes to get it back in the air. Legotti&rsquo;s troops have spent as many as five days living on a plane during their deployment.

In most countries outside the war zones of Afghanistan and Iraq, the security teams are not allowed to carry weapons outside the planes, necessitating the hand-to-hand combat skills. Their jobs also mean a lot of interaction with foreign customs inspectors, troops and officials on their home soil, which is where the verbal judo comes in.

In July, severe flooding in Pakistan swept away entire villages, killing around 2,000 people, leaving millions homeless, and creating a humanitarian disaster in a volatile country already beset by terrorism and instability.

The U.S. government offered assistance, and on short notice Air Force crews flew into remote, unsecured airstrips in contested regions of a sometimes problematic ally &mdash; one with an active Taliban insurgency that seems to have as many friends as enemies among the country&rsquo;s security forces. The security teams flew night and day, bringing aid to towns like Skardu, a Himalayan enclave near 28,000-foot K2 in the northeast &mdash; the world&rsquo;s second-highest peak &mdash; to Ghazi in the damp, broiling lowlands to the south.

Complicating the task of the security teams was the stipulation that they could not carry weapons outside the aircraft on Pakistani soil.

Part of the mission was to airlift flood victims out of the flood zones and at many of the airstrips hundreds of people would surge toward the aircraft, trying to board. There was little control and it was impossible to keep an eye on everyone.

&ldquo;As soon as you step out of the airplane you have to be prepared,&rdquo; said Staff Sgt. Jason Balcita, a Raven who oversees FAST operations out of Bagram and did much of the coordination for the security teams responding to the flooding.

Already stretched thin protecting aircraft in Afghanistan, the security teams were routinely putting in 18-hour days in the tropical heat, sweating through their flight suits day after day with barely any sleep in between missions, let alone time for laundry.

In one week in September, 16 two-man teams flew 55 missions in Pakistan and Afghanistan, helping deliver more than 900 tons of aid and cargo.

The security teams found themselves helping lug pallets of aid in remote areas where the Pakistani military lacked the equipment to efficiently off-load heavy cargo, and even handing out candy to children when they had a spare moment. At times, they had to work to keep refugee families together when children and parents got separated in the chaotic scrums that developed when there were fewer seats on an airlift plane than refugees.

The security teams still fly to Pakistan from time to time, but with the aid campaign nearly finished, the flights are mostly to bring U.S. troops back home and to pick up gear no longer needed. Reflecting on their role in the flood relief, the security team members see their efforts as a diplomatic effort in a country with widespread anti-American feelings and Islamic extremism.

&ldquo;A lot of them really didn&rsquo;t like Americans, but I think us being there &hellip; helped make America look a little better because it changed their perceptions of Americans,&rdquo; said Senior Airman Jordan &ldquo;Gunny&rdquo; Gunterman, 20, of Powderly, Ky.

Legotti hopes the efforts will be remembered down the road.

&ldquo;When those 10-year-old kids are 15 and have an opportunity to pick up a gun and use it against Americans, hopefully they&rsquo;ll think of Gunny giving out candy and choose a different path.&rdquo;