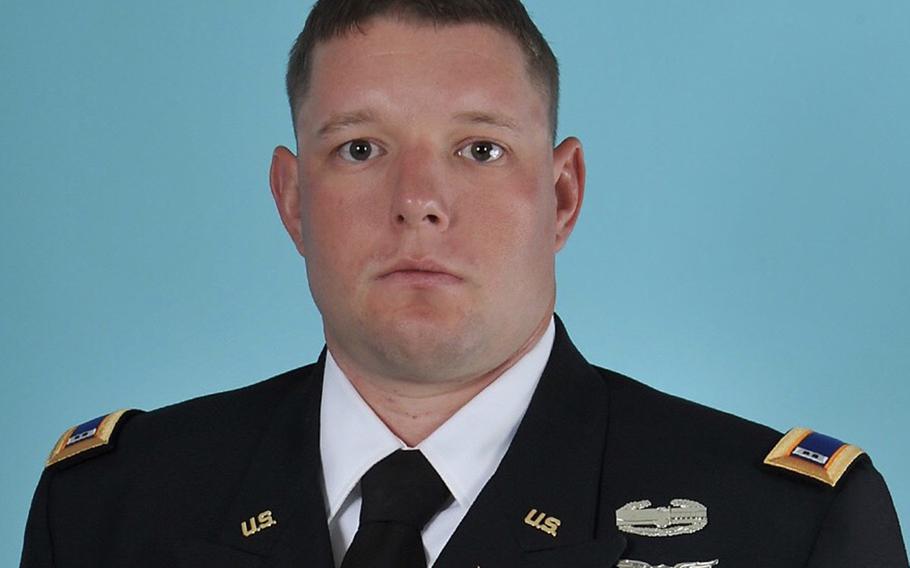 The Pentagon has identified the soldier killed in a helicopter crash this week in western Iraq as Chief Warrant Officer 3 Taylor J. Galvin.

Galvin, 34, of Spokane, Wash., died in Baghdad from injuries sustained when the helicopter in which he was traveling crashed early Monday in Sinjar in Iraq’s Nineveh province. Pentagon officials said that the chopper had been participating in a nighttime raid against an Islamic State target.

There were no indications that it was downed by enemy fire, said a statement from the U.S.-led anti-ISIS coalition known as Inherent Resolve. All personnel were recovered after the crash. Three other servicemembers were evacuated for additional treatment.

U.S. and coalition forces are primarily fighting ISIS in its last strongholds in eastern Syria’s Middle Euphrates River Valley, but they also target remaining ISIS terrorist cells in other parts of Syria and Iraq. The coalition partners with Iraqi security forces for operations in Iraq and with Syrian Democratic Forces to fight ISIS in eastern Syria.

The coalition recently began its third phase of a mission to clear ISIS from the eastern Syrian town of Hajin, which Pentagon officials have said is the terrorist’s final stronghold.

Beginning as a task force made up of 101st Airborne Division soldiers, the unit first saw operational use during the invasion of Grenada in 1983, later gaining notoriety after being featured in the book “Black Hawk Down” and its movie adaptation.

The regiment, which specializes in dangerous night operations and is known as the Night Stalkers, serves as the primary aviation unit for U.S. Special Operations Command and often ferries the Army’s Delta Force, Navy SEALs and other U.S. commandos to and from dangerous missions. In the decades since the regiment was officially activated in its current form, it has expanded to meet demands for its assets.

The three MH-60 Black Hawk variants in the unit’s inventory are significantly upgraded versions of the utility helicopter that entered service in the U.S. Army in 1979, according to the U.S. Special Operations Command. Among the modifications made for commando missions are an aerial refueling capability and improved navigation systems, which reportedly includes terrain-following radar to aid in low-level nighttime flying.

Before joining the elite aviation unit in 2015, Galvin had deployed as Black Hawk instructor pilot twice to Iraq and once to Afghanistan, said Lt. Col. Robert Bockholt, a spokesman for the Army’s Special Operations Command. After joining the Army in 2003 as a CH-47 aircraft mechanic, he was accepted into Warrant Officer Candidate School in 2007 and graduated flight school the following year.

A combat veteran, he had received numerous awards and decorations, including the Air Medal with the combat “C” device and a Combat Action Badge. By the time of his death, Galvin had racked up nine deployments — two supporting Operation Iraqi Freedom, three as part of the Afghanistan mission Operation Enduring Freedom and four in support of the anti-ISIS Operation Inherent Resolve.

It’s not clear whether Galvin was piloting or co-piloting the aircraft when it crashed. Bockholt referred all questions about the mission and the status of the other injured troops to Operation Inherent Resolve. The coalition did not immediately respond to phone calls or an email inquiry.

Galvin is the third member of the 160th SOAR to be killed in an aviation mishap in the Central Command area of operations in less than a year.

In late August 2017, Staff Sgt. Emil Rivera-Lopez, a crew chief with the regiment, was killed when a Black Hawk crashed off the coast of Yemen during a training exercise.

Chief Warrant Officer 2 Jacob Sims, a pilot with the regiment, was killed in a helicopter crash in Afghanistan’s Logar province, last October.

The large number of deadly aviation incidents this year, including crashes during training outside of combat zones, has raised concerns among lawmakers in Washington. The latest defense spending bill created an independent military aviation commission to review the causes of such incidents and make recommendations to prevent them.

Galvin’s death brings to 11 the total number of U.S. troops killed in Iraq and Syria this year. He is the eighth American killed in a helicopter crash in Iraq; in March, seven servicemembers were killed in the downing of an Air Force HH-60 Pave Hawk in western Anbar province.