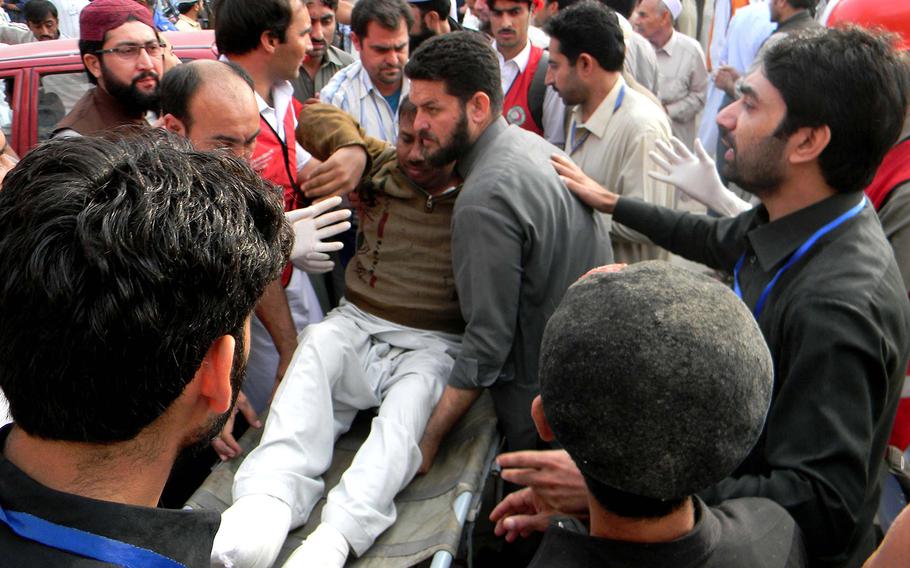 An injured man is transferred to a hospital after a severe earthquake on Oct. 26, 2015 in northwest Pakistan's Peshawar. (Ahmad Sidique, Xinhua/Zuma Press/TNS)

KABUL, Afghanistan — A massive earthquake struck northern parts of Afghanistan and Pakistan on Monday, killing more than 170 people, sending terrified survivors fleeing into the streets and shaking buildings as far away as India, officials said.

The majority of the deaths were in Pakistan, where The Associated Press reported at least 147 people were killed. In Afghanistan, 33 people died and more than 200 were injured. Among the dead were 12 students at a girls’ school in northern Afghanistan.

The U.S. Geological Survey reported that the quake had a magnitude of 7.5 and was centered in the Hindu Kush region, about 50 miles south of Fayzabad, capital of Badakhshan province in northern Afghanistan.

The nearly 10,000 American troops in Afghanistan did not report any damage, and the U.S. has not received any requests for assistance, Lawhorn said.

The U.S. Embassy in Kabul and the NATO-led Resolute Support coalition released statements offering condolences to victims of the earthquake and said the organizations are ready to help if requested by the Afghan government.

There were initial reports that one child was killed and nearly 100 buildings collapsed in Badakhshan, said Abdullah Humayoon Dehgan, the provincial director of the national disaster management authority. The province has been the site of several deadly landslides over the past two years that killed as many as 2,000 villagers.

The girls died in a stampede as they tried to leave a high school in neighboring Takhar province, said Sonatulah Taimor, a spokesman for the provincial governor. Twenty-four other girls were hospitalized. While the school did not collapse, as many as 60 other buildings were damaged in the province, he said.

In Nangarhar province, in eastern Afghanistan, six people died and 69 wounded were admitted to hospitals. Those numbers are expected to rise as casualties from more remote areas arrive, said Mujib Ullah Kammawal, a provincial health official.

The quake, which occurred about 1:40 p.m. local time, shook buildings, briefly knocked out power in some areas in Kabul, and disrupted some telephone communications. Many residents in the city rushed into the streets.

Abdullah Abdullah, chief executive of the power-sharing government, called an emergency meeting with the National Disaster Management Authority to assess the damage and needs, especially in the more “vulnerable” northeastern part of the country, his office said in statements on Twitter.

In Pakistan, Zahid Rafiq, an official with the meteorological department, told the AP that the quake was felt across the country. The temblor was also felt in the Indian capital New Delhi, where buildings swayed, the AP reported.