Russia responds to US proposed terms of safe flight over Syria 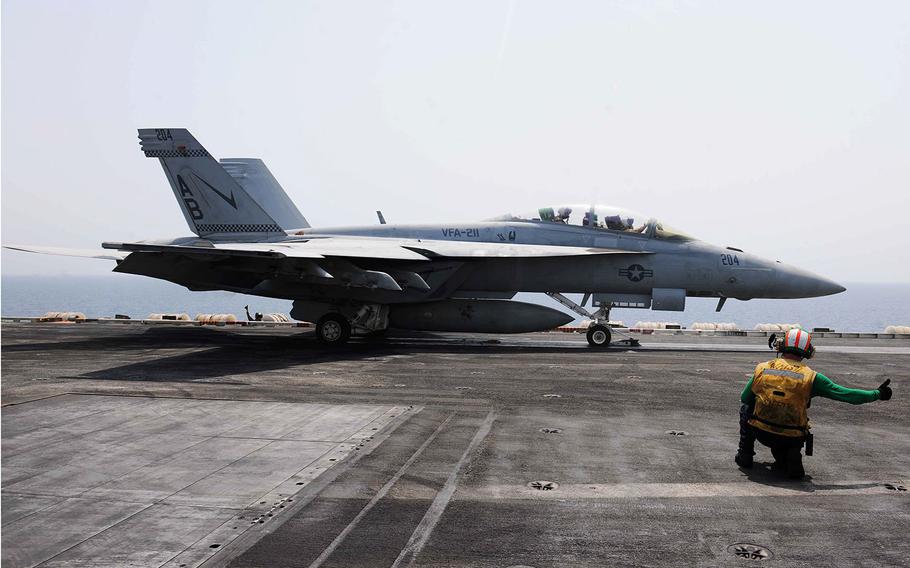 A safety observer gives the approval for an F/A-18F Super Hornet to launch on the flight deck aboard the aircraft carrier USS Theodore Roosevelt on Sept. 7, 2015. Theodore Roosevelt is deployed in the U.S. 5th Fleet area of conducing strike operations in Iraq and Syria. (Stephane Belcher/U.S. Navy)

WASHINGTON — The U.S. and Russia are closer to agreement on the terms of safe flight over Syria to which each nation is pledging to adhere, the Pentagon said Friday.

The U.S. sent Russia a draft proposal last week on what common languages, radio frequency channels and distances that U.S., coalition and Russian aircraft would abide by to avoid mishaps when both are flying in Syrian airspace.

On Friday, the Pentagon confirmed that they’d received the Russian response and that it would likely respond over the weekend.

“The Department of Defense has received a formal response from the Russian Ministry of Defense regarding DOD’s proposal to ensure safe air operations over Syria,” Pentagon spokesman Peter Cook said in a statement Friday. “Department leaders are reviewing the Russian response, and talks are likely to take place as soon as this weekend.”

The Russians’ response follows more than a week of quickly escalating tensions and rhethoric between the U.S., NATO, and Russia after Russia initiated airstrikes last week against reported Islamic State targets in Syria.

The Russian activity and the potential risks it brought to U.S. and coalition pilots led Defense Secretary Ash Carter to hold the first military-to-military talks with Russia since the U.S. cut off relations in response to Russia’s incursion into the Ukraine last year.

Since the talks, Russian aircraft have violated Turkish airspace and had a close encounter with at least one U.S. aircraft over Syrian airspace, and a Russian warship has fired cruise missiles into Syria from the Caspian Sea.

Each instance has been followed with dueling information campaigns.

Russia denied that the incursions over Turkey were on purpose, a position NATO Secretary General Jens Stoltenberg and Carter have emphatically challenged. And Russia strongly denied U.S. reports that four of the 26 cruise missiles it fired malfunctioned and hit Iran instead.

At a news conference Friday in London with his British counterpart, Defense Minister Michael Fallon, Carter said that although the cruise missiles did not pose a threat to the daily U.S. and coalition sorties flown over Syria, the lower altitude in which cruise missiles travel creates unpredictability and increases risks for all parties.

“For the Russians to have done that without giving any warning is further indication that they're not thinking through the consequences of their conduct,” Carter said.

When asked what steps the U.S. or coalition would take to better protect its pilots in the increasingly contested airspace, Carter said, “I believe we’ve made it clear, and the Turks have made it very clear that we’re not prepared to have any impediments to our conduct of our counter-[Islamic State] campaign,” but he did not offer specifics.