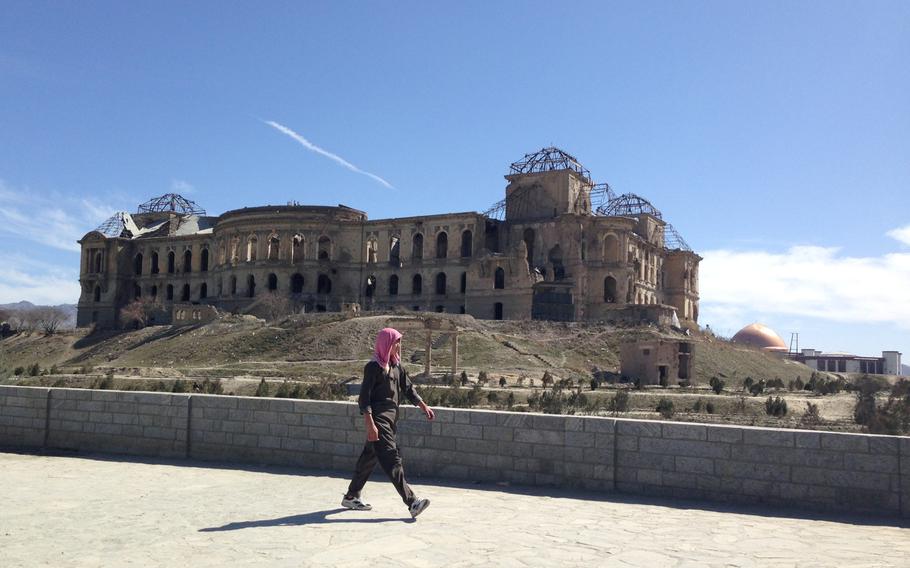 A pedestrian passes the remnants of Kabul's Darul Aman Palace on Sunday, Feb. 28, 2016. The palace, built nearly 100 years ago to house the national parliament, was destroyed in the 1990s during Afghanistan's civil war. It is now set to be restored. In the background is the dome of the new parliament building. (Slobodan Lekic/Stars and Stripes)

A pedestrian passes the remnants of Kabul's Darul Aman Palace on Sunday, Feb. 28, 2016. The palace, built nearly 100 years ago to house the national parliament, was destroyed in the 1990s during Afghanistan's civil war. It is now set to be restored. In the background is the dome of the new parliament building. (Slobodan Lekic/Stars and Stripes) 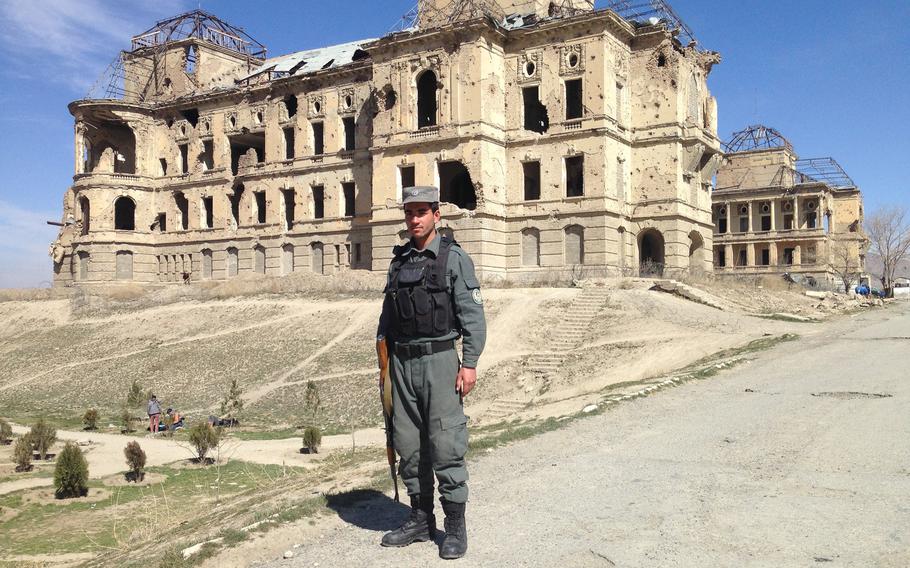 A police officer guards the main driveway to Kabul's bombed-out Darul Aman Palace on Sunday, Feb. 28, 2016. Reconstruction work on the complex, destroyed in fighting between rival warlords in the 1990s, has recently started. (Slobodan Lekic/Stars and Stripes) 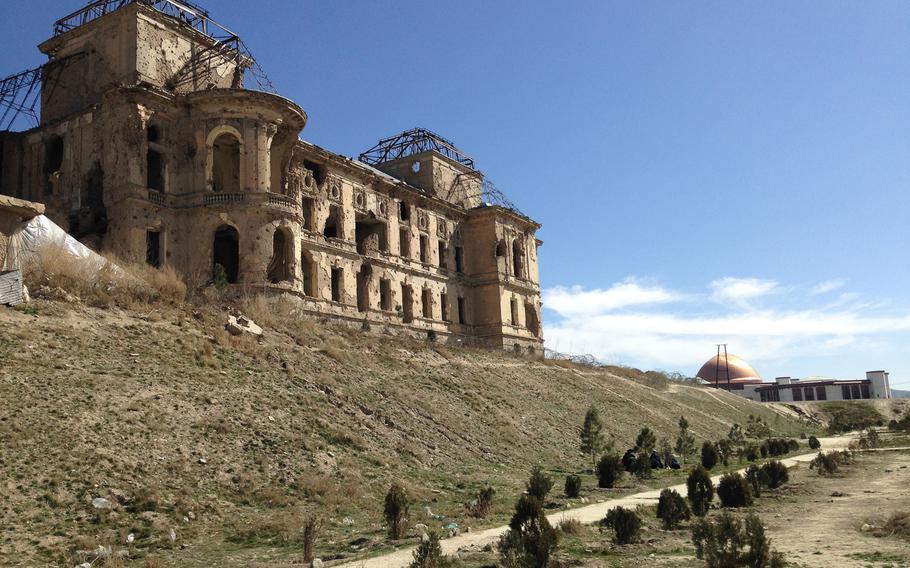 A view of the destroyed Darul Aman Palace and the former royal gardens on the outskirts of Kabul on Sunday, Feb. 28, 2016. In the background is the new building of Afghanistan's national parliament. (Slobodan Lekic/Stars and Stripes) 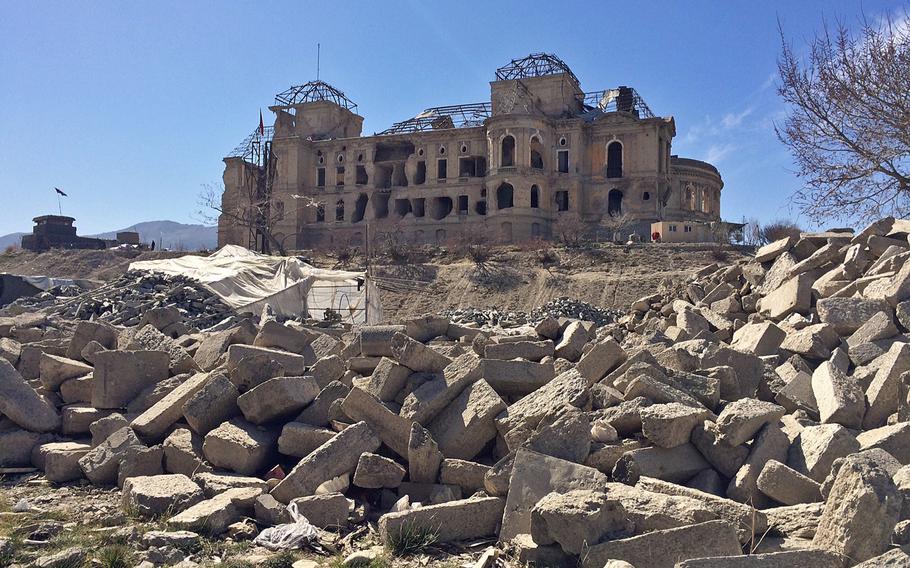 Heaps of stone have been trucked to Kabul's Darul Aman Palace, where they will be used to build a wall around the sprawling complex, seen here on Sunday, Feb. 28, 2016. Work to restore the palace, destroyed in Afghanistan's civil war in the 1990s, will take at least three years. (Slodoban Lekic/Stars and Stripes) 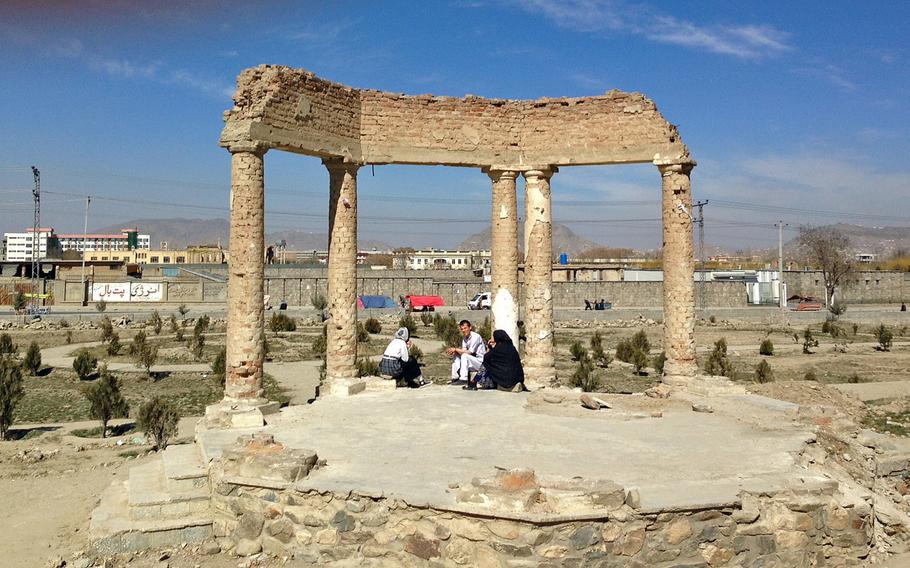 A family picnics beneath a destroyed gazebo in the gardens of Kabul's Darul Aman Palace, now in ruins, on Sunday, Feb. 28, 2016. The grounds of the palace, located on Kabul's western outskirts, are a popular weekend place for residents of the Afghan capital. Renovation work on the palace has recently started. (Slobodan Lekic/Stars and Stripes)

KABUL, Afghanistan — The bombed-out ruins of the once-grand Darul Aman Palace at the edge of Kabul have long symbolized the suffering caused by Afghanistan’s history of near-constant war.

But now the desolate hilltop complex — which has served as a bizarre tourist attraction for the legions of soldiers, diplomats and other visitors to the Afghan capital over the past 15 years — is due for a long-awaited renovation.

“We are now building a wall around the complex to keep people out,” said Zabihullah, foreman of the group of masons setting up a construction site near the entrance.

“This is just to keep looters out of the area so that the real work can start,” said Zabihullah, who like many Afghans uses only one name.

Officials said that a campaign initiated in 2012 to raise donations from the public, including schoolchildren and government employees, had brought in the necessary funds to start initial construction work on the building, which is still a source of national pride, though more funds are needed.

The neoclassical palace, originally intended to house the national parliament, was built by German architects and engineers in the 1920s for Afghanistan’s reformist King Amanullah, who sought to modernize the impoverished, landlocked country. The palace still symbolizes subsequent failed attempts at reform.

“For Afghans, the Darul Aman Palace has always symbolized the unfinished project of which it was both the most visible and smallest part,” wrote future President Ashraf Ghani and his artist daughter, Mariam, in their 2012 article “Afghanistan: A Lexicon.” The essay, written for an annual exhibition in Germany, looked at the fate of past efforts to reform Afghanistan.

Before he was deposed and exiled by religious fundamentalists, Amanullah named the ornate palace Darul Aman, which means “Abode of Peace” in Arabic.

Its history has been anything but peaceful.

The building, which never served its intended purpose but instead housed various government offices and ministries, burned in an electrical fire in 1968 and was burned down again in 1979, when Soviet special operators set it ablaze while advancing on the nearby Tajbeg presidential palace, where they assassinated then-President Hafizullah Amin.

It was reconstructed both times. Throughout the 1980s, it served as the Defense Ministry for the pro-Soviet regime.

In 1990, rival mujahedeen warlords fighting for control of Kabul finally destroyed it by artillery and rocket fire, leaving it an empty shell before they were ousted from Kabul by the Taliban Islamist movement.

After the Taliban were themselves chased out of Kabul in 2001 by a coalition of U.S.-backed rebels — including some of those who had commanded the forces that ravaged the palace during the civil war of the 1990s — the new government announced plans to reconstruct Darul Aman and return it to its original purpose as the national parliament.

But those plans were temporarily set aside when India granted financing for the construction of a new parliament building located just a few hundred meters from Darul Aman.

Yasin Niazi, who heads Kabul municipality’s construction agency, said the new plan was to start slowly by building the surrounding wall and restoring the infrastructure — including access roads and utilities — before tackling the main reconstruction work.

“Its an important historical building; it needs to be preserved,” Niazi said.

He said the government still has to budget the $16 million needed for the major works, which will start in 2017.

“Refurbishment will be done as per the palace’s original architectural plans. So it will be exactly the same as when it was built,” Niazi said. “We are even using the same stone and from the same quarry.”

Walid Abu Fajar, head of the local construction company that won the tender for the project, said the reconstruction is scheduled to last three years.

It’s hoped that the Indian government will cover some of the costs, just as it provided funding for the gleaming new parliament building, Abu Fajar said.

Kabul residents said the project should have started earlier in view of the palace’s symbolic value.

“It’s important to preserve the past. Every time I drive by it I’m happy it’s still there,” she said. “I like showing it to my daughter, telling her that it went through the war together with my generation.”