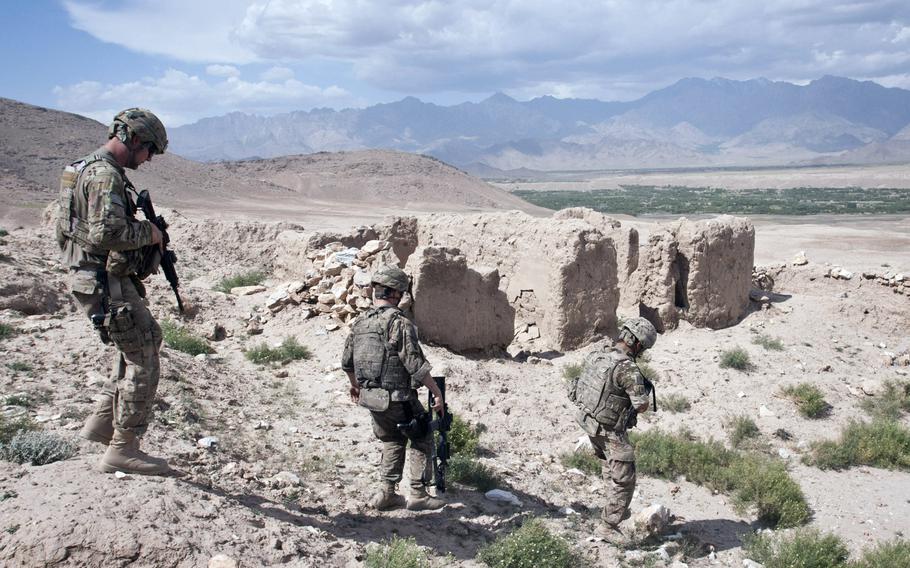 Airmen with the 455th Air Expeditionary Wing, Task Force Reaper, descend a hillside past an old earth building near Bagram Airfield in 2012. Media reports indicate President Donald Trump will reduce the number of U.S. forces in Afghanistan to 2,500 by mid-January. (Ken Scar/U.S. Army)

Airmen with the 455th Air Expeditionary Wing, Task Force Reaper, descend a hillside past an old earth building near Bagram Airfield in 2012. Media reports indicate President Donald Trump will reduce the number of U.S. forces in Afghanistan to 2,500 by mid-January. (Ken Scar/U.S. Army) KABUL, Afghanistan — Reports this week of potential U.S. troop cuts met with warnings from Afghanistan security officials that a rapid drawdown would embolden terrorists and hamper Afghan military efforts to fight its enemies.

President Donald Trump is preparing to reduce the U.S.’s footprint in Afghanistan to 2,500 troops and draw down to the same number in Iraq by Jan. 15, just five days before his presidency is expected to end, The Associated Press and other news outlets reported Monday.

The possible move falls short of a goal he touted throughout his tenure to end the country’s “forever wars,” but defies the advice of generals and others who have advocated for larger footprints as peace talks between Kabul and the Taliban continue.

“To release thousands of terrorists, get nothing in return, and then withdraw, is a failed strategy for war and peace,” Javid Faisal, a spokesman for Afghanistan’s National Security Council, said Monday on Twitter. “Such policy blunders don’t mitigate the risks and embolden the threat of global terrorist networks to our region and the world.”

Faisal referred to the release of about 5,000 Taliban prisoners, which the Afghan government reluctantly agreed to under the assumption that the U.S. would continue to provide military support until conditions were right for a withdrawal.

The 2,500 figure was first mentioned in October by national security adviser Robert O’Brien, who expected it to be reached early next year.

However, that assessment was dismissed as speculation by Chairman of the Joint Chiefs of Staff Gen. Mark Milley, who told NPR on Oct. 11 that any drawdown below 4,500 troops would be “conditions-based” to safeguard U.S. national security interests.

The U.S. military in Afghanistan on Tuesday would not answer questions as to whether conditions on the ground are now appropriate for a drawdown below 4,500, and referred all queries to the Pentagon, which did not immediately reply to Stars and Stripes.

The reports deepened concerns among some in Afghanistan’s security forces about the continued development of their capabilities.

Ishaqzai said he was particularly concerned about how they would be able to maintain the fleet of American aircraft the U.S. spent billions on without further training.

“I think our American colleagues should look at the situation in the country and be very careful about withdrawing,” Ishaqzai said.

Capt. Ghulam Rahman, who has served in the Afghan army for several years and is currently stationed in eastern Laghman province, was more optimistic about the nation’s self-sufficiency.

“We are well-trained and capable of defending our country,” Rahman said. “We will do that until we die.”

A further drawdown will likely be welcomed by the Taliban, who reacted favorably to a Trump tweet in October that said all U.S. troops should be out of Afghanistan by Christmas.

The insurgent group, which began talks with the government and other Afghan representatives in September, said such a move would be a positive step toward peace.

Under February’s U.S.-Taliban deal, the U.S. agreed to fully withdraw from Afghanistan along with all other international forces by May if the Taliban met certain conditions, one of which was severing ties with al-Qaida.

However, the Taliban maintains links with the terrorist group, according to recent assessments by the United Nations and the Pentagon.

NATO will continue its train, advise and assist missions, “even with further U.S. reductions,” Secretary General Jens Stoltenberg said in a statement Tuesday, warning that withdrawing haphazardly and too soon could come with a heavy price.

“We went into Afghanistan together. And when the time is right, we should leave together in a coordinated and orderly way,” Stoltenberg said.

In the U.S., Republican Senate Majority Leader Mitch McConnell praised the administration for fighting terrorism but warned against a premature exit from Afghanistan.

“It would be reminiscent of the humiliating American departure from Saigon in 1975,” McConnell said on the Senate floor Monday. “We’d be abandoning our partners in Afghanistan.”