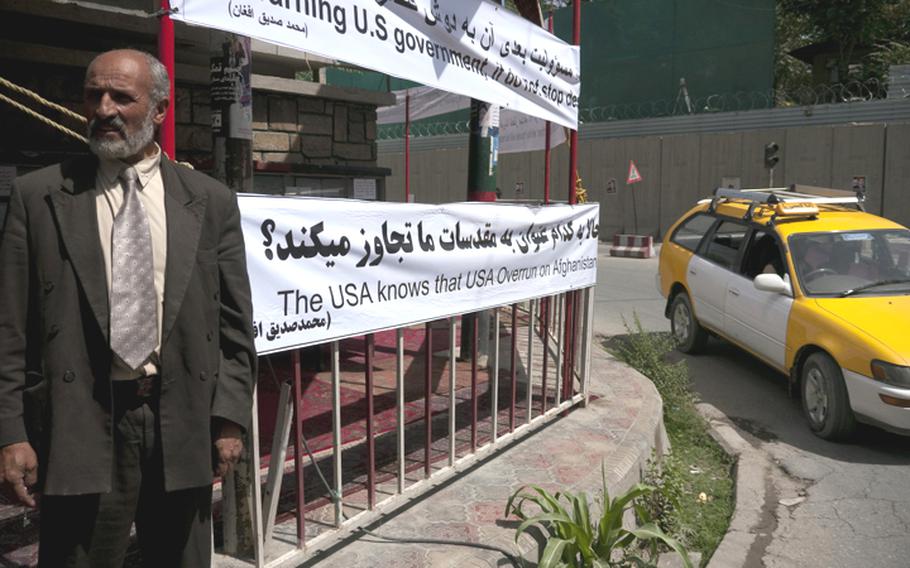 Buy Photo
Across the street from a complex of U.S. and NATO bases in central Kabul, Mathematician Ghulam Farouk Hamkar stands next to a banner decrying plans by a small Florida church to burn copies of the Koran on the anniversary of Sept. 11. The plans have sparked widespread outrage among Afghans. The banner, somewhat imperfectly translated into English, reads in part: "I warning U.S. government, if do not stop desecrate to Islam profanity in their country, for further white house will be responsible." (Michael Gisick/Stars and Stripes)

KABUL, Afghanistan &mdash; Gen. David Petraeus on Wednesday ratcheted up his condemnation of plans by a small Florida church to mark the anniversary of the Sept. 11 terrorist attacks by burning copies of the Quran, likening the popular outrage that would follow in Afghanistan to the reaction in Iraq to photographs of detainee abuses.

&ldquo;I think the images of such an action would be as indelible and inflammatory as have been the images of Abu Ghraib,&rdquo; he said. &ldquo;This will put our troopers and civilians in greater danger, and it&rsquo;s somewhat inexplicable to me that fellow citizens would do that.&rdquo;

Despite intense criticism from the military, the White House and a broad range of U.S. and international religious leaders, the pastor of the 50-member Dove World Outreach Center in Gainesville, Fla., reaffirmed on Wednesday his plans to go ahead with the Quran burning, scheduled for Saturday. An associate pastor at the church rejected claims that the plans would put U.S. troops in harm&rsquo;s way, according to reports.

Petraeus has criticized the plans several times in recent days, saying images of burning Qurans would serve as ready-made propaganda for the Taliban and undermine U.S. efforts in Afghanistan and across the Middle East.

But his comments during an interview Wednesday with Stars and Stripes were his strongest yet and represented a rare foray into domestic affairs for an acting military leader. By linking the plans with Abu Ghraib, widely seen as having entrenched popular opposition to the U.S. presence in Iraq and fueling the insurgency there, Petraeus made clear his belief that the actions of a church with a few dozen members could have critical and long-lasting implications for the war.

&ldquo;These images are nonbiodegradable in the age of the Internet,&rdquo; he said. &ldquo;They do not go away. So, I cannot understand the motivation for an action like this.&rdquo;

Though he sought to frame his comments mainly in terms of the possible impact of the Quran burning on the war, he added: &ldquo;All religions have some form of what we Christians would call the Golden Rule, and this seems to me quite an egregious violation of that kind of thinking.&rdquo;

The plans have provoked a backlash in Afghanistan, with protesters burning American flags during a demonstration Monday. On Wednesday, a public holiday marking the death of the anti-Taliban leader Ahmad Shah Massoud, some Kabul residents in cars decorated with posters of the late Northern Alliance chief shouted anti-American slogans out their windows.

Just outside ISAF headquarters at the office of the World Philosophical Mathematics Research Center, scholars usually concerned with the pursuit of arcane formulas that attempt to explain and predict world events had turned their attention to more immediate affairs, erecting a banner saying the U.S. government would be blamed for the Quran-burning.

&ldquo;If this happens, there will not be any protests,&rdquo; said Ghulam Farouk Hamkar, a researcher at the center. &ldquo;There will be fire. The U.S. Embassy will be burned. People will attack American soldiers wherever they see them. Everyone will do this, not just insurgents.&rdquo;

At a nearby park, 60-year-old Habibullah Gul said news of the planned burning had cemented his disillusionment with the United States.

&ldquo;At first, they came to help us and kill the Taliban, and we were happy. Then they started to kill civilians. Now they are going to burn the Quran,&rdquo; he said. &ldquo;People said they were against Islam but I ignored them. Now I see that they are.&rdquo;

Like others, Gul rejected the suggestion that the plans represent the work of only a single tiny church outside the control of the U.S. government.

&ldquo;If the government wanted to stop it, they would stop it,&rdquo; he said. &ldquo;But they don&rsquo;t.&rdquo;

Ajmal Paktiawal, 28, said he would consider personally taking part in attacks on U.S. troops if the Quran-burning goes ahead.

&ldquo;Right now this is just a rumor and everyone is angry,&rdquo; he said. &ldquo;If it happens, there will be a huge, huge problem. Within 24 hours, everything will be burned. Like every Muslim, I would love to be killed for my religion.&rdquo;