Pentagon: US military attempted rescue of professors kidnapped in Kabul 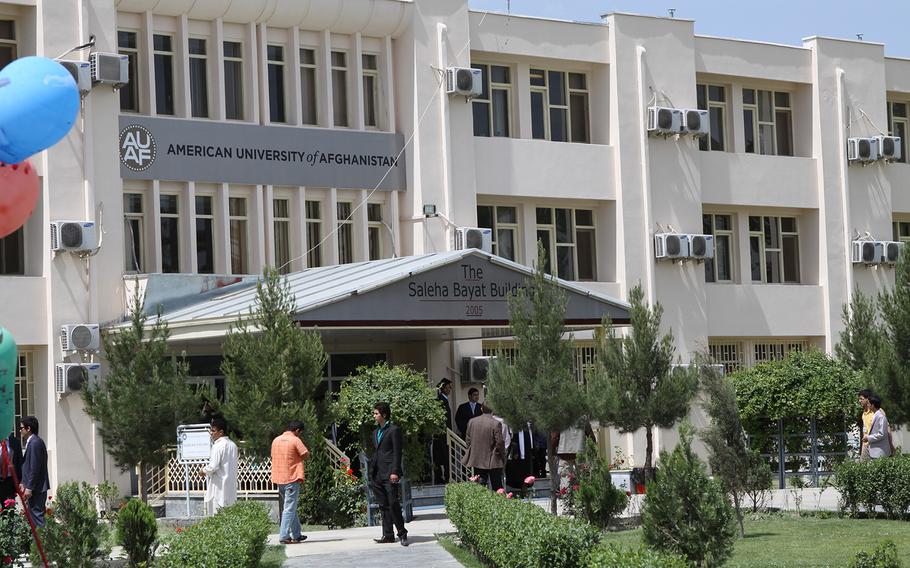 An entrance to the American University of Afghanistan in Kabul is seen in May 2011. During a raid in August, a team of Navy SEALs unsuccessfully attempted to rescue two professors kidnapped near the university on Aug. 7, 2016. (WikiMedia Commons)

WASHINGTON — Navy SEALs killed more than a handful of Taliban-linked militants during a secret raid in Afghanistan last month, but they were unable to rescue the captives they sought to save, according to Pentagon officials.

The elite special operators killed seven insurgents during a fierce firefight as they assaulted a compound where U.S. officials believed Haqqani network militants were holding two English professors who had been kidnapped near the American University of Afghanistan in Kabul, according to defense officials who spoke on the condition of anonymity.

The SEALs did not find American Kevin King and Australian Timothy Weeks during the nighttime raid. It is not clear whether they were moved or they were never there, one official said.

No Americans were injured during the operation.

Pentagon Press Secretary Peter Cook confirmed Thursday that President Barack Obama had approved a mission at Defense Secretary Ash Carter’s recommendation to recover hostages, but he did not provide details about the mission, citing operational security concerns for the troops and the safety of the hostages.

He and the officials declined to say when or where the operation took place.

King and Weeks were forced from their sport utility vehicle and kidnapped by gunmen just outside the university’s fortified campus in Afghanistan’s capital on Aug. 7. Their whereabouts have remained a mystery, but American officials believe they were captured by the Haqqani network.

The hardline Taliban faction operates along the Afghanistan-Pakistan border and is considered a terrorist organization by the United States. The Haqqani network has taken western hostages in the past, including Army Sgt. Bowe Bergdahl.

The group held the soldier in Pakistan for five years before releasing him to U.S. special operators in May 2014 in a controversial exchanged for five senior Taliban leaders who had been held at the detention facility at Guantanamo Bay in Cuba.

An official said Friday that there was some concern the professors’ captors would attempt to move them into Pakistan. Cook suggested Thursday that the military would continue its search.

The raid was the second attempt to rescue the professors, according to the Washington Post.

One night before the unsuccessful assault, the SEALs boarded aircraft and flew toward the location where they believed the captives were being held. The mission was called off while they were in the air because its details did not reach White House officials in time to be approved by Obama, the newspaper reported, citing anonymous sources.

Such highly classified hostage rescue operations require presidential approval and are typically conducted by the most elite American troops. In February, Navy Senior Chief Edward Byers, a member of SEAL Team 6, received the Medal of Honor for his role in a succesful hostage rescue in Afghanistan in 2012.

In the weeks after the professors were captured, militants again targeted the American University of Afghanistan. On Aug. 25, an assault on the campus that lasted hours left at least 13 people dead and more than 30 others wounded. The Taliban is also suspected in that assault.

American University is a private, independent school opened in 2006 with about 1,300 students. It offers undergraduate and graduate degrees with courses taught in English, often by visiting professors from the United States or other Western countries. It is funded by the U.S. Agency for International Development, the State Department, the World Bank, the Afghan government and a number of private donors.