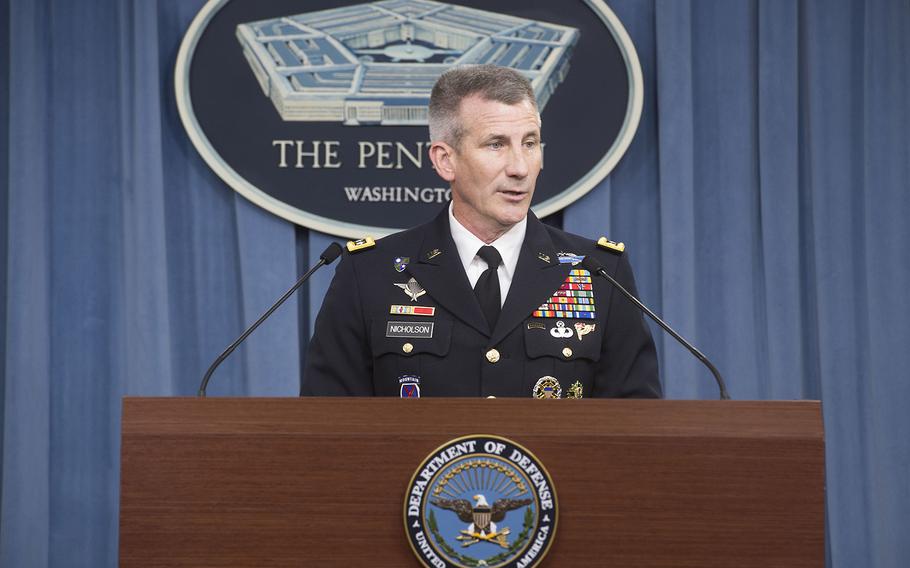 WASHINGTON – The top 12 leaders of the Islamic State group in Afghanistan have been killed this summer during an American-backed Afghan special operations offensive in the country’s eastern region, the top American commander for Afghanistan said.

Yet, the Afghan security forces remained in a stalemate with Taliban forces throughout much of the nation and have sustained high casualties as the fighting season nears its expected end, Army Gen. John “Mick” Nicholson said Friday at the Pentagon.

Still, he said, there are positive signs.

“I am concerned by the high casualties, but thus far, despite the high casualties the Afghan security forces were able to prevent the enemy from accomplishing their goals in 2016,” said the general who took command of U.S. and NATO operations in Afghanistan about seven months ago. “We also see a resilience that the Afghan security forces have been able to continue to fight in spite of these losses.”

Nicholson said the Afghan security forces have proved their mettle this year through a three-part operation that successfully fended off Taliban advances on city centers in Kunduz, Helmand and Uruzgan provinces before turning toward an offensive assault on the Islamic State group in Nangarhar Province.

The Afghan special forces assault on the Islamic State group in that eastern Afghanistan province has left the group – known as Islamic State Khorasan Province – confined to three or four remote villages deep in the southern Nangarhar mountains, Nicholson said.

While the group retains some financial ties to the Islamic State group’s parent organization in Syria and Iraq, it wields only limited influence in Afghanistan, the general said.

The United States killed the group’s top leader, Hafiz Sayed Khan, in a July 26 airstrike at the height of the Afghan offensive against the Islamic State group. Nicholson did not provide details about the deaths of the other 11 leaders from the group.

The Islamic State group, which once boasted more than 3,000 fighters in Nangarhar, has only about 1,200 to 1,500 left, losing about 25 percent of its force to casualty or desertion since the Afghan offensive began in July. Those operations targeting the Islamic State group will continue into next year, Nicholson said.

The Afghan security forces control about 70 percent of the country, Nicholson said, confirming the evaluation Marine Gen. Joseph Dunford, the chairman of the Joint Chiefs of Staff, provided the Senate Armed Services Committee on Thursday. Nicholson agreed with Dunford’s characterization of the fight as a stalemate, but he insisted that was not necessarily a negative outcome for the fighting season.

The Taliban, and to lesser extents other organizations such as the Islamic State group, only control about 10 percent of the country, primarily in rural areas, Nicholson said. The remaining 20 percent remains contested.

“Another way to look at stalemate is that you’ve reached some sort of equilibrium,” Nicholson said Friday. “…This is a positive in the sense that the majority of the population is in the control of the government forces, primarily the population centers.”

He said the United States will ramp up its train and assist mission during the final months of 2016 in an effort to help the Afghan forces “regroup and reset” for the 2017 fighting season, when Afghans will work to “gradually increase control” of the contested portions of the country.

Much of that training will focus on improving low-level leadership skills, supply systems and the dependence on checkpoints, Nicholson said. He blamed the checkpoint system for many of the Afghan security forces casualties, especially the national police.

“I think we have a good plan in place for the Afghans to address the casualty issue going forward.”

There are about 9,800 American troops in Afghanistan, but that number will fall to 8,400 by January. Nicholson said he was confident that was the proper number of Americans to help the Afghans continue to improve while also targeting terrorist organizations including the Islamic State group and al-Qaida.