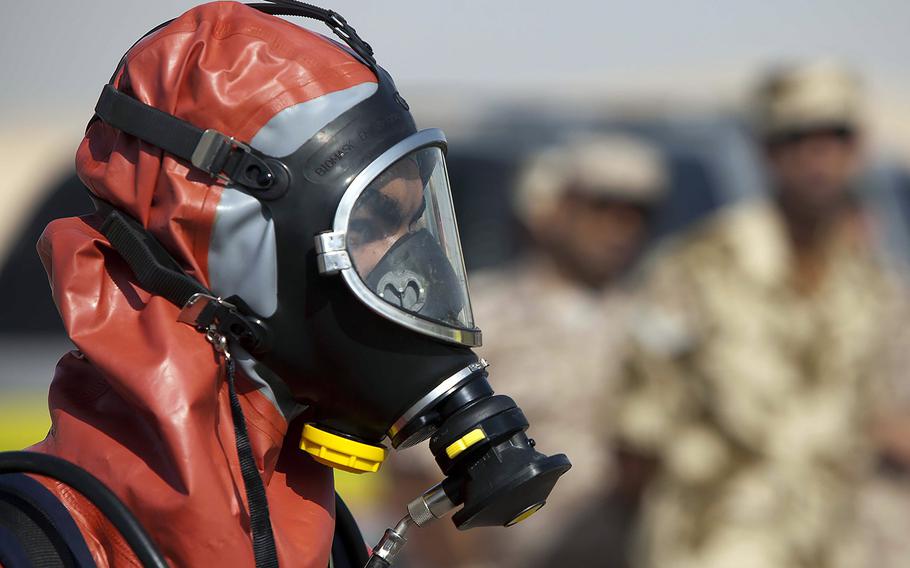 A member of the Bahrain Defense Force showcases a protective chemical and biological protective suit during an exercise in the United Arab Emirates on January 28, 2013. Pentagon officials said Friday, Aug. 21, 2015, that traces of mustard gas were found on mortar fragments used by Islamic State militants in an attack against Kurds in Iraq on Aug. 11. (Leon M. Branchaud/U.S. Marine Corps)

Initial tests on mortar fragments from an Aug. 11 Islamic State attack against Kurdish forces in Iraq have tested positive for the chemical weapon mustard gas, the Pentagon said Friday.

A few days after the attack near Makhmour, the Kurdish peshmerga forces brought fragments from the mortar rounds to U.S. forces. Makhmour is just south of Irbil, where the U.S. has one of its training center sites.

“We were able to take the fragments and do a field test on those fragments, and they showed the presence of HD, or what is known as sulfur mustard. That is a class one chemical agent,” said Marine Corps Brig. Gen. Kevin J. Killea, chief of staff, Combined Joint Task Force-Operation Inherent Resolve.

Sulfur mustard, commonly known as mustard gas, is a chemical warfare agent that can form large blisters on exposed skin and in the lungs.

The initial tests have to be backed up by full testing, and that could show, among other things, whether the fragments were part of munitions that contained the chemical weapon and were not tampered with. The more extensive tests could also show how much agent was used “and where it came from,” he said.

Remnants from a suspected chemical weapon attack in June in Syria have also undergone full testing, but Killea said he did not have the results of that investigation.

Regardless, he said, “we really don’t need another reason to hunt down [the Islamic State] and kill them wherever we can.”