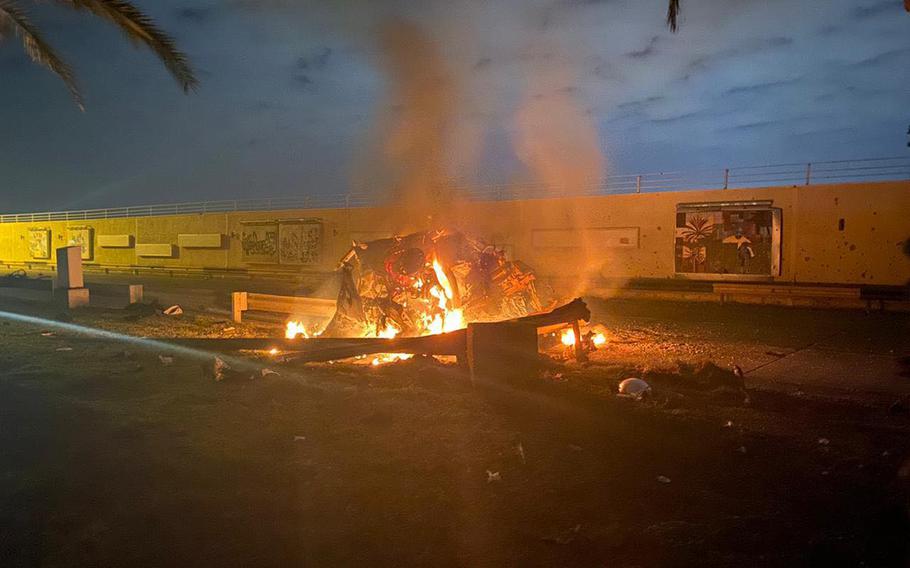 In this photo from social media, a burning car is shown after a rocket attack on the Baghdad International Airport on Jan. 3, 2020. (Iraq Ministry of Defence/Facebook)

“At the direction of the President, the U.S. military has taken decisive defensive action to protect U.S. personnel abroad by killing [Qassem] Soleimani,” the Pentagon said in a statement. “Soleimani was actively developing plans to attack American diplomats and service members in Iraq and throughout the region.”

Also reportedly killed was Abu Mahdi Muhandis, a senior leader of a paramilitary wing of Iraq’s security forces and founder of Kataeb Hezbollah, an Iran-backed Shiite militia group with a long history of fighting American forces in Iraq. The Pentagon blamed the group for a deadly strike in Kirkuk that killed a U.S. civilian contractor last week.

Defense Department officials accused Soleimani of orchestrating last week's Kirkuk attack, as well as many others in recent months that have killed and wounded both American and coalition service members.

Iran’s supreme leader Ayatollah Ali Khamenei declared three days of mourning for Soleimani’s death, stating “severe revenge awaits the criminals who bloodied their foul hands with his blood and other martyrs’ in last night’s incident,” according to news reports.

Powerful Iraqi Shiite cleric Muqtada al-Sadr issued a statement on Twitter giving orders to revive the anti-American Mahdi Army, which along with Kataeb Hezbollah had been a major destabilizing force targeting American and coalition troops after the 2003 invasion of Iraq. The group was dissolved more than a decade ago, but Sadr called on its fighters and others to “be ready.”

The attack reportedly happened at about 1 a.m. Social media users said they heard explosions, followed by sounds of military aircraft.

The strike was confirmed about 45 minutes later by the Iraqi government’s security information cell, which posted photos of burning vehicles near the airport on its Facebook page, attributing the damage to a rocket attack.

Seven people were killed in Friday's strike, an official with an Iran-backed paramilitary force told The Associated Press.

Early media reports said the attack was an airstrike that killed Mohammed Redha, a senior member of Iraq’s Popular Mobilization Units — an umbrella group of paramilitary forces that Muhandis was deputy commander of, and which included Kataeb Hezbollah and other Iran-backed militias, as well as other groups that have fought the Islamic State group since 2014.

Observers warned that Soleimani’s death could lead to dramatic escalation in the region, where tension between Washington and Tehran has been mounting for months.

“Soleimani had cult hero status within IRGC and among Shia militias in the region, and was personally the most popular regime figure in #Iran,” tweeted Vali R. Nasr, professor of Middle East Studies and International Affairs at Johns Hopkins University. “The pressure to retaliate will be immense.”

A State Department security alert Friday urged all Americans to leave Iraq immediately due to the “heightened tensions in Iraq and the region,” reiterating an advisory issued Wednesday after Iran-backed militias attacked the U.S. Embassy compound in Baghdad.

The militia members breached the embassy gates on New Year’s Eve, withdrawing from the area the next day after a contingent of about 100 Marines arrived from Kuwait to bolster the diplomatic compound’s security.

The attack on Soleimani came hours after Defense Secretary Mark Esper urged Iran and its proxies to stand down.

“We will not accept continued attacks against our personnel and forces,” he said in a statement Thursday. “Attacks against us will be met with responses in the time, manner, and place of our choosing.”

Sen. Chris Murphy, D-Conn., questioned the killing of Soleimani in a tweet before the Pentagon issued its statement confirming the general's death.

“Did America just assassinate, without any congressional authorization, the second most powerful person in Iran, knowingly setting off a potential massive regional war?” he wrote.

After rocket attacks on bases housing American troops in early December — some of the 11 carried out in the past two months that have mostly wounded Iraqis — U.S. officials called on the Iraqi government to do more to prevent them and warned of decisive action if they continued.

Then, last Friday, a barrage of rockets hit the K1 base in Kirkuk, killing an American civilian contractor and wounding four U.S. and two Iraqi service members. The Defense Department countered with airstrikes targeting five Kataeb Hezbollah sites in Iraq and Syria.

“General Soleimani also approved the attacks on the U.S. Embassy in Baghdad,” the Pentagon said in its statement confirming the attack that killed him. “This strike was aimed at deterring future Iranian attack plans.”

Iraqi Prime Minister Adil Abdul-Mahdi, whom Esper had warned of the strikes on Kataeb Hezbollah shortly before they were carried out, criticized the Pentagon’s strikes as a violation of the country’s sovereignty.

Mahdi, who is acting in a caretaker role after recently resigning his post, called for a review of Iraq’s relationship with the United States. Iran-backed militia groups also promised to press the Iraqi parliament to move to evict the U.S., which has been aiding Iraq in the fight against ISIS.

The U.S. has sent roughly 14,000 troops to the Middle East since last summer. In response to the embassy siege, Esper ordered some 750 infantry troops from the Army’s 82nd Airborne Division to deploy to the region.

The first wave of the troops from the 82nd Airborne’s 1st Brigade Combat Team departed Thursday. More would be on standby to deploy in the coming days, Esper said.

“The United States will continue to take all necessary action to protect our people and our interests wherever they are around the world,” the Pentagon said early Friday.