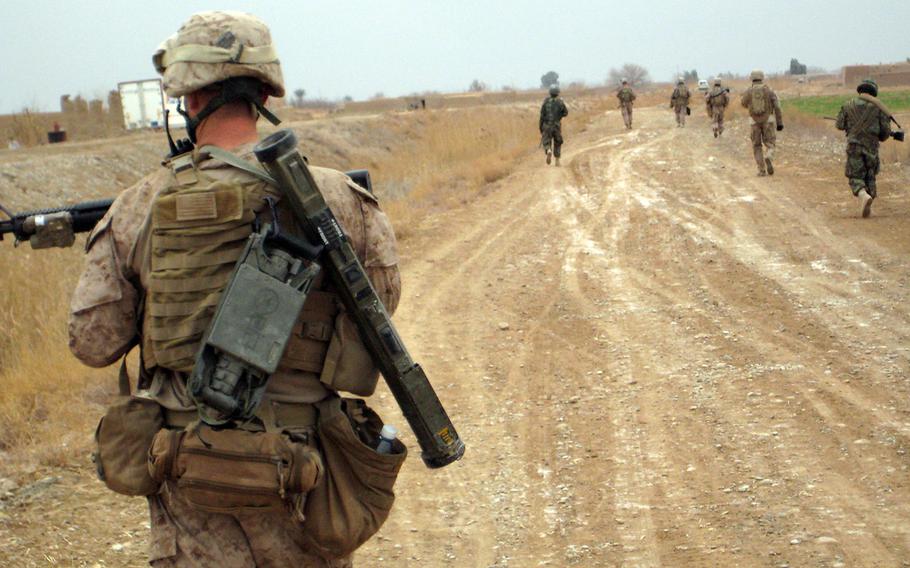 KABUL, Afghanistan — One U.S. servicemember was killed and two others injured, as American and Afghan troops came under rifle and mortar fire Tuesday in Helmand province, a military spokesman confirmed.

The servicemembers, along with their Afghan counterparts, came under fire during a train, advise and assist mission in the city of Marjah, said Peter Cook, press secretary for the Pentagon. Several Afghan soldiers also were injured in the attack.

Two HH-60 Pave Hawk medevac helicopters responded to assist the casualties. One was waved off and left the scene safely, Cook said. The second landed but its main rotor blade was damaged when the helicopter hit a wall, he said.

Cook said the firefight on the ground was not over as of late Tuesday in Afghanistan, making it more difficult to know the number of casualties or whether the Taliban were responsible for the damage to the second helicopter.

"There may still be Americans on the ground engaging with the enemy," he said. "This is a fluid situation."

Pentagon spokesman Capt. Jeff Davis said late Tuesday that the deceased servicemember and the wounded personnel had been removed from the compound, but that U.S. forces were still on scene to secure the helicopter.

One defense official said that the three casualties were the result of the firefight and not a result of the damaged medevac helicopter.

U.S. defense officials had previously said the second helicopter might have been damaged on the ground by mortar fire. The damaged helicopter was still not able to move as of late Tuesday.

The Defense Department did not immediately release the name of the soldier killed. The death, which happened near Marjah, marks the first U.S. servicemember killed in 2016. Six years ago, thousands of American troops battled to control the city.

U.S. special forces have been on the ground in Helmand province for weeks to aid beleaguered Afghan soldiers who are at risk of losing the province to the Taliban. Insurgents have taken over several districts and have made it to the outskirts of the provincial capital, Lashkar Gah.

An eyewitness to the fighting in Helmand reached by phone Tuesday said there were multiple operations ongoing with U.S. forces assisting Afghans in a bid to retake territory from the Taliban.

For the past year, the U.S.-led international military coalition in Afghanistan has called its mission “noncombat” and foreign casualties have dropped off significantly. Troops are still in harm’s way and more have been drawn back into fighting as their Afghan counterparts have struggled.

Six U.S. airmen were killed Dec. 21 north of Kabul when a suicide bomber drove his explosives-laden motorcycle into their foot patrol.