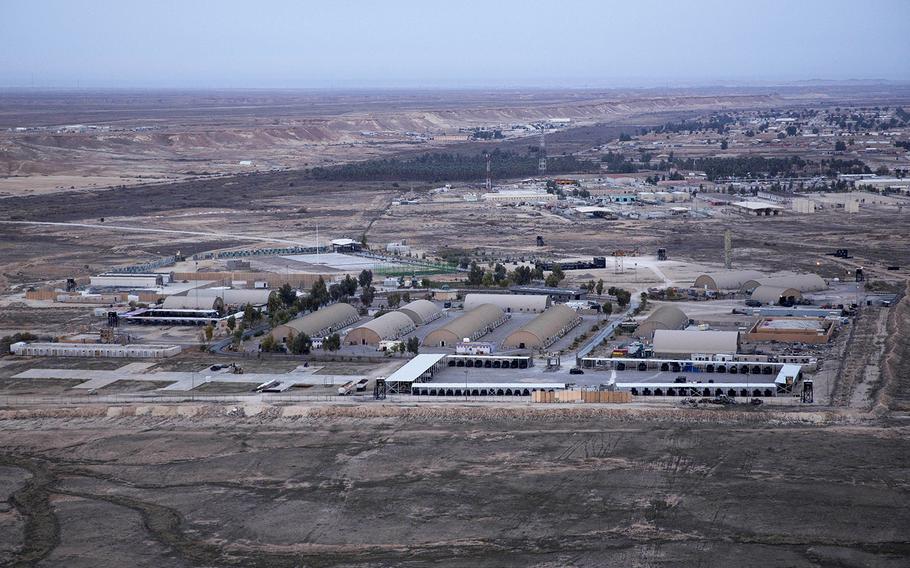 This Sunday, Dec. 29, 2019 file photo taken from a helicopter shows Ain al-Asad air base in the western Anbar desert of Iraq. (Nasser Nasser/AP)

WASHINGTON — The Pentagon said Friday that 34 U.S. service members suffered concussions from the Iranian missile attack Jan. 8 on al Asad Air Base in Iraq and it will review its injury reporting requirements amid the shifting narrative about casualties resulting from that strike.

Eight of the troops diagnosed with traumatic brain injury as a result of the attack have been transported to the United States where they will receive treatment as outpatients at either their home stations or at Walter Reed National Military Medical Center in Maryland, said Jonathan Hoffman, the Pentagon’s chief spokesman. Seventeen of the 34 have returned to duty at al Asad since their diagnoses, he said.

The Pentagon’s announcement Friday marked at least the third official adjustment to the number of troops injured when Iran launched 11 ballistic missiles into al Asad as retaliation for the U.S. drone strike Jan. 3 in Baghdad on Iran’s most powerful military official, Maj. Gen. Qassem Soleimani, the commander of its elite Quds Force. The base in western Iraq’s Anbar province hosts the largest American force in that country — some 1,500 U.S. and allied troops.

Initially, the Pentagon and President Donald Trump announced no Americans were injured or killed in the barrage. On Jan. 16, the Pentagon for the first time acknowledged publicly that service members had been injured, announcing 11 service members had been evacuated from Iraq for evaluation of suspected brain injuries. This week, officials at U.S. Central Command acknowledged additional troops had been evacuated from al Asad with concussion symptoms, but they declined to provide updated numbers or answer questions about those injuries.

Hoffman said Friday that 18 American troops were evacuated from Iraq with concussions or other TBIs. Of those troops, one has returned to duty in Iraq, nine remain at Landstuhl Regional Medical Center in Germany and the others arrived in the United States on Thursday. Hoffman said it was possible additional troops could be sent back to the United States and the number of concussion diagnoses could grow further. The remainder of the 34 service members diagnosed with TBI remained in Iraq throughout their recovery and have returned to work, he said.

The review of Defense Department injury reporting, which Hoffman announced Friday, will be led by Matt Donovan, the Pentagon’s acting personnel and readiness chief. He has been charged with working with the Joint Staff to determine whether the reporting requirements for injured service members should be updated, Hoffman said. The initial changes in reports of injured personnel at al Asad was at least partially attributed to policy that does not require TBIs and similar injuries to be reported to the Pentagon, which must be notified only of wounds that threaten the loss of limb, eyesight or life.

Hoffman said the review will be comprehensive and look at reporting requirements for all injuries, including TBIs. He said the results would be announced publicly in the future.

“The goal is to be as transparent, accurate and provide the American people and our service members with the best information about the tremendous sacrifice our warfighters make,” he said, adding later. “We need to have better clarity [on injuries]. We need to get a better handle on it.”

Nonetheless, Hoffman downplayed the apparent inconsistencies in injury reporting. He reiterated concussion and other TBI symptoms often develop over time following a head injury and news reporters were alerted that injuries had occurred within hours of Defense Secretary Mark Esper learning of them last week.

“This is a snapshot in time,” Hoffman said. “That’s what has been going on these last few days — we give you a snapshot in time of where were are right now. And so, we want to continue to provide … updates. But I think that right now the numbers [of injuries] are what they are.”

Earlier this week, President Donald Trump faced criticism when he downplayed the troops’ injuries while speaking at a news conference in Davos, Switzerland on Wednesday.

“I heard they had headaches and a couple of other things. I can report it is not very serious,” Trump said.

In a statement released Friday, the Veterans of Foreign Wars called on Trump to apologize for his remarks.

“TBI is known to cause depression, memory loss, severe headaches, dizziness and fatigue — all injuries that come with both short- and long-term effects, said William “Doc” Schmitz, the VFW’s National Commander, in the statement. “The VFW expects an apology from the president to our service men and women for his misguided remarks. And, we ask that he and the White House join with us in our efforts to educate Americans of the dangers TBI has on these heroes as they protect our great nation in these trying times.”

It remained unclear as of Friday whether the Defense Department would award Purple Hearts to the service members diagnosed with TBI from the Iranian attack. The Purple Heart, an award to recognize wounds inflicted by an enemy combatant, is approved for troops who receive TBIs in enemy attacks that are diagnosed by military medical professionals and result in 48 hours or more of duty missed as a result of those injuries, according to awards records.

It also remained unclear to which military services and units the injured troops belong. Hoffman said the individual services would likely announce that in the future, but the Pentagon was concerned about medical privacy laws in releasing such information.