Obama will leave 8,400 troops in Afghanistan through end of his term 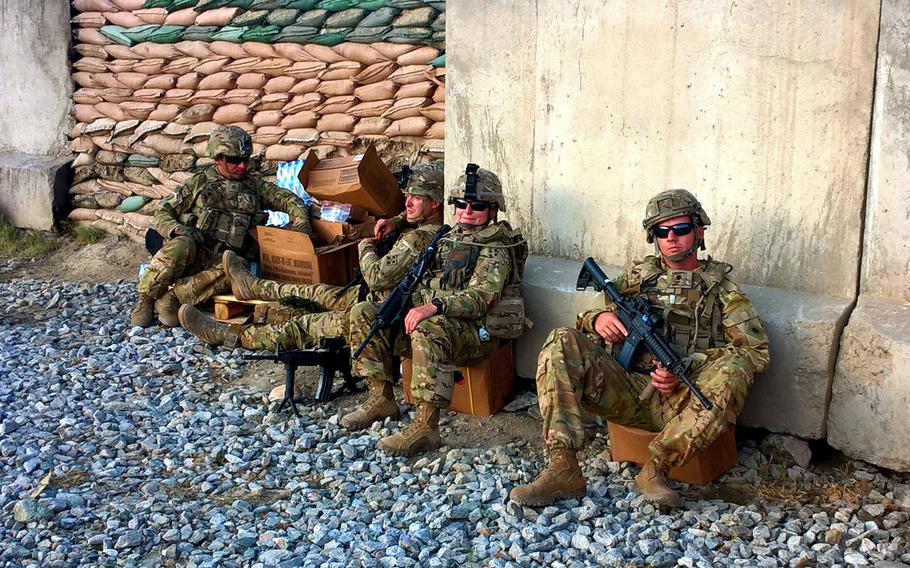 WASHINGTON — The United States will keep 8,400 troops in Afghanistan through the end of President Barack Obama’s term, thousands more than he had hoped to leave in the war-torn country.

The president said Wednesday that he would slow his planned drawdown of troops. In October, he announced he would leave 5,500 troops in Afghanistan at the end of his presidency. The decision leaves an important policy decision to Obama’s successor, who will take office Jan. 20. There are now 9,800 American servicemembers in Afghanistan.

“The decision I’m making today ensures that my successor has a solid foundation for progress in Afghanistan, as well as the flexibility to address the threat of terrorism as it evolves,” Obama said Wednesday at the White House, flanked by Defense Secretary Ash Carter and Marine Gen. Joseph Dunford, chairman of the Joint Chiefs of Staff.

It was the second time that Obama adjusted his plans to drawdown American troops in Afghanistan since the United States officially ended its combat role there at the end of 2014. Initially, the president announced he intended to leave only an embassy security force of about 1,000 troops in the country, where the United States has been at war since the end of 2001, shortly after al-Qaida terrorists attacked New York and Washington, D.C. on Sept. 11. 2001.

Carter said the troop-level adjustment “will enhance our ability to continue progress” on those missions, while ensuring Afghanistan is not used “as a safe haven for terrorists.”

But the Afghan security forces have not progressed as quickly as the United States had hoped. The government’s military and police forces still rely heavily on the U.S. and coalition forces for help with planning, intelligence, logistics and command and control. Last year, the Afghans suffered more casualties than ever in the long war and the Taliban was able to regain territory in some rural parts of the country, such as Helmand Province in the south and Kunduz Province in the north.

“I strongly believe it is in our national security interest, especially after all the blood and treasure we’ve invested in Afghanistan over the years, that we give our Afghan partners the very best opportunity to succeed,” Obama said.

Leaving the 8,400 American troops in the country, senior U.S. officials said Wednesday would allow the United States to continue to train the Afghans and target terrorist groups. The officials, who were familiar with the planning, were not authorized to speak publicly.

American servicemembers will continue to operate primarily from several U.S. bases, including Bagram, north of the capital of Kabul; in Kandahar, in the country’s south, and in Jalalabad, in the country’s east. In recent months, several hundred American soldiers were deployed to Helmand Province, where they continue to train Afghan soldiers. Some special operations forces are authorized to accompany Afghan commandos on missions.

While the White House does not consider the American roles combat missions, Obama acknowledged American troops in Afghanistan remain at risk. There have been 38 Americans, military and civilians, killed in the country since January 2015.

“Even as we’ve maintained a relentless case against those who are threatening us, we are no longer engaged in a major ground war in Afghanistan,” Obama said. “But even those narrow missions continue to be dangerous.”

Obama has been urged recently by retired military leaders, ambassadors and powerful lawmakers to freeze the troop level in Afghanistan at 9,800.

“We believe strongly that we need 9,800 here and further reductions would then cause a replay of the Iraq nightmare that was caused when we totally withdrew from Iraq, which created al-Qaida, which then created [the Islamic State group],” said McCain, the chairman of the Senate Armed Services Committee.

On Wednesday, McCain said he “welcomed” Obama’s decision, but he questioned why the president wanted to remove any troops.

“While I believe conditions on the ground warranted retaining the current force level, the decision to retain 8,400 U.S. troops in Afghanistan into next year is certainly preferable to cutting those forces by nearly half,” the senator said in the prepared statement. “That said, when the president himself describes the security situation in Afghanistan as ‘precarious,’ it is difficult to discern any strategic rationale for withdrawing 1,400 U.S. troops by the end of the year.”

The senior U.S. officials said 8,400 troops would be sufficient and argued it was not an arbitrary number, but a “reflection of a lot of lessons learned.”

The announcement came one day before Obama leaves for Warsaw, Poland, where a two-day NATO Summit will be kick off Friday to discuss, among other issues, the organization’s future in Afghanistan.