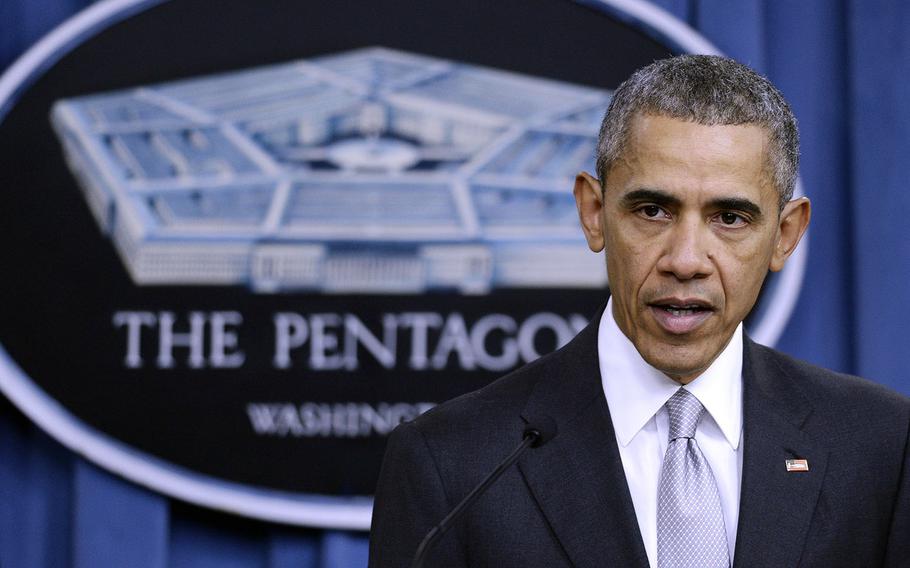 WASHINGTON — President Barack Obama on Monday touted the gains of an expanded air and ground campaign against Islamic State militants but said “progress needs to keep coming faster” after meeting with his National Security Council at the Pentagon.

“Since this summer, [the Islamic State group] has not had a single successful major offensive operation on the ground in either Syria or Iraq,” Obama said, speaking to reporters in the Pentagon briefing room. “So far [the Islamic State] has lost about 40 percent of the populated areas it once controlled in Iraq. And it will lose more.”

Obama’s visit comes weeks after he authorized sending up to 200 additional troops, including about 100 commandos, to Iraq to conduct raids, gather intelligence and capture key Islamic State operatives. There are already about 3,550 U.S. forces in Iraq training Iraqi security forces in a role that the Pentagon has been careful to emphasize does not include combat.

However, the military suffered its first combat death since 2011 on Oct. 22 when Delta Force commando Master Sgt. Joshua Wheeler died in a prison raid that freed hostages held by Islamic State militants in Hawijah, Iraq.

“We are hitting [the Islamic State] harder than ever,” Obama said.

U.S. and coalition aircraft have dropped nearly 9,000 bombs on Islamic State militants since Operation Inherent Resolve began in August 2014, and “last month in November, we dropped more bombs on [Islamic State] targets than any other month since this campaign started,” the president said. “All this said, we recognize progress needs to keep coming faster.”

Obama noted Secretary of Defense Ash Carter will travel this week to the Middle East to continue to garner support for the counter-Islamic State campaign by U.S. allies in the region. Secretary of State John Kerry will travel to Russia on Tuesday to work on a solution to end the civil war in Syria.

In addition to more airstrikes, earlier this month the administration announced it would add the 200 special operators. The decision has been criticized as incremental and too little by key Senate Republicans, and has been questioned whether it is the latest step in a return of traditional forces there.

In early December, Carter announced the addition of the up to 200 “Expeditionary Targeting Forces” while testifying in Congress. Two days later, Iraqi Prime Minister Haider Abadi slammed the announcement.

“The Iraqi government is committed to not allowing the presence of any ground force on the land of Iraq, and did not ask any side whether regional or from the international coalition to send ground troops to Iraq,” Abadi said in an official release Dec 4.

On Friday, British Defense Minister Michael Fallon said the U.K. would not be sending ground forces into Iraq. Over the weekend, German Chancellor Angela Merkel said Germany would not increase its contributions to the fight against the Islamic State group, and would not conduct airstrikes in Syria, according to reports. Fallon reiterated Friday that Abadi made it clear to him that the Iraqi government does not want to see British and American troops there.

Obama last visited the Pentagon in July, just after he had approved sending an additional 450 troops to Iraq to help Iraqi security forces regroup after they lost Ramadi to the Islamic State. With training and support from U.S. and coalition airstrikes, Iraqi forces have slowly closed in on Ramadi, taking back a key operations center and bridge from the Islamic State in the last two weeks.

However, the advances in Iraq have been offset by repeat setbacks in U.S. efforts to train local Syrian moderates to fight the Islamic State in Syria. In addition, U.S. and coalition airstrikes against Islamic State-held areas in Syria have been complicated by Russia’s entry into the air campaign there.

U.S. and French forces amplified their airstrikes against the Islamic State in Syria following an intricate set of terror attacks in Paris on Nov. 13, and Obama pledged further pressure on the terror group after a deadly Dec. 2 attack on a holiday party in San Bernadino, Calif., that killed 14.