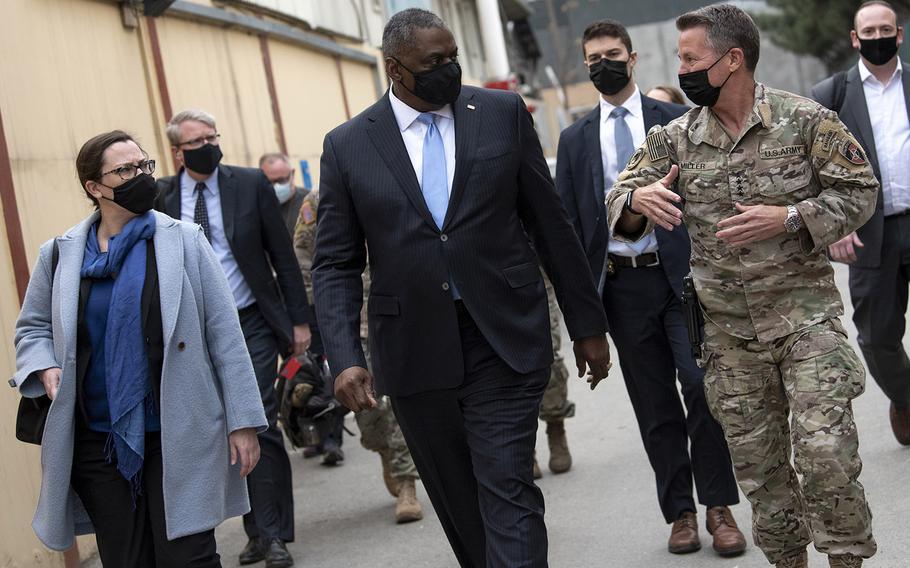 WASHINGTON — More American troops could deploy to Afghanistan in the coming months to help with U.S. withdrawal efforts from the country, Pentagon’s chief spokesman said Friday.

“It is not out of the realm of the possible that for a short period of time, there will have to be some additional enabling capabilities added to Afghanistan to help effect a safe, orderly and deliberately planned drawdown of everybody by the president's deadline by early September,” John Kirby said during a news briefing.

President Joe Biden on Wednesday announced he had decided to withdraw the 2,500 or so U.S. troops in Afghanistan by Sept. 11, the 20th anniversary of the terrorist attacks that led to the invasion of the country. The withdrawal was originally supposed to happen by May 1 as laid out in peace agreement with the Taliban, but Biden had previously said meeting that deadline would difficult.

Preliminary plans had already been written for the May withdrawal, Kirby said. Those plans will now need to be updated and could possibly include logisticians and engineers as the U.S. needed when leaving Iraq in 2011, and security forces to protect withdrawing troops, he said.

“We've seen [the Taliban] threats, and it would be imprudent for us not to take those threats seriously. It would also be imprudent for the Taliban to not take seriously what the president and what [Defense] Secretary [Lloyd] Austin both made clear, that any attack on our draw down, on our forces, or our allies and partners as they draw down, will be met very forcefully,” Kirby said.

He also said the Pentagon will be limited in how transparent it will be about day-to-day details regarding the drawdown due to the Taliban threats.

Whether some Defense Department-funded contractors will remain in the country after the drawdown to help Afghan forces is still being determined, according to Kirby. With the end of the military mission in Afghanistan, the United States support to Afghan forces will mostly be financial, he said.