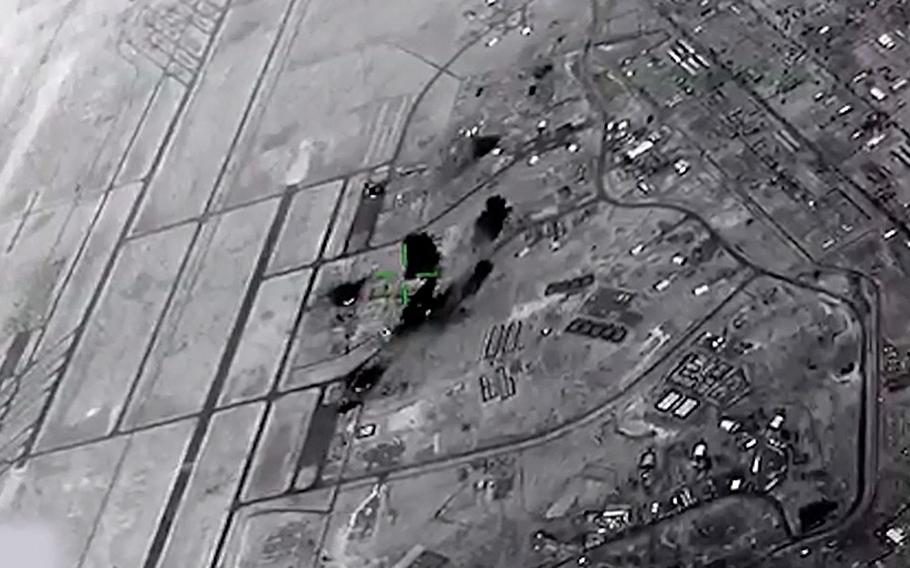 Smoke rises following an Iranian ballistic missile strike on al Asad Air Base, Iraq, Jan. 8, 2020, in a screenshot from a video released recently by the U.S. military. (U.S. Central Command)

Flames rolled over bunkers where American troops took cover on an Iraqi air base 13 months ago, as Iranian missiles carrying 1,000-pound warheads rained down upon them.

“We’re going to burn to death,” Army Maj. Alan Johnson said, recalling the sudden attack on al Asad Air Base in Anbar province, in an interview with CBS’s 60 Minutes that aired Sunday.

Johnson and five others dashed to a further bunker as another missile was incoming, which sounded “like a freight train going by you.” Of nearly two-dozen theater ballistic missiles fired at two bases in the early hours of Jan. 8, 2020, nearly a dozen struck al Asad and at least one hit an air base in Irbil housing U.S. forces.

U.S. Central Command released two minutes of unclassified drone footage Monday that it had provided to the news program showing the attack at al Asad. Tehran launched the barrage in retaliation for a U.S. drone strike days earlier in Baghdad that killed Iran’s Maj. Gen. Qassem Soleimani, head of its elite Quds Force.

It was the largest ballistic missile attack ever against Americans, 60 Minutes’ David Martin reported, and it brought the U.S. perilously close to war with Iran.

CENTCOM boss Gen. Frank McKenzie told Martin the strike could have killed up to 150 Americans and destroyed 30 aircraft if the U.S.-led coalition hadn’t taken measures to move people out of harm’s way ahead of time.

“Had Americans been killed it would have been very different,” McKenzie said. “We had a plan to retaliate if Americans died.”

The U.S. had indications of an impending attack, including knowledge that Iran had purchased commercial satellite imagery of the base, and relocated many of the nearly 2,000 troops at al Asad to other bases or into the nearby desert. CBS also aired footage of the strike taken by soldiers in tactical vehicles positioned off base.

Though the attack shed no American blood, it left more than 110 personnel with traumatic brain injuries, including Johnson, who was one of 28 awarded Purple Heart medals.

“The only thing I can actually come up with is that the hand of God protected us,” Johnson said. “Because really nobody should have lived through this.”