Near daily patrols continue for Marines at Bagram 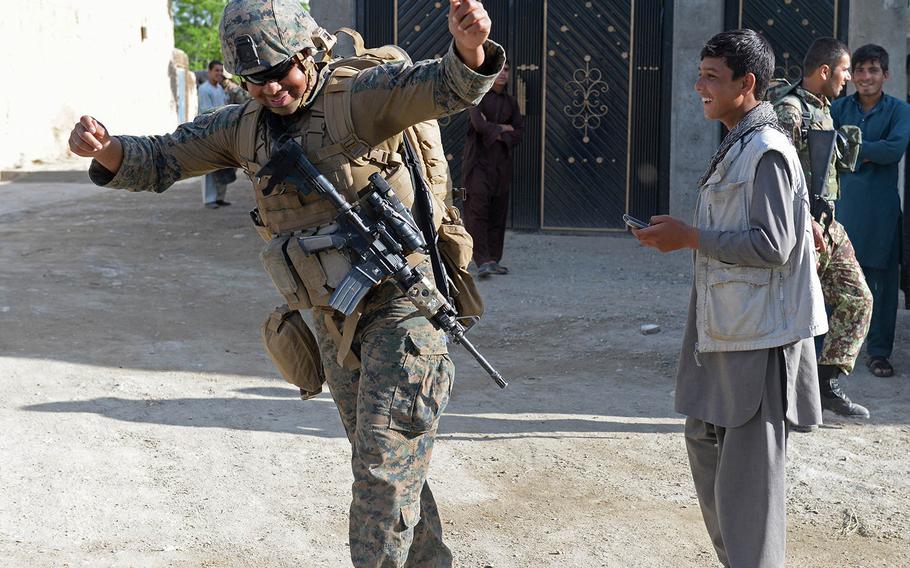 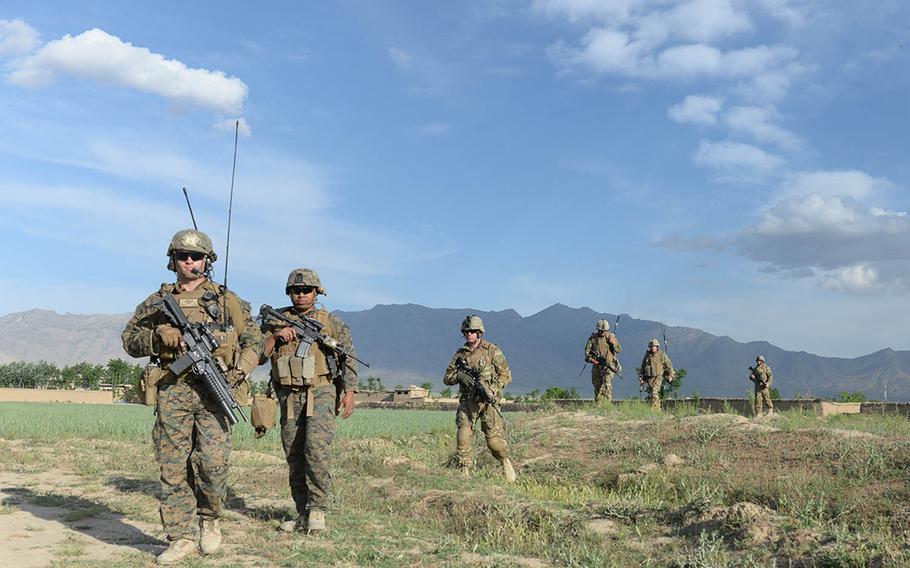 U.S. Marines and Georgian soldiers patrol near Bagram Airfield, May 9, 2015. The near daily patrols are designed to stem rocket and IED attacks against and around the logistics hub. (Jad Sleiman/Stars and Stripes) 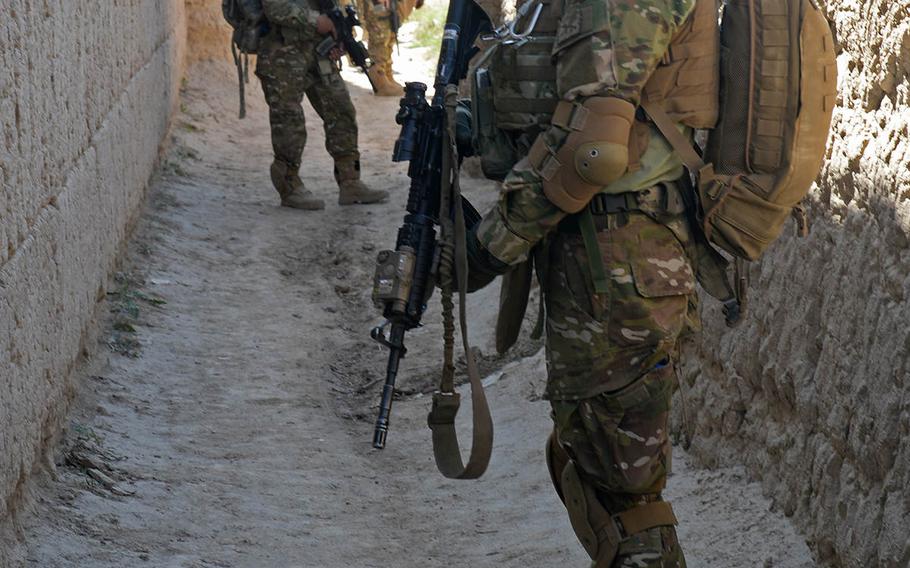 Georgian soldiers with the 43rd Georgian Infantry Battalion patrol near Bagram Airfield May 9, 2015. Georgians make up the second largest contributing force to the NATO-led Resolute Support mission in Afghanistan. (Jad Sleiman/Stars and Stripes) 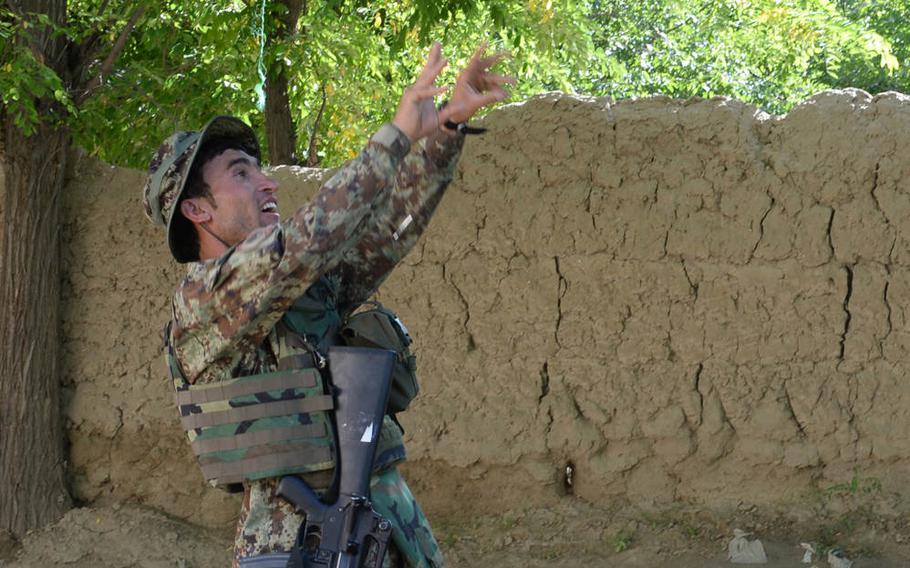 An Afghan soldier plays volleyball with villagers while on patrol near Bagram Airfield May 9, 2015. Bagram, a longtime logistics hub, is unique among major coalition bases in that it is far from a major Afghan National Army post. (Jad Sleiman/Stars and Stripes) 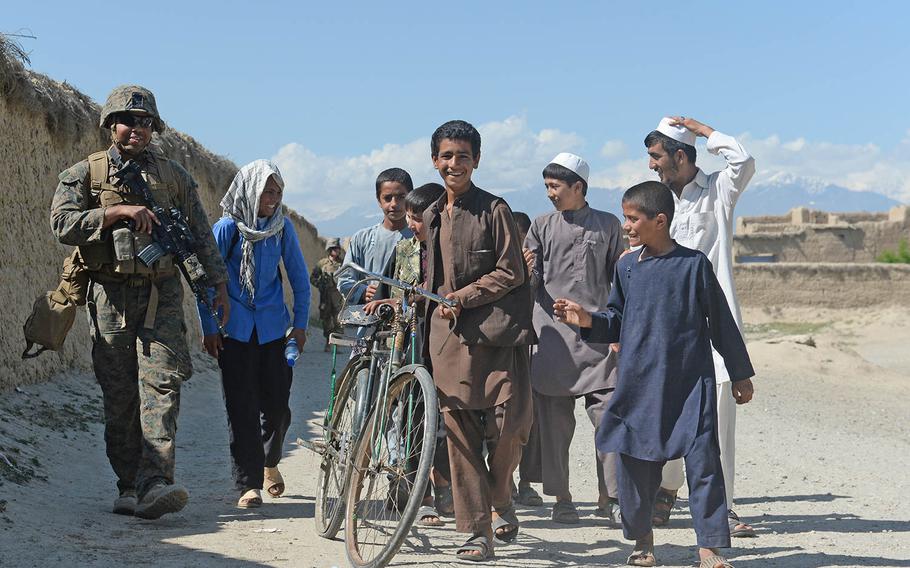 Petty Officer 2nd Class Christopher Johnson, a corpsman, attracts an entourage while on patrol near Bagram Airfield May 9, 2015. About 50 Marines work with Georgian Army partners to secure Bagram Airfield, north of Kabul. (Jad Sleiman/Stars and Stripes) 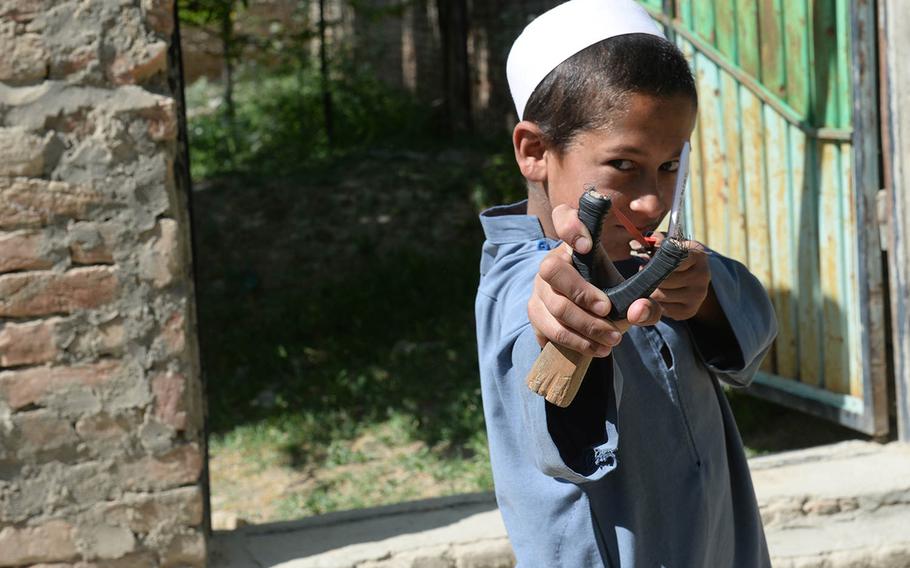 An Afghan child shows off his sling shot near Bagram Air Field May 9, 2015. The troops who patrol this Afghan village expect rocks to hit their vehicles, but say it's just a game the kids play. (Jad Sleiman/Stars and Stripes) 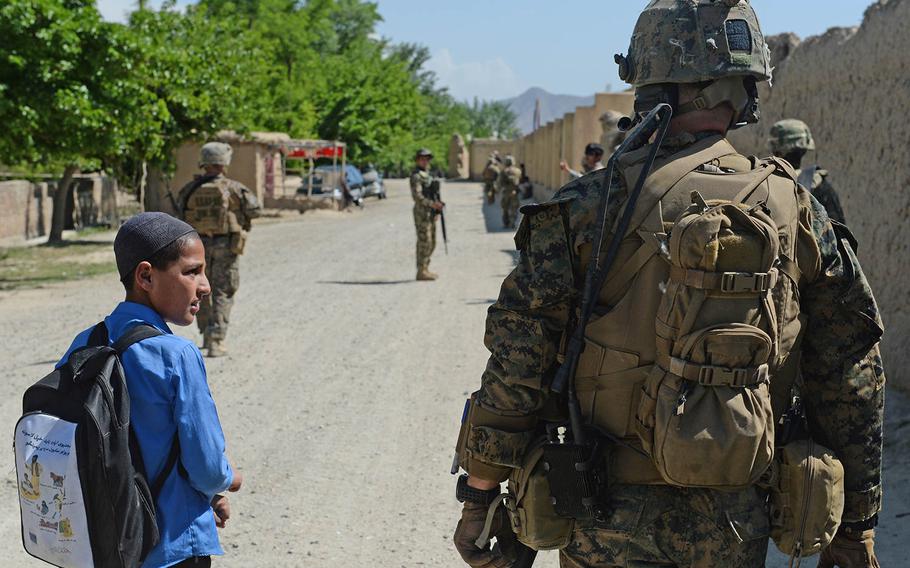 Marine Capt. Doug Capra, a joint terminal attack coordinator, is accompanied on patrol by an Afghan child near Bagram Airfield May 9, 2015. Capra is among about 50 Bagram-based Marines who make up the only Marine unit in Afghanistan. (Jad Sleiman/Stars and Stripes)

BAGRAM AIR FIELD, Afghanistan — “The Few” are fewer in Afghanistan seven months after the main Marine base at Camp Leatherneck shut down, but the Corps still has one unit in country, and it gears up and patrols outside the wire almost daily.

Bagram Air Field is unique among major coalition bases because it is not near any major Afghan National Army presence. It is the country’s main logistics hub rather than a train-and-advise base.

Still, indirect fire from mortars and rockets, as well as improvised explosive devices, threaten the soldiers and civilians who work here.

It’s here, months after the official end of the NATO-led combat mission and the closure of the Marines’ main Afghan hub in southern Helmand province, that men from Camp Lejeune’s 2nd Air Naval Gunfire Liaison Company lock and load before heading out on patrol with Georgian army partners to stem Taliban attacks.

“Primarily our main concern out here is (indirect fire), whether it be mortars or rockets,” said Marine Capt. Doug Capra, the team’s joint terminal attack coordinator. Some weeks there are no attacks, while during others, up to five. “That is the primary threat that is constant for the area.”

The Marines, numbering around 50, go on near daily patrols with soldiers from the 43rd Georgian Infantry Battalion. In the first few weeks of their deployment, they had uncovered a 100-pound IED, secured two Taliban rockets and rescued a wayward drone. They arrived in Afghanistan in April for a six-month deployment.

Patrolling together, the Marines and Georgian soldiers go through multiple translations from Dari to English to Georgian and back again.

“It’s pretty complicated,” said Georgian army Cpl. Boris Tsulaia, an interpreter with the team. “I’m doing my best and I hope the other interpreters are, too, because missing information is a bad thing out here.”

On a recent patrol, the biggest threats early on were rocks thrown at the convoy by local kids. One struck a Marine turret gunner’s armor with a dull thud before clanging into his Mine-Resistant Ambush Protected vehicle.

But the men don’t seem to take it personally. It’s something of a game for the kids, they said, and those children greeted the troops with smiles and laughter when they dismounted for patrol.

The Marines and soldiers met with elders and jotted down their security and civic concerns before beginning their return to Bagram.

Overhead aircraft spotted a six-man IED team digging along the route. The patrol avoided the explosives. But later that evening, another patrol’s MRAP took the blast. No one on board was injured.

Maj. Gen. Mike Murray, commander of the Army’s 3rd Infantry Division, said as long as Americans or their interests are in Afghanistan, there will likely be teams like the Marines out on patrol, or at least overseeing other forces doing the patrolling.

“If there were no rockets flying we wouldn’t be in the [ground defense area],” he said. “That’s really the only reason we’re in there.”

American soldiers at Bagram are preparing an Afghan military police unit to eventually take responsibility for protecting the base, but Murray said that’s still a long ways off. Meanwhile, the Marines aren’t complaining, seeing this “as a unique opportunity to get the combat deployment and be outside the wire in a force-protection role and a lot of Marines see it as an invaluable experience,” said Maj. James Geiger, the officer in charge of the Marine team.