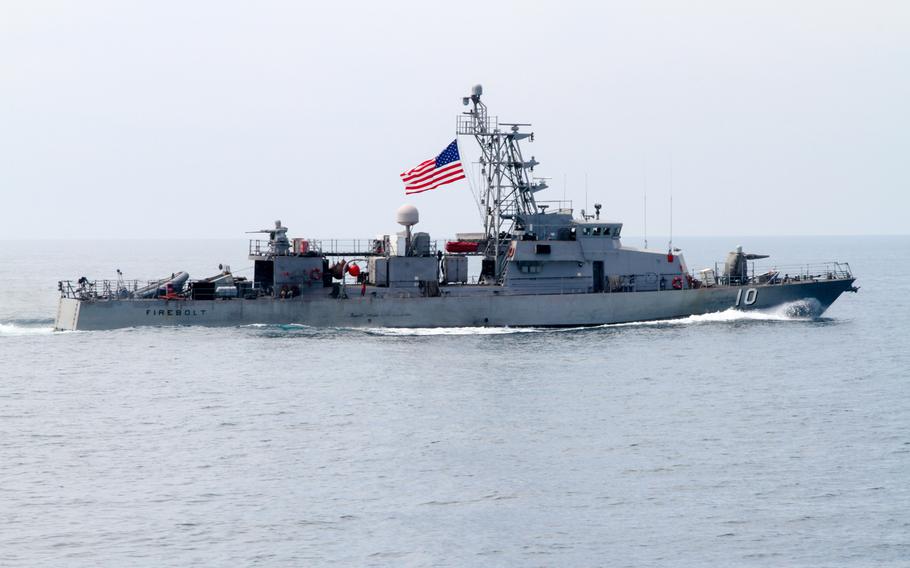 The USS Firebolt, a U.S. 5th Fleet coastal patrol ship, in the Persian Gulf in 2014. Three coastal patrol ships and the destroyer USS Farragut are supporting an "accompanying" mission in the Strait of Hormuz, Friday, May 1, 2015, to provide U.S.-flagged commercial vessels transiting the strait with additional security. (Hendrick Simoes/Stars and Stripes)

The USS Firebolt, a U.S. 5th Fleet coastal patrol ship, in the Persian Gulf in 2014. Three coastal patrol ships and the destroyer USS Farragut are supporting an "accompanying" mission in the Strait of Hormuz, Friday, May 1, 2015, to provide U.S.-flagged commercial vessels transiting the strait with additional security. (Hendrick Simoes/Stars and Stripes) 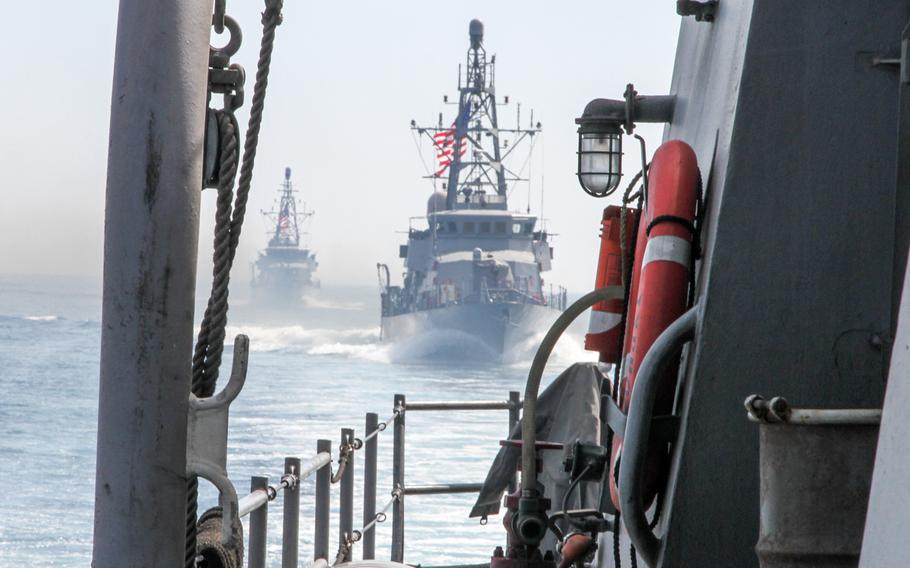 U.S. Navy coastal patrol ships in the Persian Gulf in 2014. Three of the vessels and the destroyer USS Farragut are supporting an "accompanying" mission in the Strait of Hormuz, Friday, May 1, 2015, to provide U.S.-flagged commercial vessels transiting the strait with additional security. (Hendrick Simoes/Stars and Stripes)

MANAMA, Bahrain — Navy warships have started accompanying U.S.-flagged vessels through the Strait of Hormuz in the latest move to reassure maritime traffic after Iranian ships seized a ship flying the flag of a U.S.-protected island nation.

The decision was based on a recommendation by U.S. Central Command, which is responsible for U.S. military operations in the Middle East, American defense officials said.

The Navy has accompanied four U.S.-flagged ships and one British vessel through the strait so far, according to The Associated Press. The U.S. ships belonged to the Military Sealift Command or were contract vessels with civilian crews, Pentagon spokesman Col. Steve Warren told the AP.

Cmdr. Kevin Stephens, a spokesman for the U.S. 5th Fleet, said Friday that the Navy would accompany U.S.-flagged vessels that want such support during transits through the strait. “U.S. naval forces will transit the strait along with and nearby such shipping, although it is not as though they’ll necessarily be in some sort of convoy or formation,” he said.

Between 20 and 25 U.S.-flagged ships sail through the Strait of Hormuz each month. U.S. 5th Fleet, whose area of responsibility covers about 2.5 million square miles of water in the region, is coordinating with shipping industry representatives to ensure “accompanying” operations are conducted smoothly and efficiently, Stephens said.

Navy ships will be in continuous radio contact with the commercial ships and possibly may stay in visual contact during their transit of the strait, officials said.

For security reasons, officials would not specify the types and number of U.S. warships involved.

After’s Iran’s seizure on Tuesday of the Marshall Islands-flagged MV Maersk Tigris, which was was transiting through the Strait of Hormuz, the Arleigh Burke-class destroyer USS Farragut and three coastal patrol ships were dispatched to vicinity to monitor the situation.

Those ships, along with maritime patrol and reconnaissance aircraft, will continue to operate in the area to support the current mission.

Coastal patrol ships, known as PCs, are 179-foot vessels that Navy officials say are ideally suited to operations in the Middle East. Routinely tasked to escort other ships, provide maritime security, protect infrastructure, they often participate in exercises with regional allies. The U.S. Navy increased the number of coastal patrol ships in the U.S. 5th Fleet to 10 last year, doubling the PC fleet here as part of a Navy realignment plan launched in 2013.

This is not the first time the Navy has conducted escort operations in the Persian Gulf. In 1987-88, during the war between Iran and Iraq, the Navy routinely accompanied convoys of oil tankers and cargo steamers from Kuwait and other neutral nations through to prevent attacks by Iranian warships and aircraft.

About a fifth of the world’s oil supply transits the Strait of Hormuz, and it’s the only sea passage for several Arab states in the Persian Gulf. The strait is one of three critical choke points for maritime traffic in the region. American warships from the Bahrain-based U.S. 5th Fleet and allied naval forces routinely patrol the narrow waterways to ensure freedom of navigation.

The MV Maersk Tigris remains in Iranian custody. A spokesman for the Danish shipper, Michael Storgaard, said the company learned Thursday that an Iranian appeals court had ruled the company must pay $3.6 million for a 10-container cargo delivered a decade ago on behalf of an Iranian company in Dubai. However, the cargo never was collected, according to Storgaard, who added it was eventually disposed of by United Arab Emirates authorities.

Storgaard said Copenhagen-based Maersk Line will “do everything we can to resolve this matter.”

The Maersk Tigris is operated by Rickmers Ship Management in Singapore.

Correction: An earlier version of this story gave the incorrect length of a U.S. Navy coastal patrol ship. It is 179 feet long.