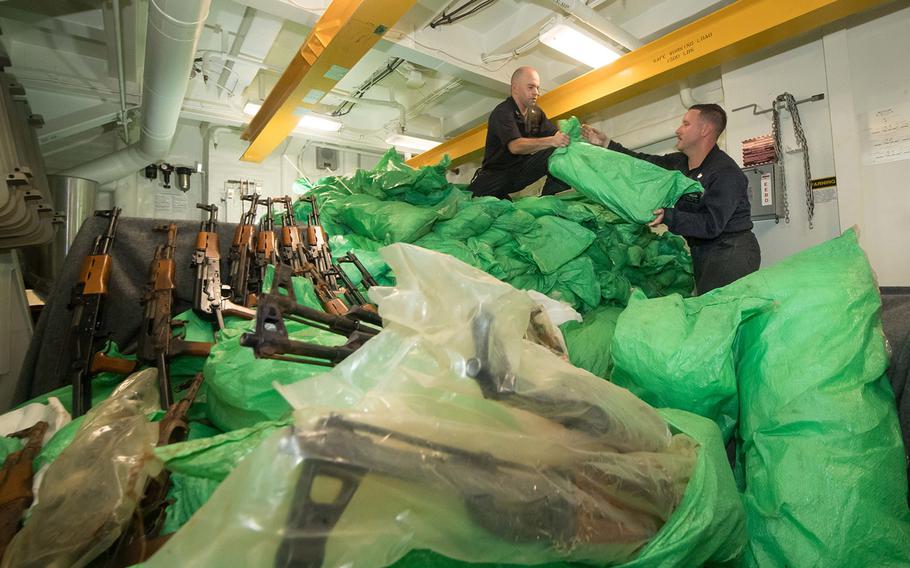 WASHINGTON — U.S. Navy sailors seized more than 1,000 AK-47s from a small, disabled boat in the Gulf of Aden this week after boarding the vessel to determine its nation of origin, service officials said Thursday.

Sailors aboard the guided-missile destroyer USS Jason Dunham on Monday observed unmarked packages being transferred onto a skiff from a small, masted sailing vessel, known as a "dhow." U.S. sailors boarded the craft Tuesday to investigate, according to Navy officials. The skiff was sailing in international waters near Yemen without flying a country’s flag and determined to be “stateless,” the officials said.

Once aboard the boat, sailors discovered the cache of illicit automatic rifles, according to the Navy.

Service officials have yet to determine the original source of the weapons, which remain in American custody. The officials declined to discuss the intended destination of the rifles and said an investigation into the incident was ongoing.

The individuals aboard the skiff were brought aboard the Dunham as part of a safety-of-life-at-sea operation and transferred into the custody of the Yemeni Coast Guard, according to the Navy.

The Dunham’s commander, Cmdr. John Hamilton, said in a statement that his ship regularly conducts similar operations to search vessels in the area. Another Navy official said such a large cache of weapons is unusual to find.

“Ensuring the free flow of commerce for legitimate traffic and securing the sea lanes of communication continue to be paramount to the U.S. Navy and its regional partners and allies, and I am proud of Jason Dunham’s sailors for accomplishing the mission,” Hamilton said.

The Gulf of Aden connects the Indian Ocean to the Red Sea and is a heavily trafficked shipping route, especially for oil. In the early 2000s, it was known as a notorious area for pirate activity, and more recently, U.S. officials have said Iran has regularly used the passage to secretly transport arms to the Houthi rebels it supports against the Yemeni government.

The civil war in Yemen has raged for more than three years and has left tens of thousands dead. The United States has supported the Saudi Arabia-led coalition backing Yemen’s U.N.-recognized government with weapons, intelligence and aerial refueling operations, according to the Pentagon.

Defense Secretary Jim Mattis pledged continued support for the Saudi-led operations this week, amid calls by some lawmakers in Congress to withdraw American support, citing reports of high civilian death tolls due to Saudi airstrikes.