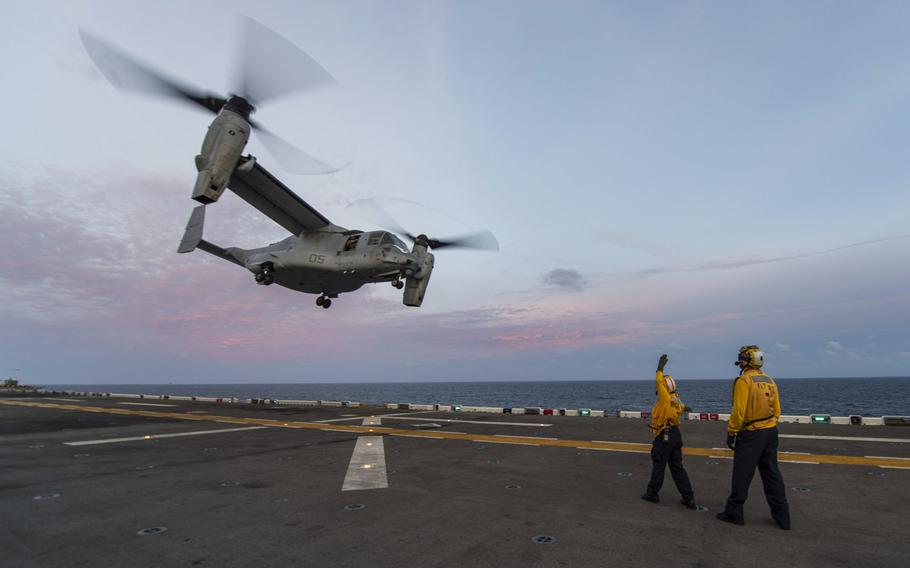 A Navy crewmember signals an MV-22 Osprey to launch from the flight deck of the amphibious assault ship USS Makin Island on Sept. 9, 2014, while the ship was underway in the Indian Ocean. (Christopher Lindahl/U.S. Navy)

MANAMA, Bahrain — U.S. Navy aircraft and vessels were searching Wednesday for a crew member who bailed out of a Marine aircraft over the Persian Gulf.

Two aircrew members bailed out of an MV-22 Osprey after the aircraft lost power when taking off from the amphibious assault ship USS Makin Island, U.S. 5th Fleet officials said. One of the aircrew members was safely recovered and is in stable condition aboard the Makin Island.

Officials said the Osprey's pilot was able to regain control of the aircraft and return to the ship.

The Makin Island came into the U.S. 5th Fleet area of responsibility last month on a scheduled deployment. The ship is supporting ongoing operations in Syria and Iraq.