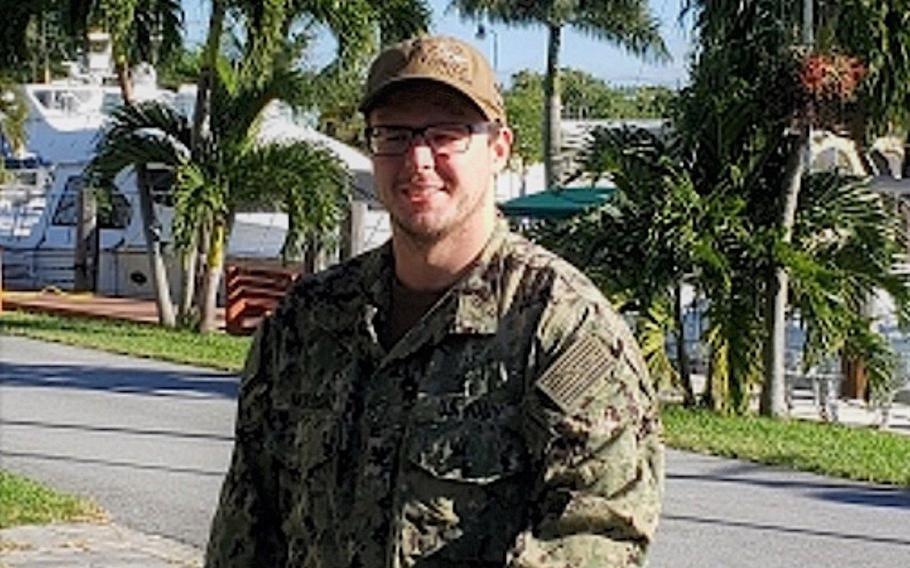 The Navy has ended the search for Petty Officer 2nd Class Ian McKnight, a missing U.S. sailor in the North Arabian Sea, more than 48 hours after a “man overboard” alert was sounded. ()

The Navy ended the search for a missing U.S. sailor in the North Arabian Sea, officials said more than 48 hours after a “man overboard” alert was sounded aboard the USS Nimitz aircraft carrier, officials said Tuesday.

The Nimitz and the guided-missile cruiser USS Princeton began the search for 29-year-old Petty Officer 2nd Class Ian McKnight on Sunday, after officials conducted a muster and thoroughly searched the carrier for him, said Cmdr. Rebecca Rebarich, spokeswoman for the Bahrain-based U.S. 5th Fleet.

Search and rescue operations began after the alert was sounded at 6:47 p.m. that day, she said. Air Force aircraft joined in the search before it was ended on Tuesday.

“We are deeply saddened as we call off the search for IT2 Ian McKnight,” Capt. Max Clark, commanding officer of the Nimitz, said in a statement on Tuesday night. “We hold his family and his friends in our hearts during this difficult time.”

His next of kin had been notified that he was listed duty status whereabouts unknown, or DUSTWUN, Rebarich said. That casualty status is used when there’s not enough evidence to determine the cause of a sailor’s absence, but officials have reason to believe it’s not a voluntary “unauthorized absence,” or UA, the Navy equivalent of AWOL.

Under Navy regulations, a commander has up to 10 days to conduct search and rescue efforts, investigate a sailor’s disappearance, and make preliminary assessments and recommendations.

After that, if the sailor or their remains have not been recovered and there is no conclusive evidence of death or UA, the commander may list the person as “missing.”

A person may also be listed as deceased, even if their remains are not recovered, if there is enough evidence to overcome “any reasonable doubt or logical possibility” that the sailor may have survived, regulations state.

The Arabian Sea covers about 1.5 million square miles in the northern part of the Indian Ocean, stretching from the Horn of Africa and Arabian Peninsula in the east, to India in the west. It connects to the Red Sea via the Gulf of Aden and the Persian Gulf via the Gulf of Oman.

The search this week came more than 13 months after an extensive operation in the same sea failed to find Petty Officer 2nd Class Slayton Saldana, a sailor who had reportedly gone overboard from the carrier USS Abraham Lincoln and was declared dead several days later on July 30, 2019.

McKnight, of North Carolina, enlisted in the Navy in February 2018 and was assigned to the Nimitz the following February. His disappearance remains under investigation, Rebarich said in a statement.

The Nimitz is the flagship of Carrier Strike Group 11 and is deployed to the 5th Fleet area of operations to patrol the waters and ensure the security of critical chokepoints in the U.S. Central Command region connecting the Mediterranean Sea and Pacific Ocean through the Western Indian Ocean.

“The strike group team sends our thoughts and prayers to the family of Petty Officer McKnight,” said Rear Adm. Jim Kirk, the strike group’s commander. “I offer my thanks to all the sailors and airmen who were involved in the search for our shipmate.”