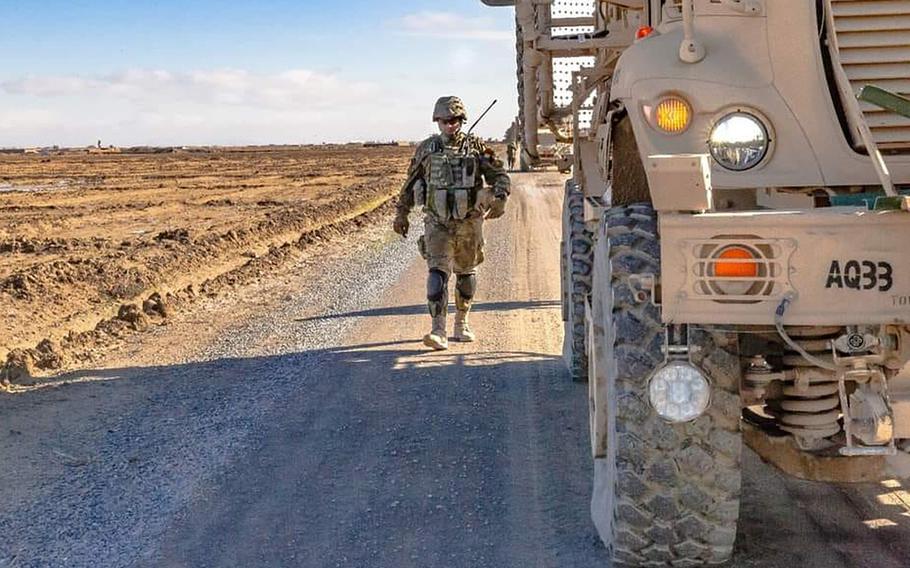 A Romanian soldier walks next to his armored vehicle in Afghanistan, in an undated photo. On Wednesday, two Romanian soldiers were injured by a bomb blast in Kandahar province. (Romania Ministry of Defense/Facebook)

The soldiers were on a patrol in Kandahar province Wednesday when the improvised explosive device detonated, the statement said.

The Romanian government identified the soldiers as Sgt. Adrian Ioan Czifrak and Cpl. 2nd Class Iosif Ioan Reman, who are both in stable condition at a Kandahar Airfield hospital. The two soldiers were traveling in a convoy of Mine Resistant Ambush Protected vehicles when they were injured, the statement said.

Violence has raged across Afghanistan in recent days, threatening 6-week-old peace talks in Qatar between the Taliban and the government.

A deadly offensive last week by the Taliban in Helmand province drew accusations that the militant group was openly flouting a deal it signed with the U.S. in February, under which all foreign troops could leave the country by mid-2021.

The U.S. launched air strikes to defend Afghan forces during those attacks, and the head of American and NATO forces in Afghanistan, Gen. Scott Miller, called on the Taliban “to immediately stop their offensive action in Helmand Province and reduce their violence around the country.”

But the United Nations said Wednesday that the offensive in Helmand was continuing, and tens of thousands of Afghans had been displaced by the fighting.

Miller repeated his call for a reduction in violence in an interview with the BBC on Wednesday during a visit to the southern province.

“I am specifically asking the Taliban to bring down the violence and it can’t be one-sided; all sides need to bring it down,” he told the BBC.

Elsewhere in the country, officials in the northern province of Takhar said 12 people, including children, were killed in an airstrike by government forces on a religious school.

A spokesman for the provincial governor, Mohammad Jawad Hijri, said a religious iman and students were killed in the attack and 14 others were wounded.