Mosul freed of ISIS, but it could be years before some Iraqis can return home 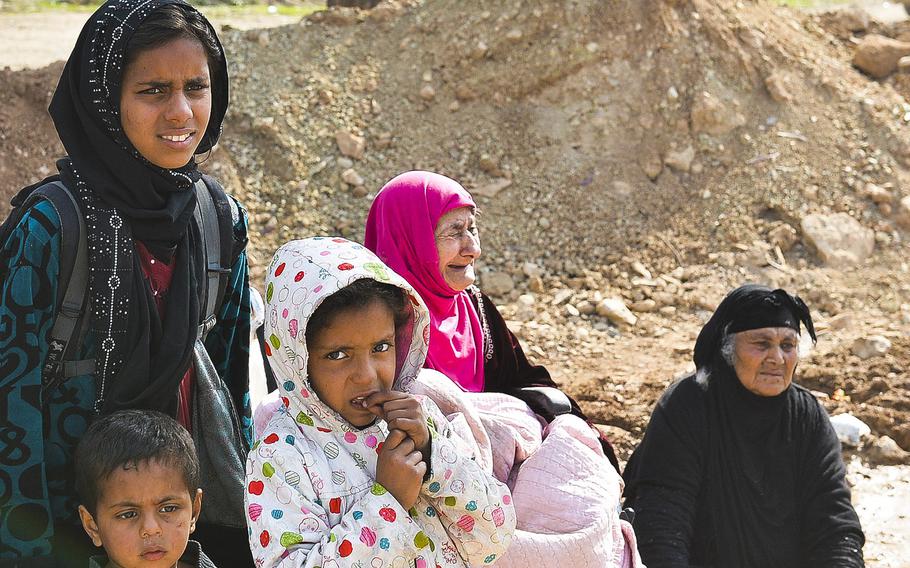 Women and children wait for transportation to camps for people displaced from Mosul, Iraq, on Wednesday, March 8, 2017. (Chad Garland/Stars and Stripes)

WASHINGTON — Mosul, where Abu Bakr al-Baghdadi declared the Islamic State's caliphate three years ago, has been freed from ISIS’s grip, but months of brutal fighting has left large portions of the Iraqi city uninhabitable, according to U.S. and United Nations officials.

It could be months, and in some cases years, before Mosul residents will be able to return to their homes in western parts of the city where the most vicious fighting took place, according to the United Nations, which estimates it will cost nearly $1 billion simply to stabilize the city in the short term. Some 700,000 Mosul residents remain displaced in 19 encampments outside the city. Yet a day after Iraqi Prime Minister Haider al-Abadi declared victory over ISIS in Mosul, there were still reports Tuesday of continued fighting between Iraqi forces and militants.

“The humanitarian crises is not [over],” Lise Grande, the UN’s humanitarian coordinator for Iraq, said after al-Abadi’s victory speech late Monday. “The levels of trauma we are seeing are some of the highest anywhere. What people have experienced is nearly unimaginable.”

She estimated 32,000 homes were entirely destroyed in the 15 neighborhoods of West Mosul, where the heaviest fighting occurred. The city, Iraq’s second largest, once boasted nearly 2 million residents.

The worst destruction occurred in and around Mosul’s Old City, the site of ISIS’s last stand in its once Iraqi capital and the largest population center that the terrorist group has ever controlled.

The damage was to be expected, Townsend told reporters Tuesday at the Pentagon.

“We started on the east side because we thought it would be easier there,” he said from Baghdad. “We knew the fight on the west side was going to be tougher and we knew that the fight in Old Mosul, their final fallback position, was going to be even tougher.”

U.S.-backed Iraqi forces completed the liberation of East Mosul in about 100 days, quickly pushing ISIS forces from the portions of the city east of the Tigris River, which minimized the damage there, Townsend said.

About 200,000 once-displaced residents have already returned to their homes in East Mosul, where UN-led efforts have restored water treatment plants and electricity utilities, according to the State Department. More so, 320 of 400 schools in the city’s eastern portion have reopened, the State Department said.

West Mosul is a different story.

Iraqi forces were often bogged down in densely populated portions of West Mosul, leading to weeks of ground fighting and devastating air and artillery strikes to recapture just a few blocks.

“So I’m not surprised at the level of destruction,” Townsend said. “I think [there was] probably double the destruction than on the east side.”

The UN and the Iraqi government will lead efforts to stabilize and eventually rebuild the city. The UN is seeking $562 million to help with immediate stabilization efforts in addition to $424 million that has already been pledged for humanitarian projects. The U.S. Agency for International Development announced earlier this month that it would contribute $150 million to the UN efforts.

A State Department official, who spoke on condition of anonymity, said additional funding for Iraqi stabilization will be the responsibility of the Iraqi government, which believes it will cost $100 billion to rebuild portions of the nation once controlled by ISIS. The State Department and the anti-ISIS coalition are working with the Iraqis to secure funding through organizations including the World Bank and the International Monetary Fund.

Townsend told reporters that it will take “weeks” to entirely clear ISIS from a few pockets where some militants remain. Iraqi security forces will spend as much time as needed to clear explosives and militants from the city before full stabilization efforts can begin, he said.

While U.S. troops will remain in Mosul to help with those short-term efforts, Townsend said it is unlikely they will assist with humanitarian or rebuilding efforts there.

“I don’t think you’ll see coalition forces significantly involved in the stabilization efforts,” he said. “The Iraqi government is not asking us to do that.”

Instead, U.S. and coalition forces will continue to aid Iraqi security forces as they turn their attention to other ISIS-held areas of Iraq. Their first aim will be to liberate Tal Afar, a city about 40 miles west of Mosul that has been controlled by ISIS since 2014.

That battle could start “in the coming weeks,” Townsend said.

“[The Iraqis] have a plan for Tal Afar,” he said. “… We’ll stand side by side with our partners against ISIS until they are defeated in both Iraq and Syria."