More American Apaches, troops could be needed in retaking Mosul from Islamic State 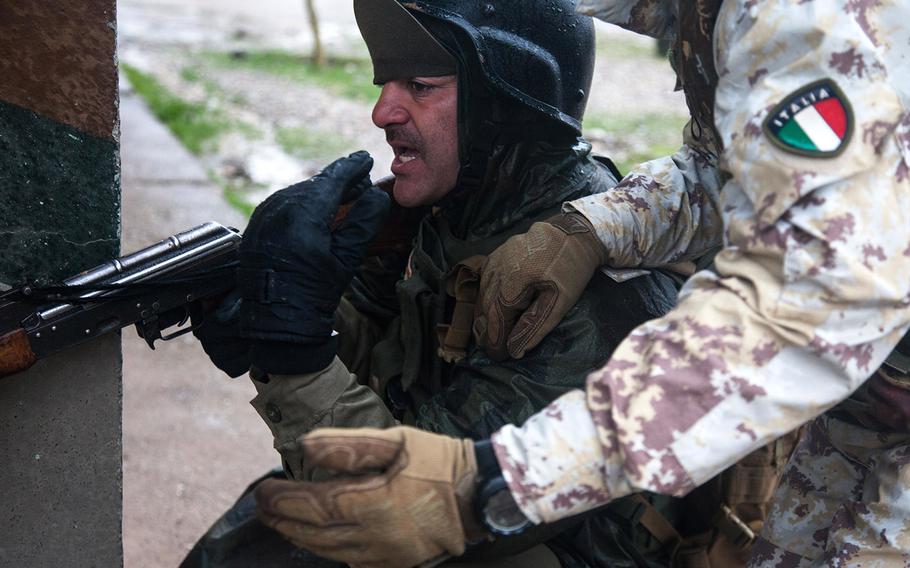 An Italian trainer provides one-on-one instruction to a Peshmerga fighter during a break from contact drill near Irbil, Iraq, Jan. 6, 2016. Coalition trainers in Northern Iraq have trained more than 6,000 Peshmerga soldiers in basic and advanced infantry skills. (Jacob Hamby/U.S. Army)

The United States could need more troops — including attack helicopters — in Iraq as it prepares Iraqi forces to retake Mosul from the Islamic State group, the top U.S. general there said Monday.

Army Lt. Gen. Sean MacFarland said the United States is weighing options to “accelerate” the campaign, which could include expanding its 3,700-troop force there. The additional troops would help more quickly train about 10 brigades of Iraqi troops and Kurdish Peshmerga fighters assigned to liberate Mosul, the country’s second largest city, which was seized by Islamic State fighters in May 2014.

“All of us in uniform are preparing various options and the president will decide,” the general told reporters Monday at the Pentagon during a video briefing from Baghdad. “… Certainly we’ll do everything we can to continue this campaign by, with and through the indigenous forces that are on the ground.

“That’s really the best way to defeat the enemy, we believe.”

It remains unclear when ground operations against Mosul could begin. The Operation Inherent Resolve coalition has trained nearly 20,000 Iraqi troops for the fight and has another roughly 3,000 in training. The siege of Mosul, a city much larger than Ramadi, could require up to 30,000 troops, Army Col. Steve Warren, an OIR spokesman, estimated last week. About 10,000 Iraqi troops participated in the Ramadi offensive, though most of the fighting was led by Iraq’s elite Counter-Terrorism Service, a force largely expected to lead the fight again in Mosul.

Iraqi commanders have estimated their forces would be prepared to take Mosul by the end of the year or the beginning of 2017. MacFarland declined to speculate Monday, saying only that he wants “to get this wrapped up as soon as I possibly can.”

In recent months, the United States has expanded its own role in the fight against the Islamic State militants primarily through the use of special operations forces. In Iraq, it added some 200 troops called an Expeditionary Targeting Force to conduct raids and gather intelligence. It additionally added about 50 special operators in Syria to work with ingenious forces fighting the militant group there. MacFarland, like other Pentagon leaders, declined to comment on the special operations groups.

Those forces are not expected to serve on the front lines in assaults on major cities such as Mosul or Raqqa, the Islamic State’s self-declared capital in Syria, Pentagon officials have said.

On Monday, MacFarland told reporters he did not want to provide specific details about the options he’d lay out to Pentagon leaders for any further increases in the United States’ role in Iraq.

“I believe surprise is a really underappreciated principal of war,” he said. “ … I don’t want to get too much into what those precise capabilities would be because I’d like the enemy to find out about it for the first time when the area around them is going up in smoke.”

But they could include American AH-64 Apache attack helicopters. MacFarland said the options that the United States provided Iraqi Prime Minister Haider al-Abadi in the lead-up to the assault late last year on Ramadi – including American-flown Apaches – are still possible.

Al-Abadi did not explicitly turn down the offer for the United States to provide Apaches to take Ramadi, MacFarland said. Instead, the prime minister simply didn’t see the need for them at that time, the general said.

“He didn’t say, ‘no.’ He said, ‘Maybe a little bit down the road we’ll need it for other places,’” MacFarland said. “… We are in a constant dialogue with the Iraqis about what kind of support they require and we can provide.

“They have to ask for it, and they have to want it, and we’re here to provide it as required.”