Mobile exchange a lifeline for troops at remote Afghan posts 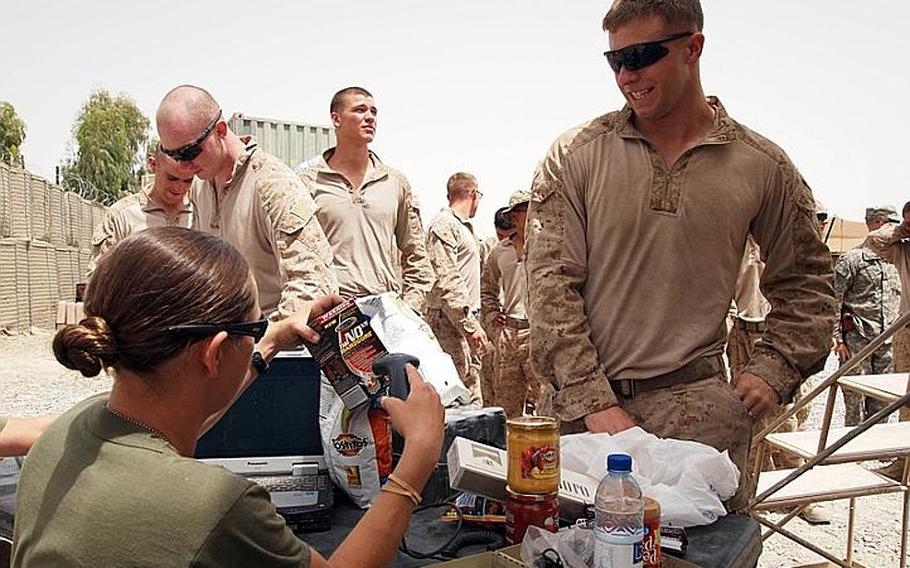 PATROL BASE JAKER, Afghanistan &mdash; About the worst thing that can happen to a grunt in Afghanistan, when not engaged in battle, is running out of tobacco.

So when the mobile exchange, a little convenience store on wheels, rolls into a remote base, the scene is similar, in miniature, to one you might find at, say, Toys &ldquo;R&rdquo; Us the day after Thanksgiving &mdash; only with guns.

&ldquo;Nobody really likes coming to do it, because everybody&rsquo;s here at once, but everybody needs it to take care of the stuff they need,&rdquo; said Cpl. Jesse Conlee, a squad leader based at Fasludeen, a remote outpost where Marines are partnered with Afghan police.

Conlee and most of his guys drove the few miles from Fasludeen to Patrol Base Jaker, where the Marines of Company C, 2nd Battalion, 3rd Marine Regiment rally on PX days, to fill those needs. It&rsquo;s a pretty short list.

&ldquo;The biggest thing, sadly, is the nicotine,&rdquo; he said. &ldquo;It&rsquo;s the same thing for me. You know, cigarettes, if I&rsquo;m running low on cigarettes it&rsquo;s not a good day for anybody.&rdquo;

Sgt. Amy Hastie, who works the register for the rolling convenience store, spends much of her time on the road, making her way from one isolated position to the next. In that way it&rsquo;s not all that different from long-haul trucking; but she&rsquo;s in Helmand province, a region that in places is infested with roadside bombs. She realizes that, as far as cashier jobs go, she has one of the most dangerous gigs outside of Detroit.

&ldquo;It&rsquo;s worth it to these guys, though,&rdquo; Hastie said. &ldquo;This is all they have. They don&rsquo;t have a PX.&rdquo;

Depending on how many outposts she and her colleagues hit in a day, they&rsquo;ll bring in anywhere from $5,000 to $10,000 she said, most of it from cigarettes, iced tea, Monster energy drinks, packaged tuna and chicken, workout supplements, chips and salsa.

&ldquo;If it weren&rsquo;t for us and the mail, they wouldn&rsquo;t get anything out here,&rdquo; she said.

About a month and a half had gone by since the last time Lance Cpl. Guy Kreiner had seen the truck. The top three items on his list: cigarettes and chewing tobacco for himself; cigarettes for his team leader, who had to stay back at Loy Jalah, another position where Marines mentor police.

But Kreiner also bought baby wipes, beverages, snacks and, being a thoughtful guy with a sensitive nose, Febreeze.

&ldquo;It&rsquo;s for everyone,&rdquo; he said. &ldquo;It gets pretty bad over where we&rsquo;re staying at; it&rsquo;s pretty [smelly] with everybody&rsquo;s boots and socks from patrolling.&rdquo;

The PX truck didn&rsquo;t rate as highly for Lance Cpl. Luis Frias as it does for some &ndash; namely, the Marines with nicotine addictions. But he did buy about two cases of caffeinated, tall-boy-sized beverages. &ldquo;Keep me awake, keep me alive,&rdquo; he said.

Talking at a pace that suggested he&rsquo;d already drained half his stash, he explained the No. 1 thing he looked forward to during deployment was &ldquo;getting into a firefight, you know, trying to get some kind of action, because, you know, that&rsquo;s the whole reason we young guys got into this.&rdquo;

Lamenting that, unlike the PX truck, the Taliban hadn&rsquo;t come around this part of Nawa, he added, &ldquo;That&rsquo;s what I really want is to get some.&rdquo;