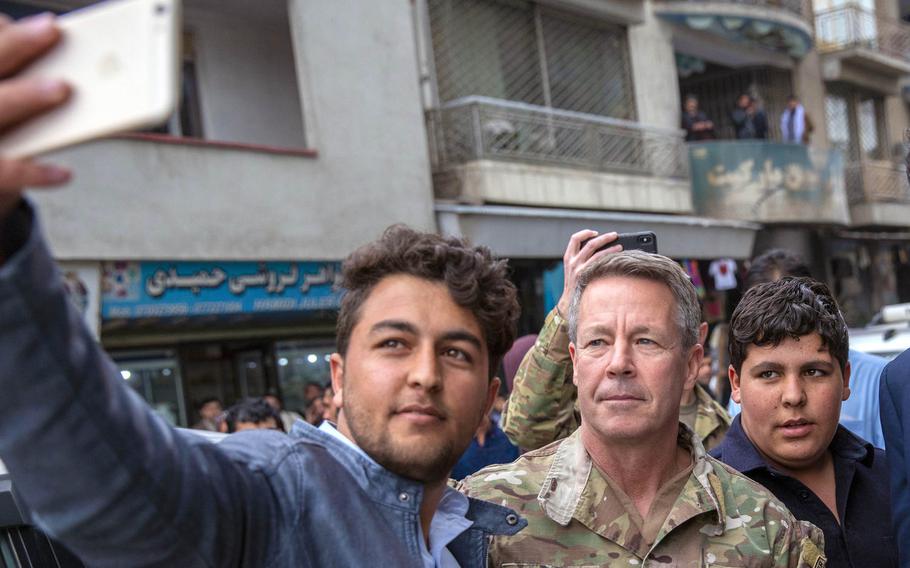 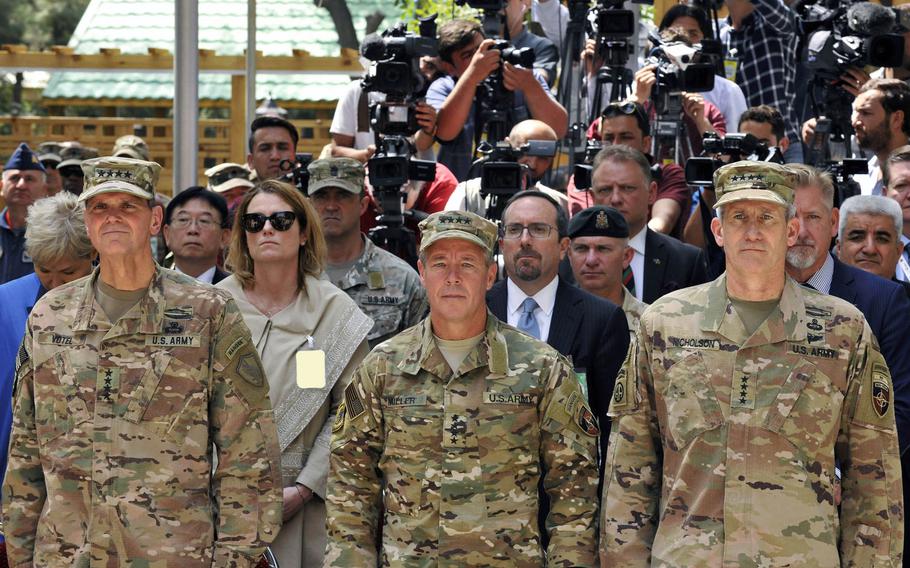 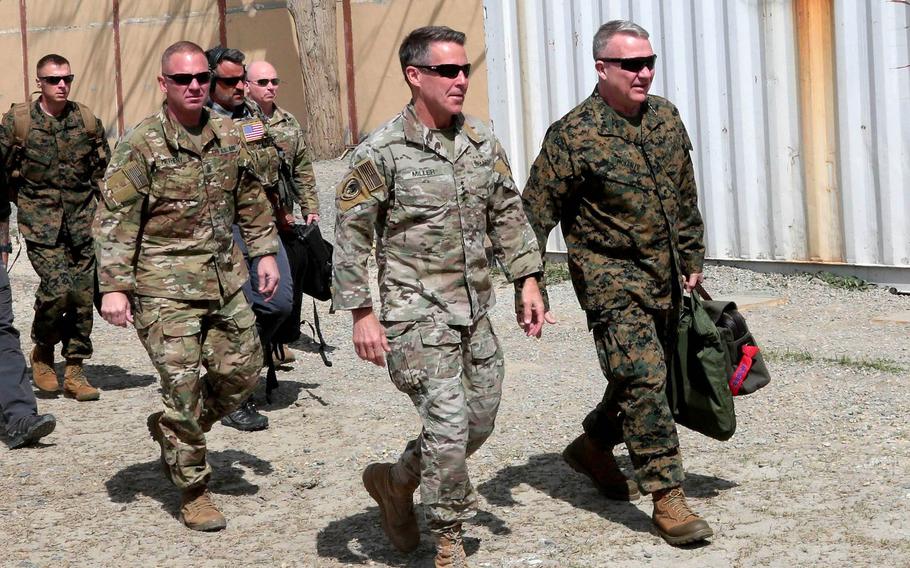 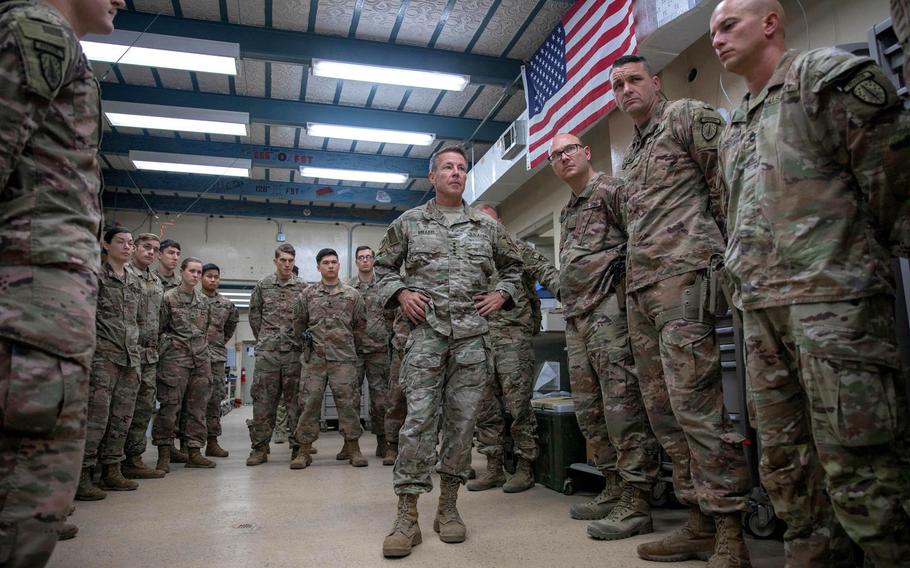 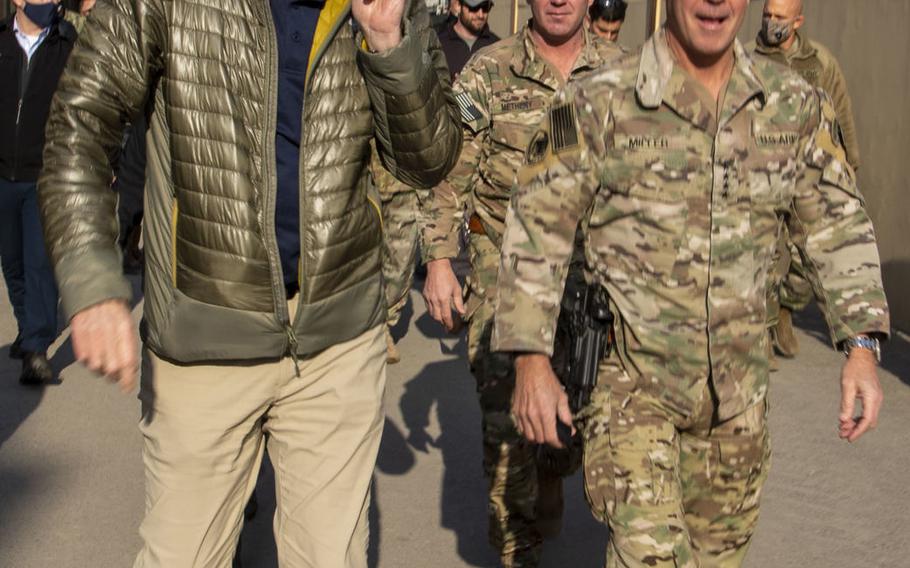 “The world recognizes we cannot fail,” Miller said when he was sworn in as the 17th commander overseeing the U.S. and NATO mission on Sept. 2, 2018, taking over from Gen. John Nicholson, who was at the helm for 914 days.

Since then, Miller, who turns 60 in May, played a key role in a historic deal with the Taliban and has overseen a U.S. drawdown amid rising violence among Afghans.

But under the Army general’s command, transparency about the U.S.’s actions in the war has shrunk while territory under Taliban control has grown to reach the highest level since the U.S.’s arrival in 2001.

The former leader of Joint Special Operations Command has mostly remained out of the public eye during his time in Afghanistan. But within weeks of assuming command, he made headlines when he escaped an attack in Kandahar that killed provincial police chief Gen. Abdul Raziq and wounded several others, including Army Brig. Gen. Jeffrey Smiley. The Taliban claimed responsibility.

One of Miller’s tasks during his tenure has been to maintain the Afghan government’s trust in the United States. That was shaken early when the Trump administration excluded Kabul from talks with the Taliban, which began in late 2018 – around the same time then-President Donald Trump announced plans to slash the number of U.S. troops fighting overseas, including in Afghanistan.

The moves out of Washington put Miller “in react mode very early on in his time in command,” said Jason Campbell, a policy researcher at Rand Corp., who has worked with Miller on several occasions.

“Everyone was operating under some level of uncertainty as to what the White House was going to decide or state publicly next,” Campbell said in a phone interview.

Miller worked behind the scenes to convince Trump not to pull all U.S. troops out of Afghanistan, said Michael O’Hanlon, senior fellow at the Brookings Institution policy group.

“He persuaded Trump to be more patient and careful than the initial instinct of the commander in chief,” O’Hanlon said.

Miller brought a no-nonsense military attitude to the table when he attended the talks with the Taliban in Qatar and showed himself to be “a skilled negotiator,” a U.S. administration official who was at the talks said.

“He had a calm diplomatic demeanor, but he also called it like it was when it came to levels of violence, going toe-to-toe with the Taliban in a way that we weren’t seeing from other U.S. diplomatic officials,” the official, who insisted on anonymity because they were not authorized to speak on the matter, said in a telephone interview.

“He consistently pressed the Taliban to reduce violence and made clear to them that the U.S. would continue to defend Afghan security forces if necessary,” the U.S. official said.

The talks culminated in the February 2020 deal, which said all foreign forces would leave Afghanistan by May if the Taliban met several conditions, including barring terrorist groups like al-Qaida from using Afghanistan to recruit new fighters or launch attacks on the U.S. and its allies.

U.S. troop numbers in Afghanistan fell from about 13,000 to 8,600 less than five months after the deal was signed, and by January, they were down to around 2,500. But critics have said the Taliban have consistently flouted the agreement by maintaining links with al Qaida. They’ve also ramped up attacks against Afghan security forces.

Miller has admonished the Taliban, including in October, when he called on them to “reduce their violence around the country” and immediately end an offensive in Helmand province.

The statement was made via the Twitter feed of U.S. Forces-Afghanistan spokesman Col. Sonny Leggett immediately after an announcement that the U.S. had launched airstrikes against Taliban positions in Helmand.

The public statement was rare. Under Miller, who declined to be interviewed through his staff, the military has become increasingly opaque about its actions.

In May, the military stopped publishing monthly tallies of airstrikes in the country, something it did for most of the war, which began in 2001.

Journalists have seen access to NATO troops, officers and bases heavily restricted under Miller in comparison to previous years.

And although the official Twitter account for the NATO commander in Afghanistan has Miller’s face on it, it doesn’t include a single tweet from him — only statements by his predecessor.

While the full details of the fighting remain unclear, U.S. and Afghan forces have teamed up to capture or kill several al-Qaida leaders in recent months, military officials have said.

But Miller’s legacy in Afghanistan depends on what happens in the coming months and how, or if, the U.S. withdraws while he’s in command.

Last month, he told Reuters news agency that Taliban violence was “much higher than historical norms,” which was not conducive to moving “forward in what is hopefully a historic turning point for Afghanistan.”

The Biden administration is reassessing the deal with the Taliban, and Defense Secretary Lloyd Austin has said the U.S. will not “undertake a hasty or disorderly withdrawal from Afghanistan.”

With the Taliban warning that they’ll resume attacks on foreign troops if the alliance does not leave the country by May, Miller may again have to use the diplomacy and directness he called on at the talks in Doha to help end a war that has killed over 3,500 NATO troops, including some 2,300 Americans, and tens of thousands of Afghans.