Military halts Afghanistan deployments, will extend some troops there amid coronavirus concerns 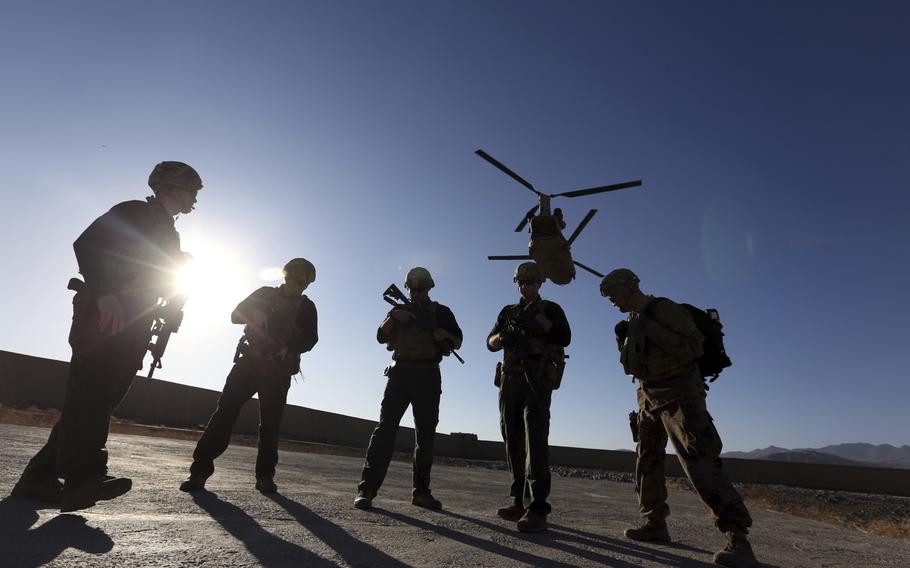 American soldiers wait on the tarmac in Logar province, Afghanistan, on Nov. 30, 2017. (AP)

KABUL, Afghanistan — The U.S.-led NATO mission in Afghanistan has stopped deploying troops to the country and has placed about 1,500 newly arrived service members and civilians into quarantine to prevent the spread of the coronavirus, military officials said Thursday.

The new measures mean some troops already in Afghanistan will have their deployments extended, a NATO Resolute Support statement said.

The announcement comes after some U.S. lawmakers last week voiced concerns that U.S. troops in Afghanistan were not properly protected from the pandemic.

The Resolute Support mission, which advises and assists Afghan security forces, said Thursday it was establishing screenings to test troops before they are sent to Afghanistan.

More training of Afghan forces will also be done online to help prevent the spread of the virus, the statement said.

NATO emphasized that the new arrivals in quarantine are there as a precaution and “not because they are sick.”

“Our priorities are clear: protecting the force and protecting our collective national interests,” the statement said.

So far, no coalition member has tested positive for the virus, a Resolute Support spokesman said.

The military in Afghanistan does not have a lab and sends test samples to Landstuhl Regional Medical Center in Germany, as well as civilian facilities.

Last week, Sen. Tammy Baldwin, D-Wis., and Rep. Mark Pocan, D-Wis., said troops from their state deployed to Afghanistan were experiencing symptoms of the disease but were denied testing.

The lawmakers’ statements came amid rising concerns of a coronavirus outbreak in Afghanistan, which borders Iran, one of countries most affected by the virus.

The situation in Iran has triggered thousands of Afghan refugees to return to their home country every day and health officials say some of are bringing the virus back with them.

On Wednesday, a Resolute Support spokesman said on Twitter that the U.S. is committed to drawing down its force of about 13,000 to 8,600, as it had agreed to do in a peace deal with the Taliban at the end of February. The deal set a mid-July timeline for the withdrawal.

Since the deal was signed, the spread of the coronavirus has led the Defense Department to issue a stop-movement order, while quarantining troops returning home.

Some 300 soldiers from the 82nd Airborne Division rotating home from Afghanistan were placed in quarantine over the weekend.

The remaining soldiers were still expected to return to the U.S. from the Middle East, the division’s spokesman, Lt. Col. Michael Burns, said Tuesday.

Stars and Stripes reporters Chad Garland and Zubair Babakarkhail contributed to this report.