Mail delivery to service members in Iraq to resume after suspension 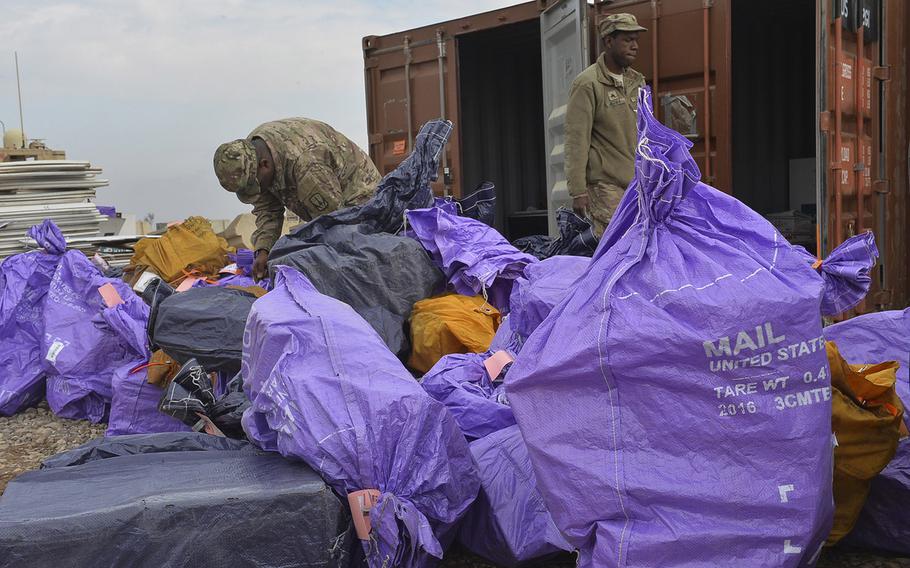 Mail delivery to military APO and FPO addresses in the country is set to resume Friday after a weekslong suspension that began in the wake of the U.S. killing of a top Iranian official and a retaliatory strike by Iran on two bases housing American forces.

“Our logisticians are pushing mail to troops as fast as possible,” said Col. Myles B. Caggins III, a military spokesman for the U.S.-led coalition in Iraq and Syria, on Wednesday. “Letters and care packages are big morale boosters.”

Deliveries to several posts were temporarily stopped Jan. 13, reportedly to prevent a backlog of mail in the days after the Jan. 8 ballistic missile strike that hit al Asad Air Base in western Anbar province and a base at the international airport in Irbil, the capital of Iraq’s Kurdish region. Since the missile strikes, the embassy compound and other bases housing U.S. troops have also come under sporadic rocket and mortar fire.

Downrange postal clerks are “unsung heroes” who sort truckloads of mail despite conditions that include “sandstorms, heat and the threat of occasional rocket attacks,” Caggins said.

Earlier in the week, some officials said the suspension had already been lifted, but an employee at a military post office in said Thursday that it remained in effect for several locations until the end of the week — though that could change.

Ronald Moeller, the father of a deployed soldier, confirmed with his local post office in South Dakota on Tuesday that it would again accept packages bound for military addresses in Iraq, he told Stars and Stripes. The following day, when he tried to mail a package, he was told it would not be accepted.

The State Department, to which the U.S. Postal Service and U.S. Central Command had referred earlier inquiries about the suspension, did not immediately respond to a request for clarification.

At the U.S. Embassy in Baghdad, the mailroom was “now open for normal operations,” an unnamed official there said in response to a query on Tuesday.

“We regret the delays, but have been working diligently to address the issues that led to a temporary stoppage,” the official said in an email.

The mail interruption in Iraq was the result of U.S. forces being repositioned in the country, a coalition official said over the weekend. At least some deliveries had resumed Saturday, the official said.

Some 5,200 American forces and several thousand allied troops make up the coalition’s contingent in Iraq, where they aid government forces battling the Islamic State group through training, advising and assisting them with intelligence, airstrikes and other combat support.

In the wake of a U.S. drone strike in Baghdad that killed Iranian Quds Force commander Maj. Gen. Qassim Soleimani on Jan. 3, the coalition had suspended training and support for Iraqi anti-ISIS operations and began moving troops to focus on increased security.

Last week, the Iraqi government announced that work with the coalition had resumed.