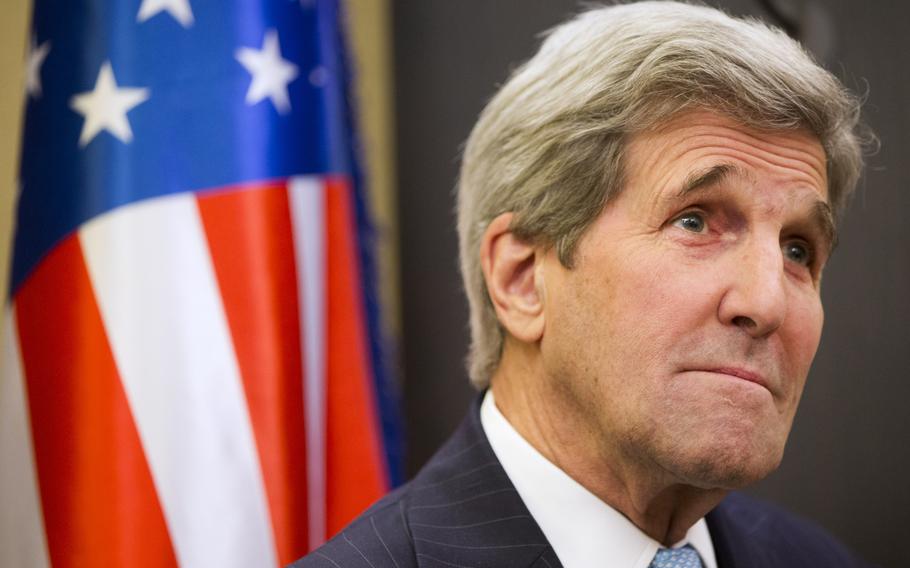 DAVOS, Switzerland — Next week's planned start of Syria peace talks may be delayed by "a day or two" for logistical reasons, but the process will begin roughly on time, U.S. Secretary of State John Kerry said Thursday.

Kerry said any delay in the U.N.-led negotiations would be due to sending out invitations to participants. Kerry met earlier with the U.N. special envoy for Syria, Staffan de Mistura, who is to convene the talks between the Syrian government and the opposition on Monday in Geneva.

"When you say a delay, it may be a day or two for invitations but there is not going to be a fundamental delay," Kerry told reporters as he sat down to meet with Israeli Prime Minister Benjamin Netanyahu at the World Economic Forum. "The process will begin on the 25th and they will get together and see where we are."

Kerry met Russian Foreign Minister Sergey Lavrov in Zurich on Wednesday in a bid to overcome differences over which Syrian opposition groups would be eligible to attend the talks. It was not clear if progress was made in resolving the issue, which has threatened to delay the talks.

After that meeting, Lavrov said the U.S. and Russia agreed that the Syria talks should not be postponed until next month. But both sides said there was still work to do on determining which opposition groups are deemed terrorist organizations and therefore ineligible for the peace talks and a cease-fire that is envisioned to take effect once the negotiations begin.

The negotiations are the first step in a U.N.-endorsed 18-month political transition plan for Syria aimed at ending the nearly five-year civil war.

Russia and Iran, which back Syrian President Bashar Assad, have immense differences with Saudi Arabia, other Arab states, the United States and Europe over which opposition groups should be considered terrorists.

One dispute is over the groups Ahrar-as-Sham and Jaish al-Islam. Russia and Syria consider terrorists; Saudi Arabia, the United States and others view as legitimate opposition groups.

Iranian Foreign Minister Mohammad Javad Zarif said Thursday that only three groups are now on the terrorist list: the Islamic State group, al-Qaida-affiliate al-Nusra and al-Qaida itself. Those groups had been identified as terrorist organizations from the start of the international process to get the peace talks started, meaning consensus on any others remains elusive.

Kerry is due to visit Saudi Arabia this weekend to pursue the matter.

At their meeting, Kerry and Netanyahu tried to play down tensions that have flared between the United States and Israel recently over the implementation of the Iran nuclear deal and U.S. criticism of Israeli policy in the West Bank.

Netanyahu's office responded angrily to criticism of Israeli settlements raised on Monday in a speech by the U.S. ambassador to Israel, saying it was "unacceptable and untrue" as well as inappropriate at a time of heightened violence with the Palestinians.

Netanyahu brushed aside the concerns, saying "My biggest concern is having time to talk to my friend, John Kerry."