Karzai says immunity for US troops is up to Afghan elders 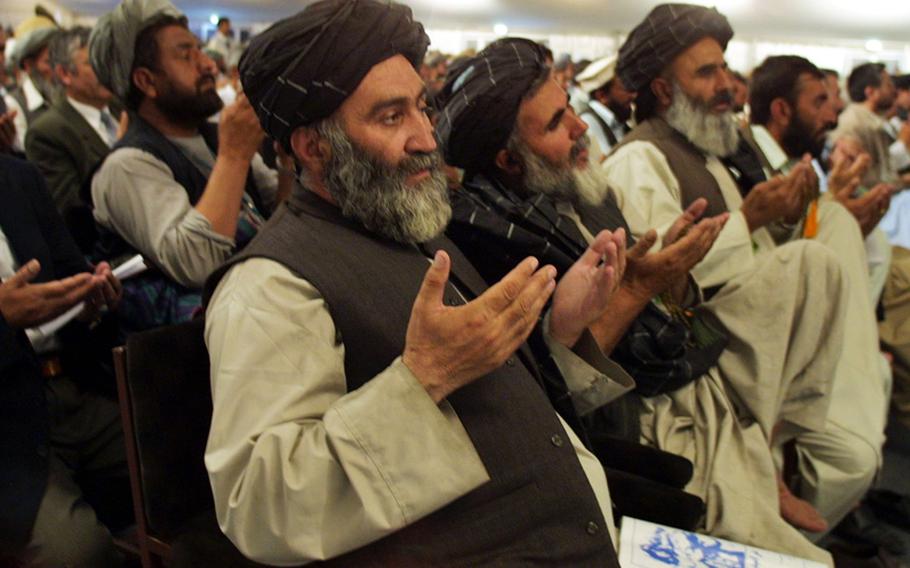 In a June 11, 2002 photo, delegates pray during the opening session of the Loya Jirga in Kabul, Afghanistan (MCT file photo)

WASHINGTON &mdash; Although the White House last week raised the possibility of a complete pullout of U.S. troops from Afghanistan after 2014, both sides are seriously negotiating to keep some American troops in the country, Afghanistan&rsquo;s ambassador to the United States said Monday.

Meanwhile, in his first public remarks after returning to Afghanistan after meetings with U.S. leaders last week in Washington, President Hamid Karzai said Monday that a convention of national elders known as a &ldquo;loya jirga&rdquo; should decide on a key component of the negotiations &mdash; immunity from Afghan prosecution for U.S. troops who remain after the formal end of NATO&rsquo;s combat mission in December 2014.

President Barack Obama said Friday during a joint press conference with Karzai that he would not consider a U.S. troop presence to train Afghan forces and hunt al-Qaida without an immunity agreement. Failure to negotiate immunity led to a complete U.S. pullout from Iraq in 2011.

On Monday, Karzai told Afghans that his talks with Washington had gone well, but said the Afghan people had to decide on the status of U.S. troops in the country.

The last loya jirga was convened in November 2011 and approved a strategic partnership between Afghanistan and the United States.

Karzai said last week he believed that agreements reached to speed the handoff of security responsibility to Afghan troops and transfer Afghan prisoners would give him leverage with the Afghan people to argue for immunity.

A third round of U.S.-Afghan negotiations over a bilateral security agreement to provide the legal groundwork for a continued American troop presence will take place in late January, Eklil Hakimi, the Afghan ambassador to Washington, said Monday.

&ldquo;We have clarified our red lines, which is national sovereignty,&rdquo; Hakimi said. &ldquo;Our U.S. colleagues already specified their red lines &mdash; that is the protection of U.S. forces &hellip; which is understandable to us.&rdquo;