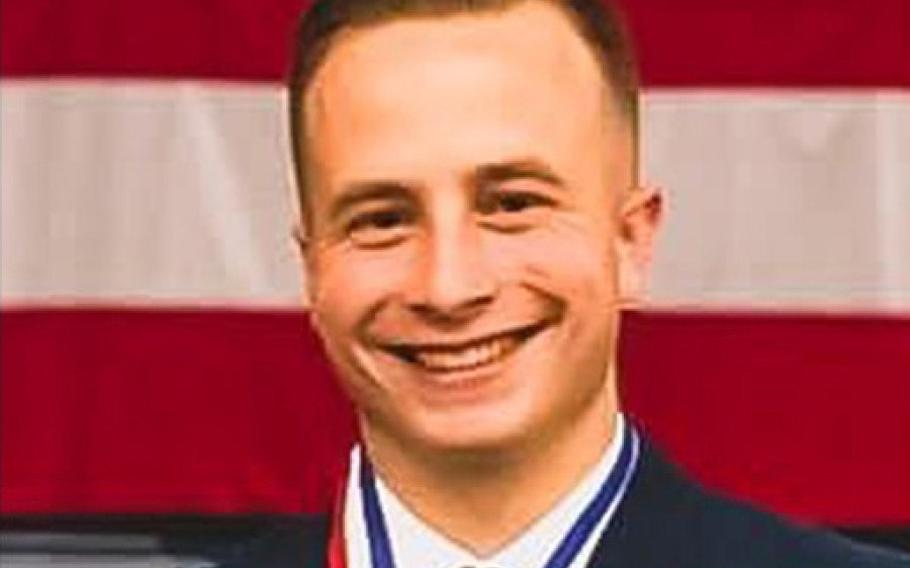 WASHINGTON — Speed and lack of protective gear during a “joyride” of a vehicle led to the rollover death in September of an Air Force reservist in Kuwait, according to an investigation released Tuesday.

Staff Sgt. Ronald J. Ouellette, 23, of Merrimack, N.H., died Sept. 14 when the single all-terrain vehicle in which he was a passenger rolled and pinned him to the ground in a cargo yard near the flight line at Ali Al Salem Air Base. His home unit was the 42nd Aerial Port Squadron out of Westover Air Reserve Base in Massachusetts. During his deployment to Kuwait, he was assigned to the 386th Expeditionary Logistics Readiness Squadron at the base.

An investigation into the accident found Ouellette and the driver, another Air Force staff sergeant, were not wearing seatbelts, helmets, eye protection or long-sleeved shirts as required at the time of the accident. The report, written by Air Force Brig. Gen. Max Stitzer, who presided over the Ground Accident Investigation Board that investigated the incident, also stated they were driving at a high rate of speed when the driver lost control while making a sharp turn that caused the vehicle to tip over, killing Ouellette. The vehicle in which they were driving was actually cargo that had been parked in the yard and was not part of their squadron’s equipment.

The incident happened two days after another fatal rollover at the Kuwaiti base killed 26-year-old Senior Airman Jason Khai Phan. He was on a security patrol in a Mine-Resistant Ambush Protected All-Terrain Vehicle, or M-ATV, when the vehicle rolled, ejecting him. None of the three Air Force Security Forces airmen in the vehicle were wearing helmets or seatbelts, according to the report released last week.

The base is used for receiving and distributing equipment and personnel in support of U.S. Central Command operations, including Operations Inherent Resolve in Iraq and Syria and Freedom’s Sentinel in Afghanistan.

A day prior to the Sept. 14 accident, the vehicle — an Army Polaris Ranger ATV — was off loaded as cargo from a C-17 Globemaster transport aircraft and parked in a cargo yard before being delivered to a unit within the U.S. Central Command area of responsibility, according to the report.

On Sept. 14, Ouellette and the other Air Force staff sergeant, who was not named in the report, were moving cargo that had been delivered from a C-17 Globemaster transport aircraft. They parked the cargo, a Jeep Cherokee and a large recovery vehicle or “wrecker,” in the cargo yard near the flight line where the ATV was also parked. Ouellette then got into the front passenger side of the ATV while the other airman got into the driver’s side to drive a lap around the yard.

The driver lost control of the vehicle on the sandy surface while making a sharp left-hand turn around a row of cargo pallets. The driver was able to jump out of the vehicle through its roll cage while it rolled onto the passenger side. He suffered minor injuries. Ouellette was pinned underneath the cage and it was determined later that he died instantly due to blunt force injuries to his head, according to the report.

The driver said he had taken his foot off the gas before the turn and he does not remember using the brake, according to the report. He also said he believes he was going about 15 miles per hour at the time, when the speed limit was 5 miles per hour for the cargo yard. But investigators concluded the driver likely slammed on the breaks while the vehicle was traveling between 25 to 35 miles per hour, causing the vehicle to drift while he attempted to turn it at 180 degrees.

When security forces arrived, the driver was visibly upset and told them that he and Ouellette were “just out joy-riding” and they had “hit the turn too hard” prior to the accident, according to the report.

An investigator spoke with a supervisor after the accident who said it was not uncommon for personnel to drive equipment around “for a ride” when possible.

The day before the accident, the driver had used the ATV as part of his duties and noticed it was “sputtering.” The driver later said he was driving the vehicle on Sept. 14 in order to troubleshoot the problem. The mechanical problem was never reported as required and maintenance was outside the driver’s responsibility, according to the report. The investigators did find the vehicle was overdue for scheduled maintenance.

The report as stated neither the first responders nor the driver’s supervisors made certain that the required paperwork were completed following the accident. The driver was also able to leave the scene to go to a medical clinic before talking with an investigator and he was able to return to the United States shortly after the crash without being interviewed by the investigator, the report states.

The report also stated personnel in the unit were given safety briefings upon their arrival at the base, according to leadership. However, there was no documentation to prove that they had completed or attended the briefing, including Ouellette and the driver.

Stitzer wrote in the report that because the vehicle was not being driven as part of an official purpose, its operation was considered a misuse of the vehicle by the driver.

The investigation report is not meant to determine legal or disciplinary actions of airmen, Christopher Herbert, a spokesman for Air Mobility Command, wrote in an email Tuesday. However, the findings can be used by the chain of command to determine appropriate actions, he said.