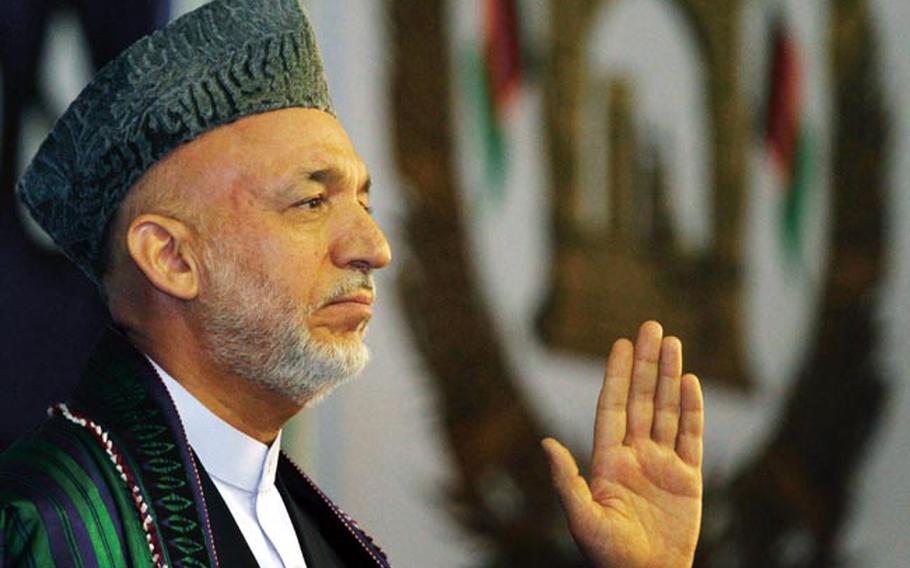 KABUL &mdash; A three-day Afghan peace conference ended Friday with a broad resolution supporting negotiations with insurgents but few concrete proposals to overcome the issues at the center of the country&rsquo;s long-running conflict.

The assembly, or jirga, presented a 16-point resolution to the government following two days of talks, recommending the removal of the Taliban from international &ldquo;black lists&rdquo; and calling for a limited prisoner release as a gesture of goodwill. The jirga also suggested establishing provincial commissions to pursue talks with local insurgents.

The nonbinding resolution steered well clear of controversial subjects likely to be at the heart of any future peace talks &mdash; such as how to appeal to Taliban leaders who have refused government offers to negotiate.

Critics said the conference accomplished little and largely represented a showpiece effort by Karzai to re-establish his standing after tainted presidential elections.

&ldquo;It was a bit of public posturing for the international community, in particular, but also for Afghans to show who was in control,&rdquo; said Tazreena Sajjad, a political scientist who is completing a report on Afghan reconciliation and reintegration for the Afghanistan Research and Evaluation Unit, a policy research institute in Kabul.

&ldquo;I certainly sense there was a lot of ground for cynical analysis of what happened in the jirga,&rdquo; said Sajjad, who spent years in Afghanistan and was reached Friday in Washington. &ldquo;It wasn&rsquo;t meant to be controversial, and that was the outcome.&rdquo;

Government officials said the jirga, which drew about 1,500 delegates from across the country, established new momentum behind the push for peace.

&ldquo;This is a great show of the strength of the Afghan people and will definitely give this whole process a new energy,&rdquo; said Wahid Omar, a spokesman for President Hamid Karzai.

Still, the resolution stuck to subjects on which there was broad consensus, calling for the strengthening of Afghan security forces, international pressure against meddling in Afghan affairs by neighboring countries and better management of reconstruction projects.

In what could assuage concerns that the jirga would weaken women&rsquo;s rights in favor of the stricter interpretation of Islamic law favored by the Taliban and other hard-liners, the resolution also called for gender and ethnic equality.

Several of the key recommendations were vague. The resolution did not clarify whether the call to release detainees not convicted of crimes referred to people held by the U.S. or those in Afghan custody. Education Minister Farouk Wardak, the chief organizer of the jirga, said it related to both and that the government would begin implementing the release immediately. Omar, the presidential spokesman, said the government had only just received the recommendations and would have to study them.

In brief remarks concluding the jirga, Karzai specifically cited the call to release detainees and said he would &ldquo;work on it.&rdquo;

The call to remove some insurgent leaders from U.S. and United Nations sanctions lists, a Taliban demand, is also likely to prove relatively noncontroversial. The UN has already removed some names from the lists.

Organizers said the final recommendations of the jirga were drawn from ideas discussed during small group sessions on Thursday. The 28 working groups presented their thoughts Friday morning. Many called for releasing prisoners against whom there was no compelling evidence.

Not all the ideas presented by the groups made the final cut. The chairman of one called for an investigation into U.S. support for the Taliban, reflecting a widely believed conspiracy theory that the U.S. secretly bolsters insurgents as part of a bid to justify a continued presence in Afghanistan.

Sajjad said concrete talks on reconciliation would have resonated more clearly with average Afghans but would have been fraught with controversy. They also would have been moot since the Taliban and other insurgent groups were not present at the jirga, she said.

&ldquo;They are obviously perceiving themselves as strong,&rdquo; Sajjad said. &ldquo;It&rsquo;s very premature to be talking about reconciling with the Taliban when the government is in a position of weakness.&rdquo;

It remains to be seen how the jirga will be remembered by a skeptical Afghan public.

Haji Anayah Ullah, a Kabul taxi driver, said he was not impressed.

&ldquo;They held a jirga just like this 22 years ago, and we&rsquo;ve had war ever since then,&rdquo; he said. Referring to the closure of streets around the site of the jirga this week, Ullah added, &ldquo;At least 22 years ago they didn&rsquo;t interfere with the taxi drivers.&rdquo;