Israeli leader calls on world to condemn arson of synagogue 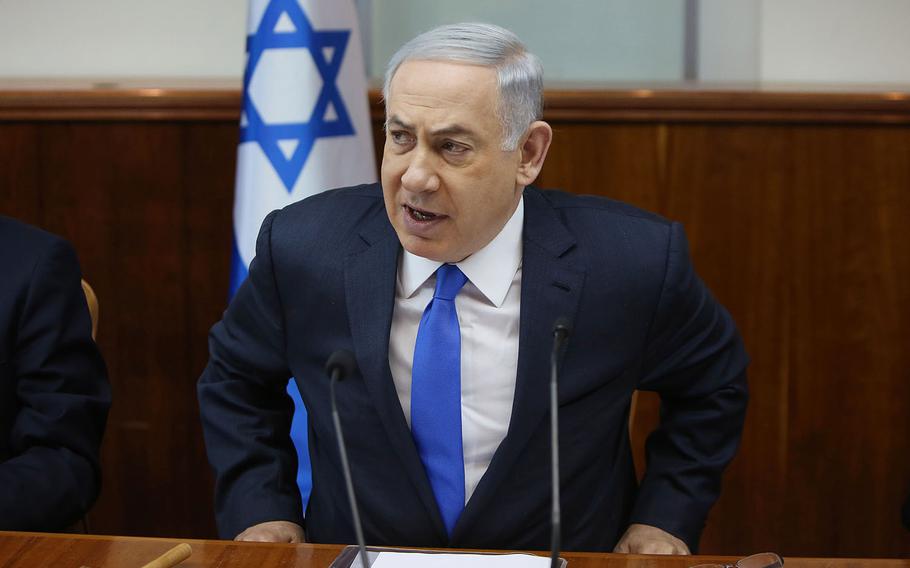 JERUSALEM — Israeli Prime Minister Benjamin Netanyahu on Sunday called on the world to condemn a suspected arson attack against a makeshift synagogue in the West Bank where Jewish Torah scrolls were burned.

The scrolls were stored inside a tent that was used as a synagogue near a West Bank outpost that overlooked the site where the bodies of three Jewish teenagers were found in June 2014. Their abduction and murder was carried out by Palestinians said by Israel to be members of the militant group Hamas and set off a series of events that ultimately led to that summer's 50-day war in Gaza.

Netanyahu said this weekend's desecration of the makeshift synagogue that was named after the teenagers was a result of the type of Palestinian incitement that has fed the current five-month-long wave of Palestinian violence.

"We will do everything to find who did this and bring them to justice but I expect all those, here and around the world, who justifiably condemn any desecration of a mosque ... to equally cry out about this heinous act," he said at the start of his weekly Cabinet meeting.

Israel has been coping for years with vandalism attacks against mosques and churches that have been blamed on Jewish extremists. But attacks on synagogues have been rare.

The Anti-Defamation League, a U.S. group that battles anti-Semitism worldwide, called the incident "an act of anti-Semitism." Education Minister Naftali Bennett said that "the images of burnt holy books in a synagogue are taken straight out of the darkest nights of our people's history."

The suspected attack comes amid five months of near-daily Palestinian assaults, mainly stabbings, against Israeli civilians and security personnel that have killed 27 Israelis. Some 155 Palestinians, the majority of whom Israel says were attackers, were killed by Israeli fire during that time. The rest died in clashes with Israeli security forces.

Israel says the violence is fueled by a campaign of Palestinian incitement. Palestinians say it stems from frustration at decades of occupation.

The violence continued Sunday with an Israeli soldier stabbed in the south of the country and his attacker shot dead.

Police spokeswoman Luba Samri said the soldier was standing near the central bus station in the southern city of Ashkelon when he was stabbed in his torso and lightly wounded. The stabber was shot and apprehended. He later died of his wounds. Police said the stabber was a Sudanese foreign national but they still believe the attack to be politically motivated.