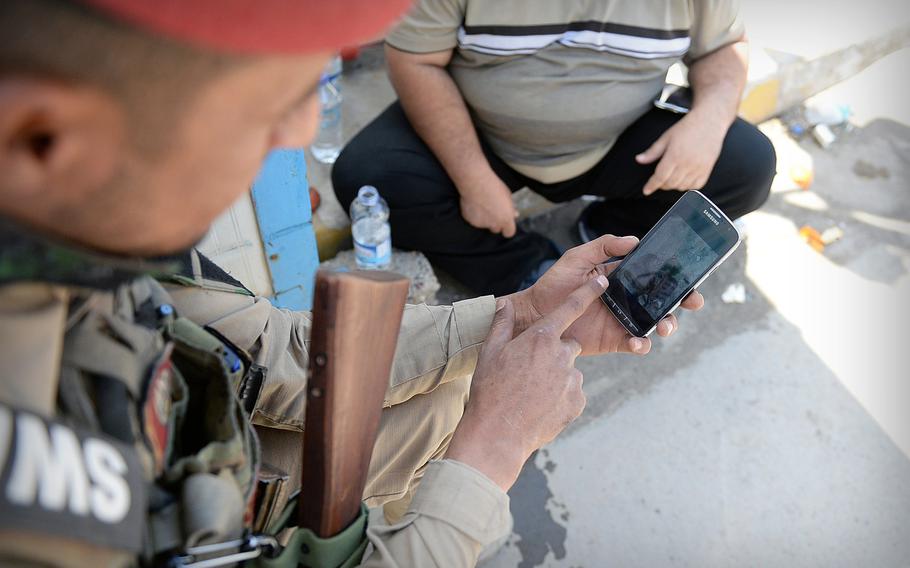 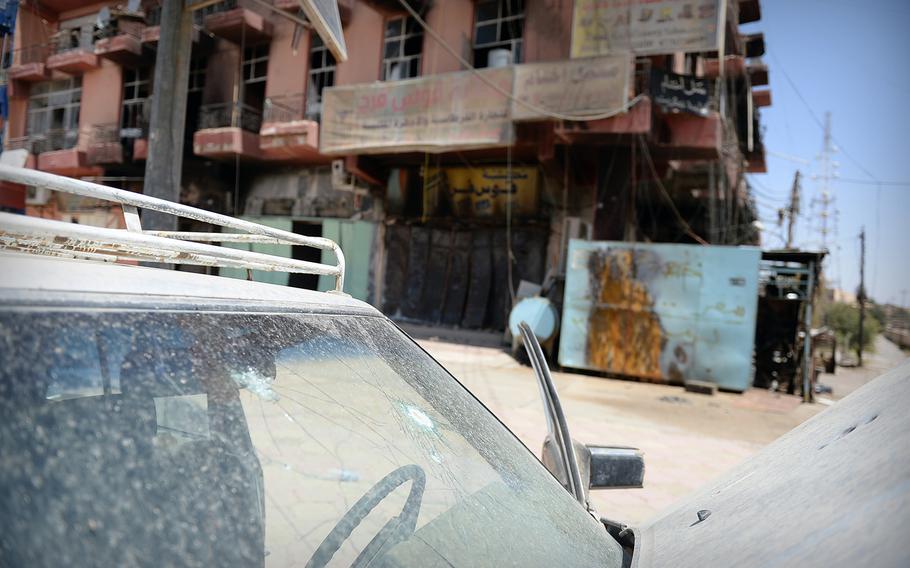 Buy Photo
A bullet-damaged car sits in front of buildings burned and looted in downtown Tikrit, Iraq. The city sustained nearly a year of occupation by the Islamic State, then faced looting and other abuse by some liberators with the Iraqi security forces. (Josh Smith/Stars and Stripes) 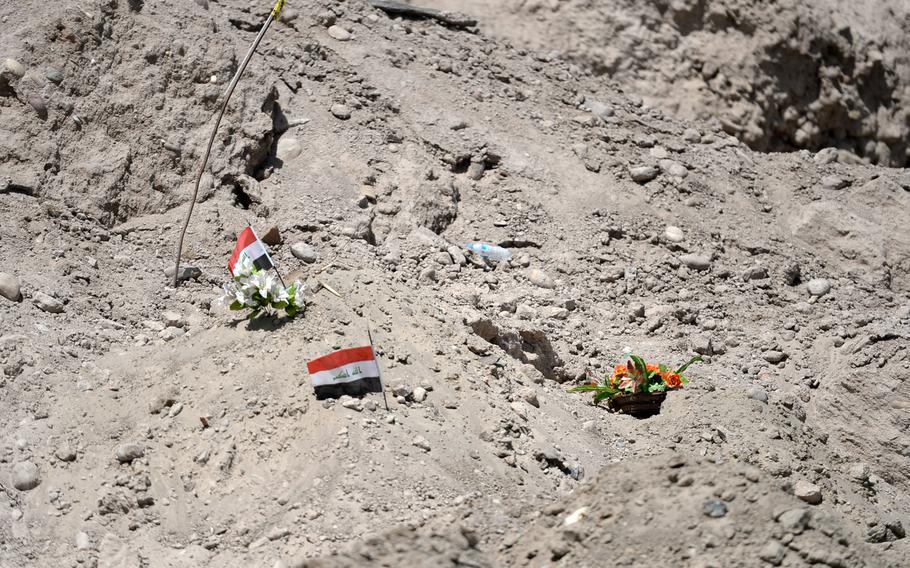 Buy Photo
Flags and flowers mark the location of one of 13 mass graves found around Tikrit, Iraq. Islamic State militants massacred an estimated 1,700 people before burying or throwing their bodies in a river. (Josh Smith/Stars and Stripes) 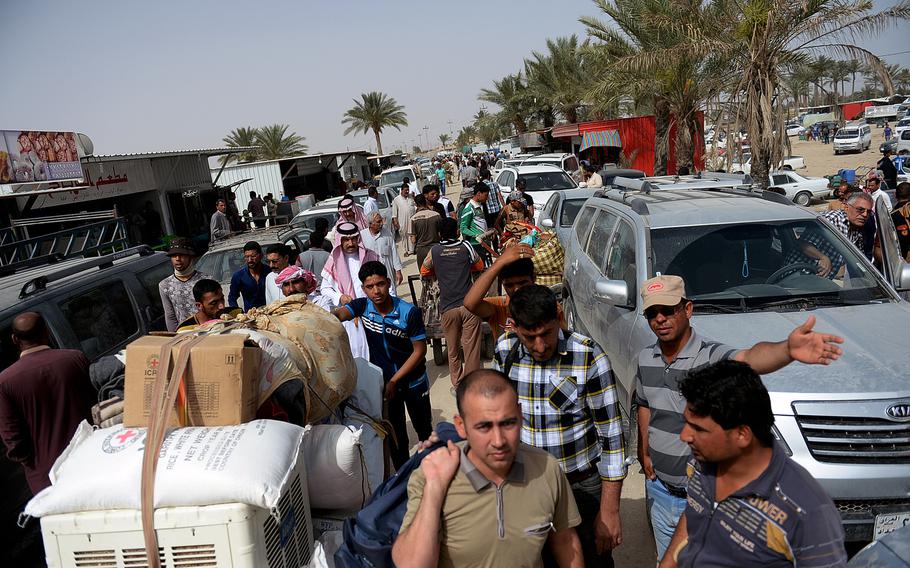 Buy Photo
Thousands of people flee fighting between Iraqi forces and the Islamic State in Anbar province, Iraq, in April 2015. Fear of the group's brutality sent tens of thousands of people seeking safety in Baghdad and other areas. (Josh Smith/Stars and Stripes) 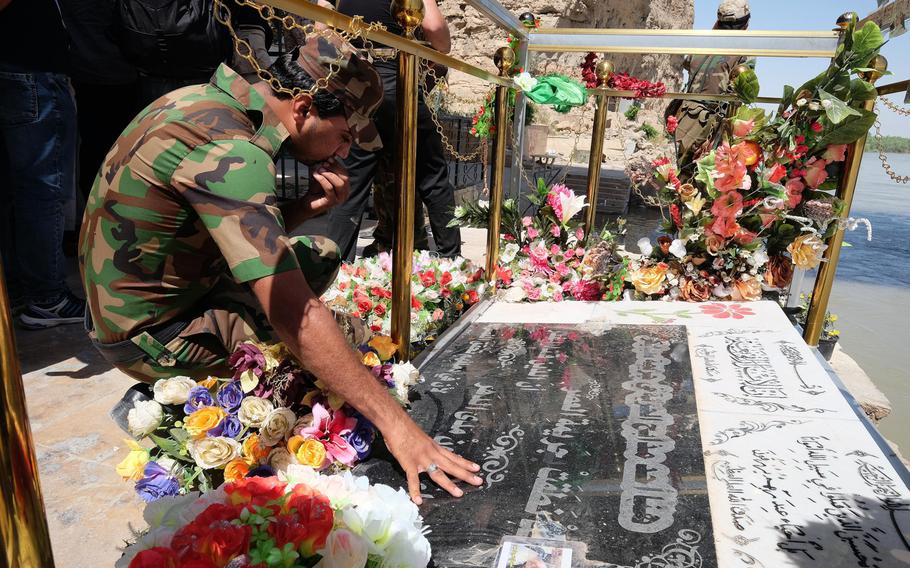 Buy Photo
A member of the Iraqi security forces mourns friends killed by Islamic State fighters after they captured Tikrit in 2014. Hundreds of young men, mostly cadets from a nearby military academy, were shot and thrown into the river at this location. (Josh Smith/Stars and Stripes) 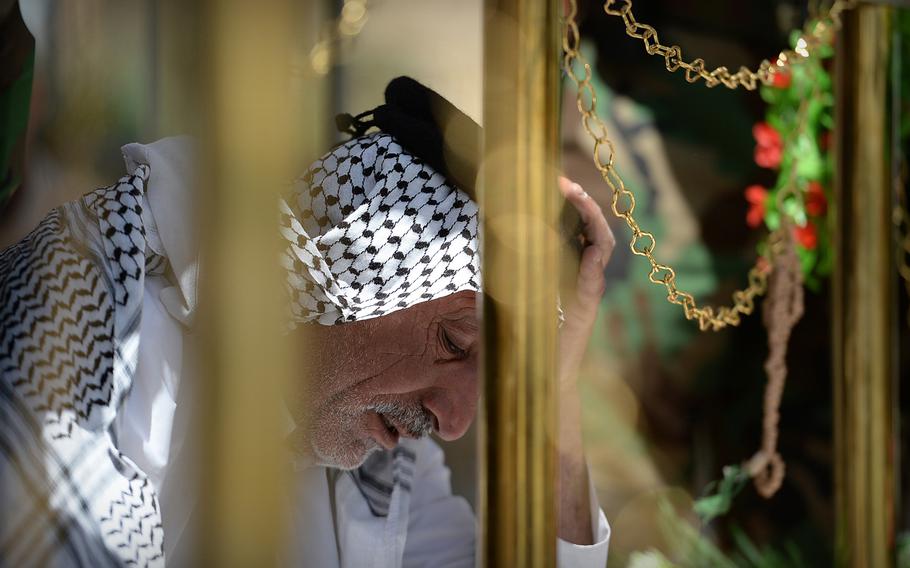 Buy Photo
A man mourns for relatives executed by Islamic State fighters at a palace in Tikrit, Iraq. "They kill men, women, and children," he said. "That's not Islam. They must all be killed." (Josh Smith/Stars and Stripes) 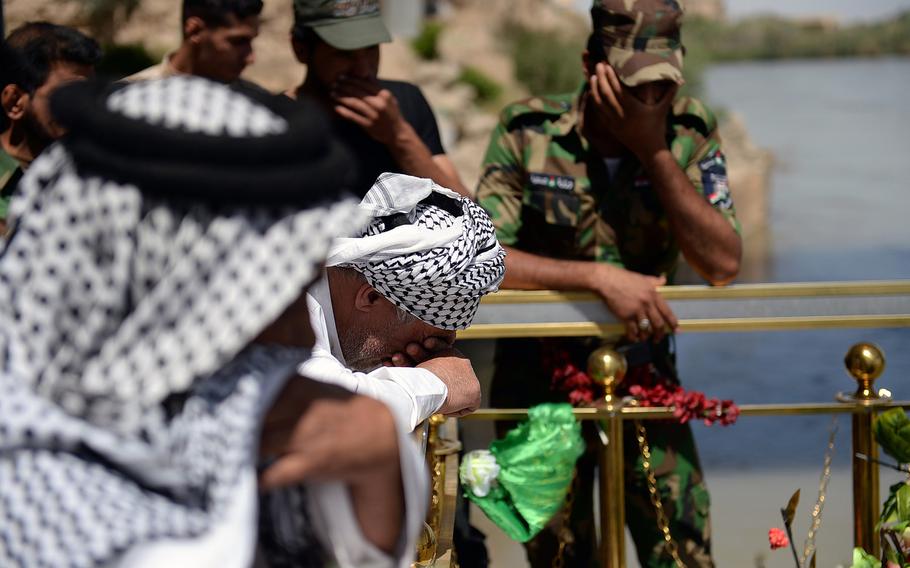 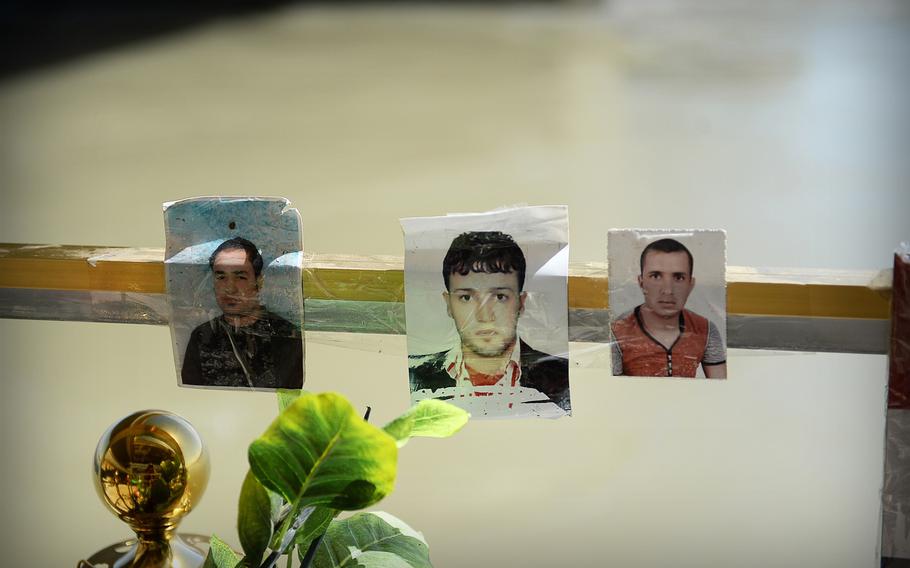 Buy Photo
Photos of victims are placed at a memorial for hundreds of young Iraqi men executed by the Islamic State along the Tigris River in Tikrit. (Josh Smith/Stars and Stripes) Buy Photo
A member of the Iraqi security examines the black blood stains from victims killed by Islamic State fighters after they captured Tikrit in 2014. Hundreds of young men, mostly cadets from a nearby military academy, were shot and thrown into the river at this location. (Josh Smith/Stars and Stripes)

TIKRIT, Iraq — This city is a ghost town. Weeks after pro-government forces took back Saddam Hussein’s hometown from Islamic State militants, the streets remain deserted. Most of the population fled during the town’s occupation in the months thereafter and haven’t been allowed to return.

Squatting amid the burned and looted buildings last week a Tikrit police officer swiped through photos on his smartphone. He said his name was Ahmed, a 31-year-old father of two, who wouldn’t give his last name for fear of reprisals.

His fear is understandable. Fighters with the Islamic State group, also known as ISIS, kidnapped and killed many of his extended family there to try to force him to defect. They sought his military expertise, partly gained in American advising programs years ago. He said that as far as he knows, the militants are still holding his wife and children.

Ahmed’s fear has been subsumed by a deadly resolve.

Gruesome images fill his phone’s screen. He stopped at a photo of two severed heads in a cooking pot. “I killed them myself,” he said, slashing his finger across his throat. “They took my family. So I took their heads. I won’t give up until they are all dead.”

Such sentiments are expressed by Iraqis — both Sunnis and Shiites — from the front lines to the strongholds of Baghdad.

Atrocities committed by the militants spread fear through Iraq and among its Western backers as the group swept out of neighboring Syria last year and occupied wide swathes of the country. As Iraqi forces gradually liberate more areas from the Islamic State, the destruction and death left in its wake are steeling their resolve.

But the thirst for revenge threatens to make the conflict even deadlier, as everyone from government troops and militias to victims’ relatives look to right wrongs that can never be forgotten.

River of bloodIt’s impossible to take a step in Tikrit without sending empty shell casings skidding across the ground.

Occasionally, the silence is broken as a convoy of military vehicles clad in handmade armor and covered with apocalyptic paint jobs careens through the streets of Saddam Hussein’s hometown with loads of masked gunmen. Sporadic gunfire in the distance serves as a reminder that Islamic State snipers are still holed up in some neighborhoods.

Perhaps the most ghastly scenes are on the grounds of what was Saddam’s lavish palace. The palace — actually a complex of palaces complete with its own man-made lake — sits on the bank of the Tigris River, a hundred miles north of Baghdad.

It was on the edge of that river that fighters from the Islamic State systematically murdered hundreds of young Iraqi men, shooting them and dumping their bodies one by one into the river until the water ran red. Elsewhere on the palace’s palm-shaded grounds, militants killed hundreds of others, burying the bodies in mass graves. In all, officials estimate that at least 1,700 people, mostly young cadets from a military academy at a former American air base, were slain after the militants seized control of Tikrit in June.

At the palace where the victims were slain, a memorial has been erected, decked with flowers and photos of the dead. Black bloodstains still tarnish the concrete at the water’s edge. Relatives and friends make pilgrimages here, escorted by victorious militiamen eager to draw attention to the Islamic State’s brutality.

“They kill men, women, and children,” said one man who lost relatives at the site. “That’s not Islam. They must all be killed.”

“I answered the call of the ayatollah and my nation to answer this injustice and repression,” said 25-year-old fighter Jabbar Sadiq. “We will have vengeance for these martyrs. We will be victorious or be martyrs ourselves.”

RetaliationThe atrocities committed by the Islamic State group have deeply shocked the world. Beheadings, crucifixions, abductions, mass executions, rape, selling of sex slaves, and recruiting child soldiers are just a few of the crimes that the religious fundamentalists have trumpeted online.

Many of the Islamic State’s victims have been minority ethnic and religious groups, while the group itself has recruited members almost exclusively from the Sunni community. Iraq’s majority Shiite population has also found itself squarely in the path of the group’s wrath. The victims in Tikrit were largely Shiites, mostly from the security services. But as Iraqi forces have regained ground in recent months, Shiite militias backed by Iran have been accused of abuses of their own.

“Sectarian militias have increased their influence on the battlefield and in Iraq’s government since ISIS captured Mosul in June 2014,” Human Rights Watch said in an April 13 statement. “The militias have routinely carried out abductions; summary executions, including beheadings; torture; and forcible displacements of thousands of families in areas recaptured from ISIS.”

United Nations investigators have chronicled a range of war crimes by both militants and Iraqi security forces.

“What really shocked me is that most of it is not news anymore,” the U.N.’s representative in Iraq, Nickolay Mladenov, said in February. “The world has gotten used to the violence and atrocities, and this should not be the case. We should stand up every occasion that we can.”

The increasingly sectarian nature of the conflict is complicating efforts by the U.S.-led coalition to support Iraqi forces.

Shiite paramilitary groups and government units have close ties to Iran, and after fighting against American troops during the Iraqi insurgency, often have little desire for any U.S. help. Sunni tribes, meanwhile, also fought their own insurgency against the Americans and are often face suspicions over alleged sympathies for the radicals.

Almost all of the paramilitary groups, which prefer the official title of Popular Mobilization Units, were pulled from Tikrit after some members were observed killing prisoners and looting and burning stores and houses.

In Amerli, a town about 50 miles from Tikrit, Human Rights Watch documented the widespread destruction of houses by paramilitaries after they pushed out Islamic State fighters.

Al-Ghanim said officials would investigate any claims but the probes often never get off the ground because of a common view that, since the Islamic State isn’t a country, laws of war don’t apply to the fight against the group.

“It is normal that (Iraqi forces) would want to kill any terrorists,” he told Stars and Stripes. “ISIS doesn’t submit to any international, national, or heavenly laws. So what rules should be followed when dealing with such a killing machine?”

Making listsIn a rented home in a quiet Baghdad neighborhood, Sheik Ghazi Saab al-Hardan has spent most of the last year compiling a list.

Al-Hardan and others from his family were displaced nearly a year ago when the Islamists stormed through their villages in Anbar province. He lost his property and about $4 million in the process. As members of Sunni tribes that dared to oppose the invaders, many Anbar residents who didn’t get away faced mass executions. Since then, al-Hardan has been collecting intelligence from friends and followers who stayed behind. Some of that intelligence he passes on to local Anbar officials. Other information he uses to build lists of suspected Islamic State sympathizers.

“The day will come when we return,” he said.

Al-Hardan becomes coy when asked what he plans to do with the list of people he suspects of supporting the militants. He doesn’t rule out handing them over to officials, but said waiting for formal punishment may take too long.

“Their punishment depends on how much they hurt other people,” he said. “It’s not easy to hold back and wait for the law to take action.”

For Iraqi and international leaders, the challenge is to channel the anger toward Islamic State into defeating the group and undermining its ideological appeal.

In a hopeful sign, a few Sunni fighters joined Shiite groups to help retake Tikrit. And after previously opposing the deployment of militias to Sunni areas in Anbar, Sunni leaders there voiced support for the units.

“Since the 2003 invasion, a simple truth has become clear: Vengeance leads to nothing but violence and only splits the country,” al-Ghanim said. “It’s not possible to exclude groups if you want to build a country. ISIS can unite people in a common enemy. The Iraqi people have already achieved victories that would have been impossible if done alone.”

Wael al-Hafoth contributed to this report.