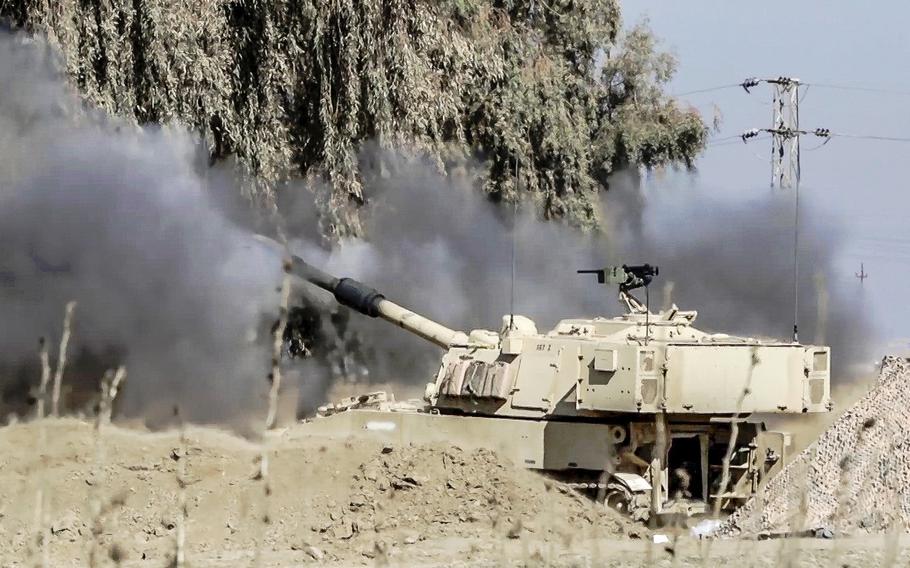 Rounds from an M109A6 Paladin are fired from a tactical assembly area to support an Iraqi security forces' offensive in West Mosul, Iraq, on Feb. 19, 2017. Iraqi forces on Thursday, May 4, began a new push into western Mosul, attempting to bring fresh momentum to the fight to retake Iraq’s second-largest city from the Islamic State group. (Jason Hull/U.S. Army)

The Iraqi army’s 9th Armored Division and the Interior Ministry’s elite Rapid-Response Division have opened the new front in the city’s northwest, where militants are holding neighborhoods, the Defense Ministry said in a statement.

The move is part of a wider effort to overwhelm the militants by attacking on multiple fronts. A similar strategy was used to clear the half of Mosul east of the Tigris River, which was declared fully liberated in late January after about three months of fighting.

In the western half, where an offensive began in late February, the 9th Armored Division — supported by U.S. advisers, intelligence and precision strikes — swooped wide of the city to block the militants’ main escape routes to Syria, recapturing the village of Badoush, before turning toward Mosul.

Meanwhile, the bulk of the Iraqi force, including the elite, U.S.-trained Counter-Terrorism Service and federal police units, advanced from the city’s southern outskirts. That assault bogged down in the dense urban terrain, where hundreds of thousands of civilians remain trapped by the fighting.

“This area’s very difficult,” Iraqi Maj. Gen. Najm al-Jabouri told Stars and Stripes in an interview last month. At that time, government forces made incremental gains in Mosul’s Old City, approaching the Grand Mosque, where in a rare public appearance in July 2014, ISIS leader Abu Bakr al-Baghdadi declared the group’s self-styled caliphate after it had occupied almost a third of Iraq.

Al-Baghdadi is believed to have fled the city, but Iraqi forces have only inched toward their goal of retaking the symbolic mosque and raising their country’s flag since closing to within a few hundred yards of it in late March.

Since then, a highly publicized surge in civilian casualties, likely the result of increasing U.S. airstrikes coupled with ISIS’s broadened use of human shields, has slowed the Iraqi momentum.

U.S. officials have said the Iraqis are reluctant to advance farther without the international coalition’s surveillance and air support to spot and soften up ISIS defenses ahead of them. Al-Jabouri, who returned to Iraq in 2015 from the United States to help lead the counter-ISIS fight, said that militants were concentrated mainly in the city’s southern sector and that a new push from the north could swiftly collapse their defenses.

Iraqi officials have since said the battle would be over by the end of May, though some military observers remain skeptical it will be completed before late summer.

Iraqi forces say they’re trying to clear remaining civilians from the Old City, a district of narrow streets, to help simplify and accelerate the battle. Brig. Gen. John B. Richardson IV, a top U.S. commander in northern Iraq, has said officials fear the longer the battle drags on, the deadlier it will become, especially for civilians.

More than 8,000 noncombatants have been killed and wounded since the fight for Mosul began last October, according a United Nations count. More than 400,000 have fled the violence.

The Iraqi government does not release casualty figures for its forces, but Army Gen. Joseph Votel, head of U.S. Central Command, said in congressional testimony in March that more than 770 Iraqi troops had been killed and 4,600 wounded.