Iraq reinforcements to bring US troops closer to frontlines 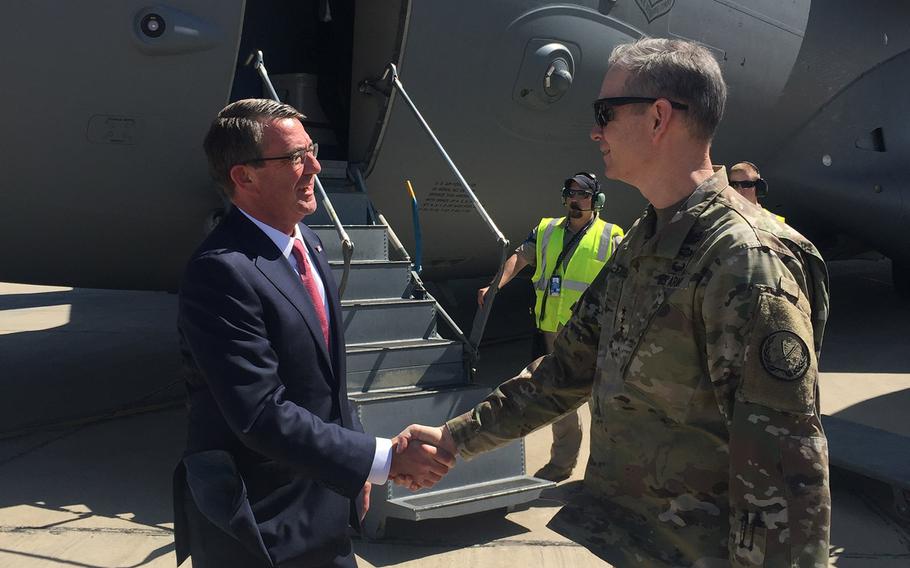 Secretary of Defense Ash Carter is greeted by Lt. Gen. Sean MacFarland as he arrives in Baghdad, Monday, April 18, 2016. Carter announced the U.S. will send Apache helicopters and more than 200 additional troops to aid in the fight for Mosul. (Tara Copp/Stars and Stripes)

BAGHDAD — The U.S. military will send Apache attack helicopters and additional troops to assist the Iraqi army in the fight to retake the city of Mosul from the Islamic State group, Defense Secretary Ash Carter announced Monday.

The additional forces are being deployed “to make sure the defeat of [the Islamic State] is lasting,” Carter said during a visit with U.S. troops at Baghdad’s International Airport.

The additional 217 troops will include advisers, force protection, logistical support and aviation support for the Apaches, said a senior defense official, who spoke on the condition of anonymity but briefed reporters prior to Carter’s announcement.

Most of the advisers are expected to be special forces operators who will work with smaller-sized units then they had previously to provide tactical guidance as the Iraqi army’s 15th Division advances toward Mosul. This means U.S. advisers will embed with brigades and battalions and now serve closer to the front lines.

As the Iraqi units move toward Mosul, the U.S. advisers will move with them, Carter said.

“This will put Americans closer to the action,” he said.

The additional U.S. military support announced Monday is intended to help accelerate the fight for Mosul, Iraq’s second largest city, the senior defense official said. There are about 5,000 Islamic State fighters in Mosul, said Col. Steve Warren, the Baghdad-based spokesman for Operation Inherent Resolve. The terrorist group captured the city in summer 2014 and uses it as its de facto headquarters.

Carter arrived in Baghdad on Monday to meet with U.S. military and Iraqi political leaders, including Lt. Gen. Sean MacFarland, the U.S. commander of the coalition campaign against the Islamic State, Iraqi Prime Minister Haider al-Abadi and Defense Minister Khaled al-Obeidi. Carter also held a conference call with Massoud Barzani, the president of the self-ruled Kurdish region in the north, or Kurdistan.

The additional 217 troops are the latest in a series of incremental additions to the U.S. military effort in Iraq. MacFarland left the door open to the possibility that even more U.S. troops would be sent to Iraq if the new additional forces prove "insufficient" to defeating the Islamic State group in Mosul. If that happens, "we'll have another discussion about it," he said.

Carter said the Apaches will be an important addition to the fight as Iraqi forces with U.S. advisers work to surround Mosul in advance of the battle to retake the city.

Eight Apaches would be available to assist the Iraqis, according to a senior defense official who spoke to the Associated Press on the condition of anonymity.

Carter said as Iraqi forces and U.S. advisers advance, the Apaches could be used for overhead cover and to react quickly to observed threats.

“We expect there will be a lot of such opportunities as the envelopment of Mosul progresses,” he said.

Al-Abadi had initially rejected the United States' offer to provide Apaches late last year as Iraqi Security Forces fought to retake Ramadi. But with the more complex fight ahead for Mosul, Carter said Abadi “understood [the Apaches’] capability perfectly well and he understood that it would be necessary in just these cases and agreed with me that we would provide it.”

The additional troops will bring the U.S. force in Iraq to 4,087 servicemembers, a U.S. official said. The total does not include another estimated 1,000 U.S. troops who are in the country but are not part of the Pentagon’s official count, including special operations forces, some logisticians, troops on temporary duty and forces who are rotating in to replace departing forces.

About 5,000 troops from the Iraqi army’s 15th Division are operating in the 70-mile swath between Makhmour and Mosul, as Iraqis work with U.S. Marines to clear villages south of Mosul. The Marines are supporting the Iraqis out of an artillery base near Makhmour called Firebase Bell. The base has already come under attack by Islamic State fighters, causing the death of Staff Sgt. Louis Cardin and injuring eight other Marines.

It was Carter’s third trip to Baghdad since he became defense secretary. It took place just days before President Barack Obama’s scheduled arrival in Saudi Arabia to discuss what additional military, political and economic support the United States and its Gulf Arab allies can provide Iraq.

Iraq is struggling with low oil prices and a political crisis that threatens to weaken its army’s attempt to retake Mosul.

While Carter did not meet with Barzani, he announced the United States would provide $415 million to help support “selected peshmerga units,” referring to security forces controlled by the Kurdish autonomous government. Carter didn’t elaborate on the plan, but the Kurds have complained they were getting short-changed in weapons and ammunition by the Iraqi central government in Baghdad.