Iran releases US sailors one day after detention at Farsi Island 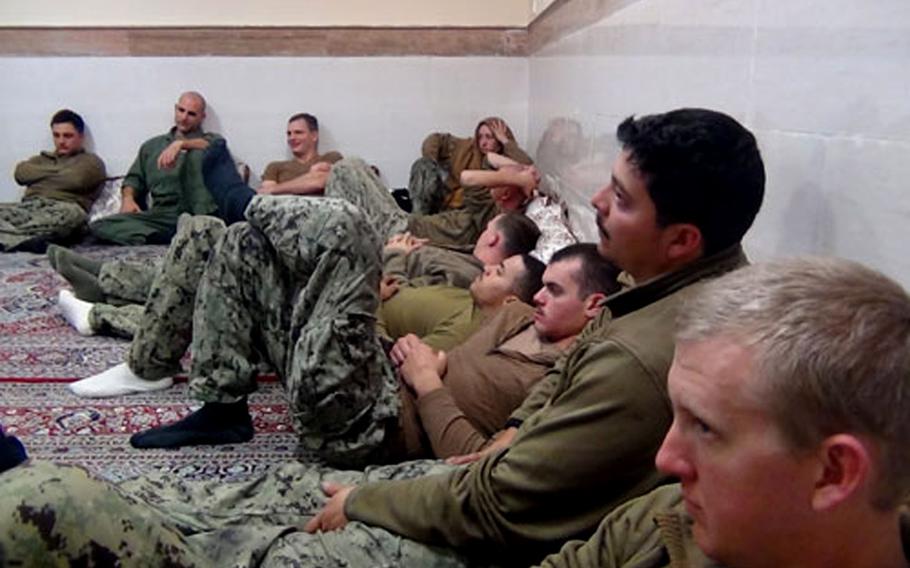 This picture released by the Iranian Revolutionary Guards on Wednesday, Jan. 13, 2016, shows detained American Navy sailors in an undisclosed location in Iran. All 10 of the sailors have been freed. (Sepahnews/AP)

WASHINGTON — Ten U.S. sailors were released early Wednesday by Iranian authorities after being detained for less than 24 hours in what was described as an unintentional entry into Iran’s territorial waters in the Persian Gulf.

The crews of the two U.S. riverine command boats – small shallow-water patrol craft with minimal technology or defenses on board – were detained Tuesday after a mechanical failure caused the boats to drift into Iran’s territorial waters near Farsi Island, U.S. defense officials said. There were nine male sailors and one female sailor on board the vessels.

What could have become a tense international incident instead was quickly resolved through U.S. and Iranian diplomacy, a sign of what’s at stake in the Persian Gulf, said retired Navy Cmdr. Chris Harmer, a senior naval analyst with the Institute for the Study of War. Harmer, a former Navy helicopter pilot, deployed many times to the Persian Gulf and was assigned to various U.S. aircraft carriers, destroyers and cruisers there during his 20-year military career.

“I think the real interesting question here is, ‘What is the internal state of play in terms of the hardliners in Iran versus the moderates? I thought there was a real possibility Iran would hold the sailors longer, but it seems the senior Iranian leadership told the [Islamic Revolutionary Guard Corps] who had the U.S. sailors, ‘You are going to release these guys right now.’”

Farsi Island is used as a base for Iran’s Islamic Revolutionary Guard Corps-Navy, which is part of the 150,000-strong Islamic Revolutionary Guard Corps’ ground, air and naval forces. The hardliner group was formed in 1979 to protect the Islamic Republic and is loyal to Supreme Leader Ayatollah Ali Khamenei, as opposed to Iran’s regular armed forces, which report to Iranian president Hassan Rouhani, according to the Council on Foreign Relations.

Harmer said the Islamic Revolutionary Guard Corps-Navy is responsible for patrolling the Persian Gulf, whereas Iran’s regular Navy patrols outside the Gulf.

The release also comes just days before the International Atomic Energy Agency is expected to verify that Iran has fulfilled the terms of last year’s nuclear deal with the United States, which lifts numerous sanctions worth billions of dollars off Iran’s financial, shipbuilding, software, automobile and oil industries. In exchange, Iran must cease its development of enriched uranium, used to make nuclear weapons, and sharply curtail other aspects of its nuclear research.

In a statement on the sailors’ release, the Iranian Revolutionary Guard Corps said the United States apologized for the incident. However, John Kirby, a State Department spokesman, said reports of an apology were false.

The sailors were detained after at least one of the vessels experienced mechanical problems and their vessels floated within the 12-mile radius of Iranian territorial waters near Farsi Island in the middle of the Persian Gulf. However, the Navy said later that it was still not clear what caused the boats to become disabled.

When the Navy confirmed the boats were at Farsi Island, it turned to the State Department to negotiate their release.

The Navy stated in a news release that after Iran released the boats, the crews met U.S. Navy aircraft, which took them ashore. New crews were swapped onto the two boats, which continued on to Bahrain, the original destination.

The quick release of the U.S. sailors was a far different scenario than in 2007, when the Islamic Revolutionary Guard Corps-Navy detained 15 British sailors and held them for 13 days at the height of the Iraq War.

The promise of opened markets for Iran “plays a lot” into Wednesday’s quick resolution, but it doesn’t mean that Iran isn’t still looking for a reason to engage in war with the United States, Harmer said.

“My assumption is, at some point, the United States and Iran will face off again, even though they have a nuclear deal in place.” Harmer said, citing Iran’s interests in Syria and support of Hezbollah.

During Harmer’s eight deployments there between 1995 and 2009, he said U.S. pilots and ship crews took care to stay in communication with their Iranian counterparts and not take unnecessary risk. He questioned why the Navy would have its patrol craft near Farsi Island.

“You don’t put two 50-foot patrol boats at the tip of the spear,” Harmer said.