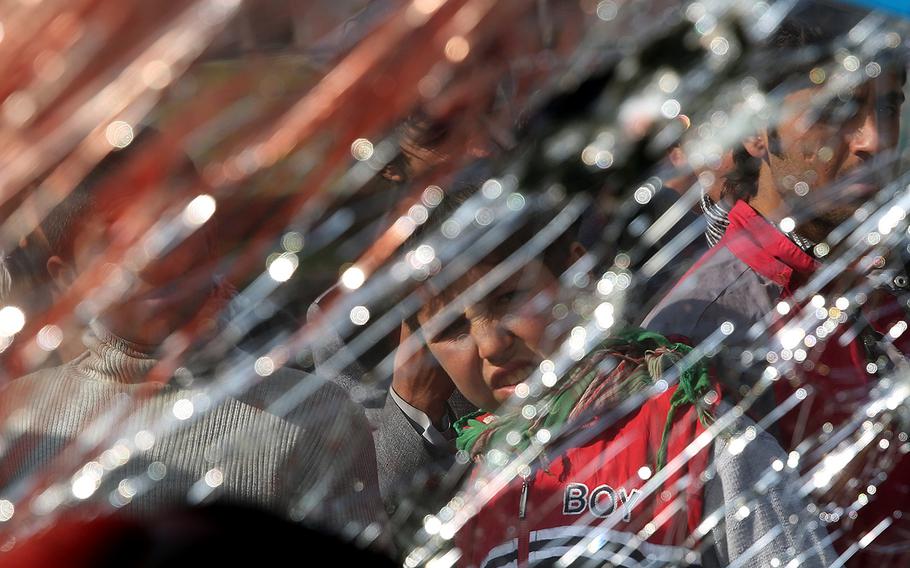 Afghans look at a broken windshield of a civilian vehicle damaged by a roadside bomb, in Kabul, Afghanistan, Tuesday, Oct. 14, 2014. The Afghan interior ministry said that several Afghan civilians have been killed in the bomb blast in the western part of the country's capital. (Massoud Hossaini/AP)

The deadliest attack, the car bombing, struck Afghan soldiers during an operation targeting the hideout of suspected suicide bombers in the eastern province of Khost late Tuesday night, according to a statement from the provincial governor's office.

Soldiers killed three suspected suicide bombers, including a woman, during the assault, the statement said. After the assault, a car bomb in the compound exploded, killing eight soldiers and wounding five, it said. The statement did not say why or how the bomb exploded.

Khost province is one of Afghanistan's eastern provinces bordering Pakistan where suicide bombers and other militants, including the Haqqani network, are active.

No one immediately claimed responsibility for the killings, but Taliban insurgents have stepped up their attacks against Afghan government officials across the country ahead of most foreign troops withdrawing at the end of the year.

Nad Ali is one of the districts in Helmand in which Taliban have a strong presence and use as a base to launch attacks elsewhere in the province.