In Kabul, fear of more attacks as US military exits Afghanistan 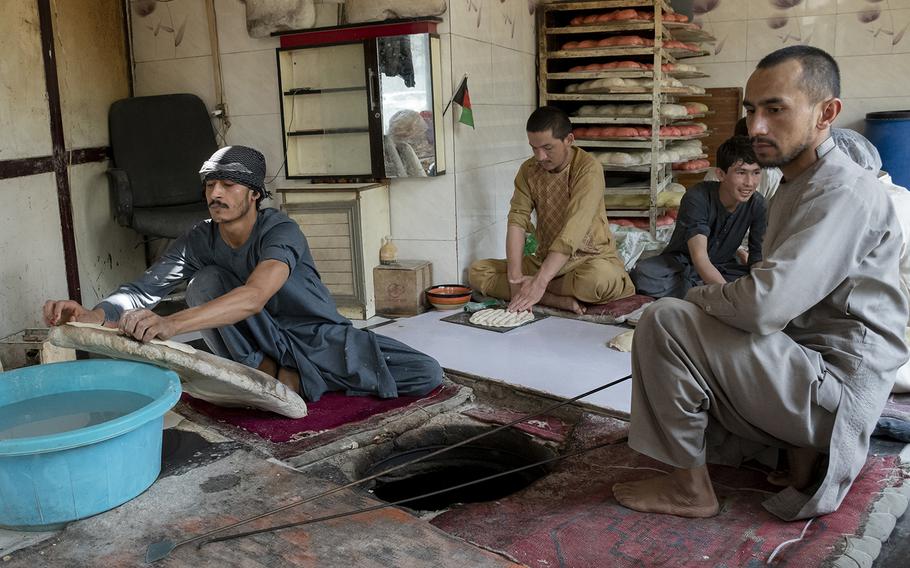 Zalmai Faqirzada, left, makes bread with his colleagues at a bakery close to Kabul's Green Zone on Sunday, May 2, 2021. Faqirzada said he feared violence would escalate in the city as foreign forces leave. (Phillip Walter Wellman/Stars and Stripes )

Zalmai Faqirzada, left, makes bread with his colleagues at a bakery close to Kabul's Green Zone on Sunday, May 2, 2021. Faqirzada said he feared violence would escalate in the city as foreign forces leave. (Phillip Walter Wellman/Stars and Stripes ) 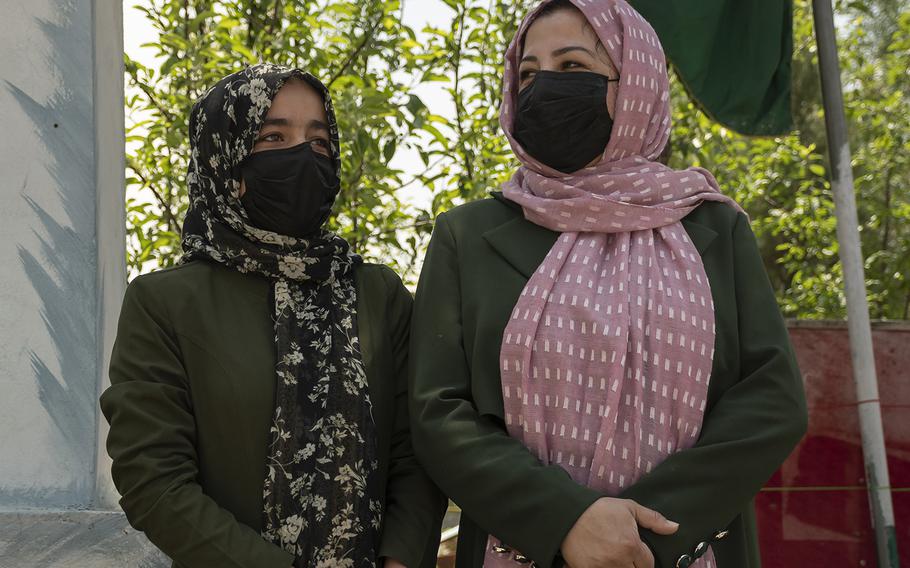 Sadiqa Halim, left, and Fatima Ravi watch students leaving a school in central Kabul on Sunday, May 2, 2021. Both women, who work at a school, said they were unhappy with the U.S. decision to withdraw from the country. (Phillip Walter Wellman/Stars and Stripes ) 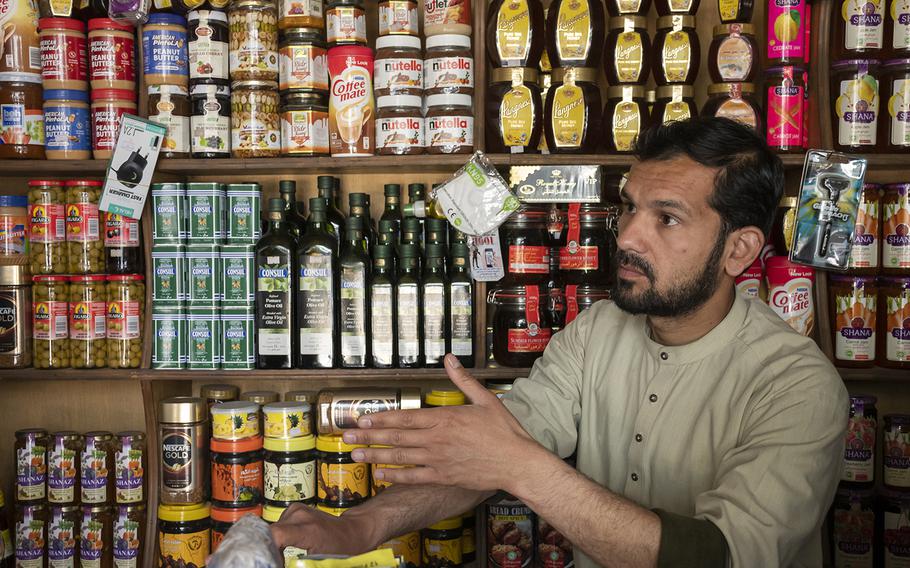 Grocer Talha Hairan on Sunday, May 2, 2021, explains how he and others in his Kabul neighborhood worry that violence will increase as foreign forces withdraw from Afghanistan. Hairan's shop is next to Kabul's Green Zone that houses NATO's Afghanistan headquarters. (Phillip Walter Wellman/Stars and Stripes ) 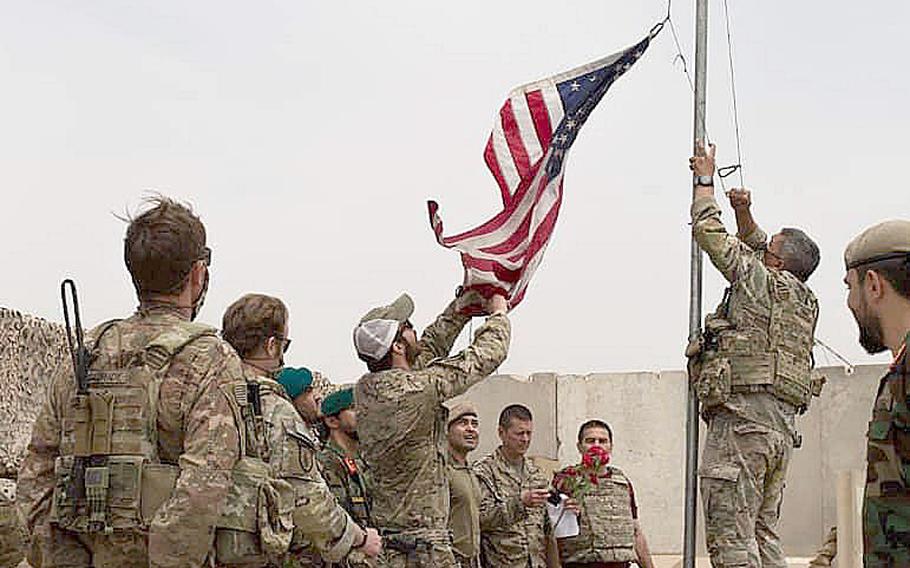 U.S. troops turned over Camp Antonik in Helmand, Afghanistan, province to Afghan special forces soldiers in a ceremony Sunday, May 2, 2021, a statement by the country's Ministry of Defense said. Camp Antonik, renamed from the former Camp Bastion, served as a base for U.S. Special Operations troops. (AFGHAN MINISTRY OF DEFENSE)

KABUL, Afghanistan — Residents of Afghanistan’s capital on Sunday expressed fears of more Taliban-fueled killing and violence in the coming months, a day after foreign forces officially began a full withdrawal from the country.

Taliban attacks that focused on Afghan forces and civilians increased throughout the past year but now many are worried that the militant group will resume attacks on foreign forces as they leave the country by Sept. 11 — and that those attacks will kill bystanders.

The Taliban have in recent months issued vague warnings of a reaction if the U.S. didn’t withdraw its forces by May 1, which the former Trump administration agreed to do last year in a pact that also called for the Taliban to come to peaceful terms with the government in Kabul. On Saturday, the group said in a statement it would “take every counteraction it deems appropriate against the occupying forces.”

Talha Hairan, 33, who owns a grocery store outside the fortified Green Zone that houses NATO’s Afghanistan headquarters and the U.S. Embassy, has been injured twice in nearby attacks, once by a suicide bomb and the other time by a rocket.

Hairan, a father of two whose family has owned the store for 28 years, said he expects more attacks. He takes security measures but has become largely used to the absence of security since 2001.

“The main thing is that you have to not think all the time about the incidents and the attacks," Hairan said. “It’s a routine now. Anything can happen anywhere.”

At a nearby bakery, Zalmai Faqirzada, 26, said “everyone was worried” about the situation. He shouted the words as he and his colleagues busily prepared bread that people would soon buy for their iftar dinners, which mark the end of the daily fast during the Muslim holy month of Ramadan.

Since the U.S.-Taliban deal was signed over a year ago, targeted attacks have increased in the capital, but the large explosions that were once common became rare.

Many fear that could change.

It’s not just Afghans who are concerned. The U.S. Embassy on Tuesday ordered all employees who are able to work remotely to leave the country. Some nonprofit and humanitarian groups have also sent staff abroad.

Nasir Ahmad, 34, the owner of a large grocery store in central Kabul frequented by foreigners, said he’s seen a marked drop in customers in the past week.

There has been a noticeable uptick in helicopter and cargo plane traffic over Kabul, which Abdul Khabir, 35, described as a sign that his country was being left behind.

Khabir, who said he worked for the U.S. military for 10 years and recently had his U.S. visa application rejected, exchanges money and sells phone cards on a busy street outside the Green Zone.

“Everyone is concerned about the withdrawal, and I know this is the most dangerous place to work, but what else can I do?” Khabir said. “This is the only place I can work.”

Khabir, like many people who spoke with Stars and Stripes, said he didn’t mind if the Taliban came to power after foreign forces leave, as long it brought an end to fighting and ushered in peace.

Sadiqa Halim, 26, who teaches at a girls school in Kabul’s affluent Qala-e-Fathullah area, disagreed. Halim worries that if the Taliban come to power, they will stop girls from going to school as they did in the past, though the group has said it won’t do so again.

But that’s a long-term worry, Halim pointed out, saying most people are predominantly concerned with the months ahead.

“Nothing has changed when it comes to peace” over the last two decades, said Halim’s colleague Fatima Ravi, 40, the headmaster at the school. “We haven’t felt the presence of the foreigners here in Afghanistan in that regard.”

The turnover came a day after an attack on Kandahar Airfield, which prompted a U.S. airstrike, military officials said. No group claimed responsibility for the attack, which did not cause any injuries or damages.