In Afghanistan, a bittersweet holiday 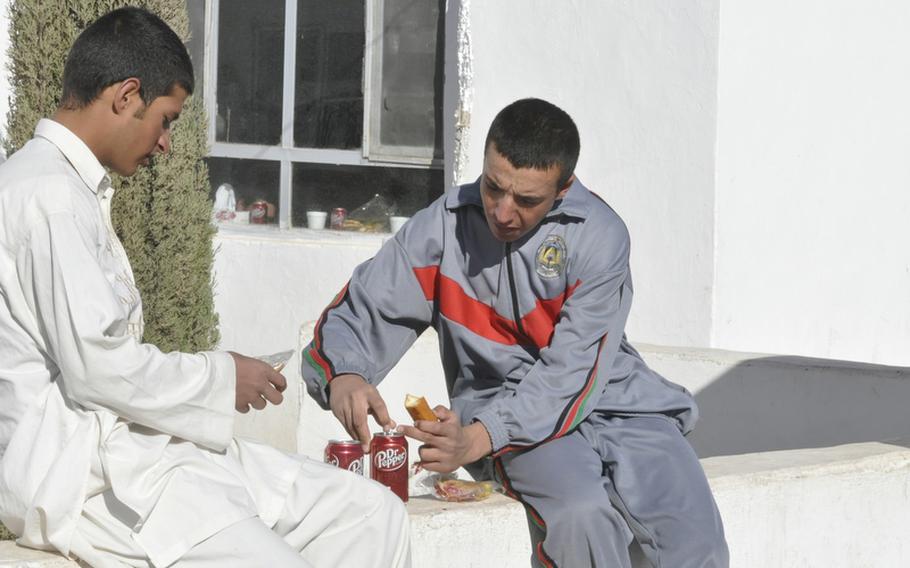 Buy Photo
Police recruits at the Adraskan National Training Center in western Afghanistan dig into some holiday treats Tuesday during the first day of the Eid al-Adha holiday. (Geoff Ziezulewicz/Stars and Stripes)

Buy Photo
Police recruits at the Adraskan National Training Center in western Afghanistan dig into some holiday treats Tuesday during the first day of the Eid al-Adha holiday. (Geoff Ziezulewicz/Stars and Stripes) 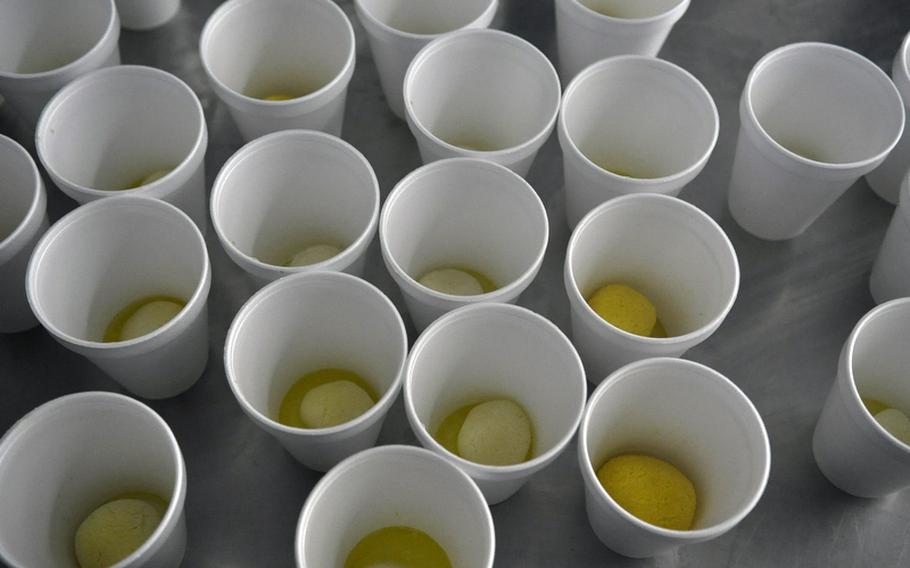 Buy Photo
Among the goodies prepared for Afghan police students at the Adraskan National Training Center on Tuesday were Lalu, a kind of dough ball. (Geoff Ziezulewicz/Stars and Stripes) 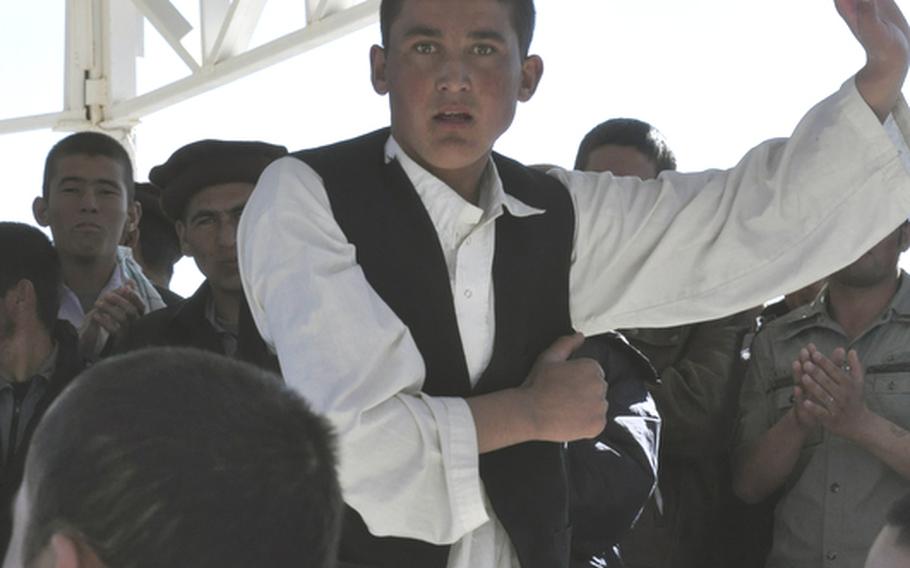 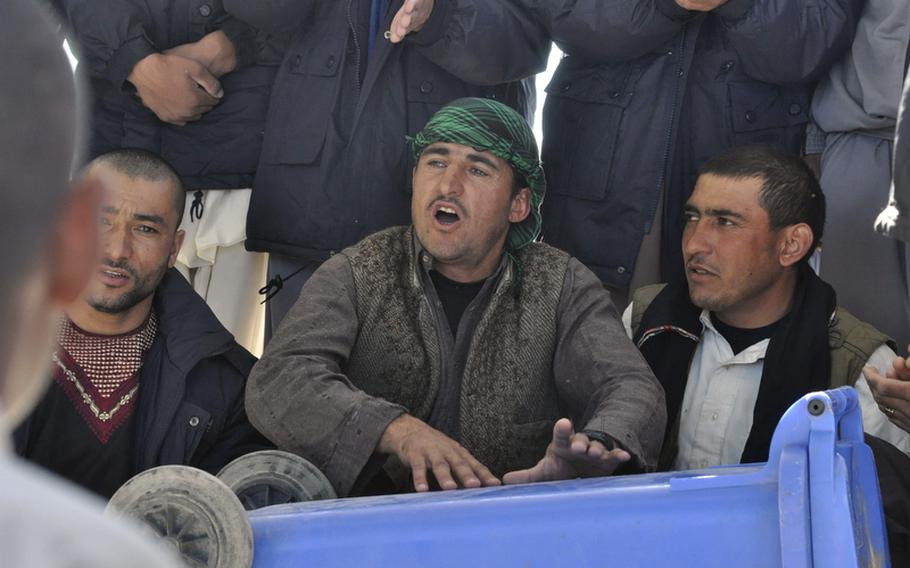 Buy Photo
A holiday is always a time for celebration. And during the first day of the Eid al-Adha holiday Tuesday, an Afghan police recruit drummed out a beat for his brethren to dance to on a trash dumpster at the Adraskan National Training Center in western Afghanistan. (Geoff Ziezulewicz/Stars and Stripes) 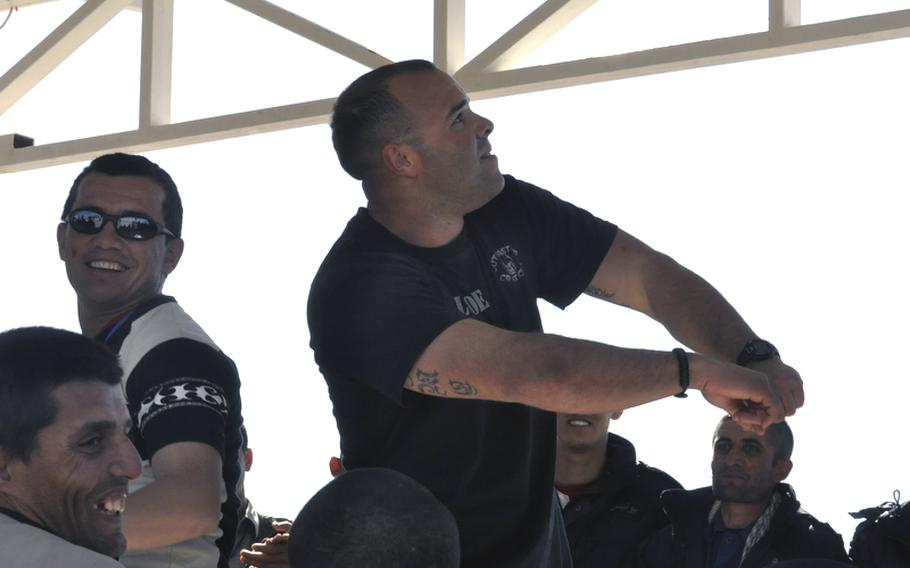 Buy Photo
The holiday festivities for Eid al-Adha on Tuesday at Adraskan National Training Center swept up Marine Sgt. Justin Lugo, a NATO trainer here, who busted his own Western-style moves during a dance circle. (Geoff Ziezulewicz/Stars and Stripes) 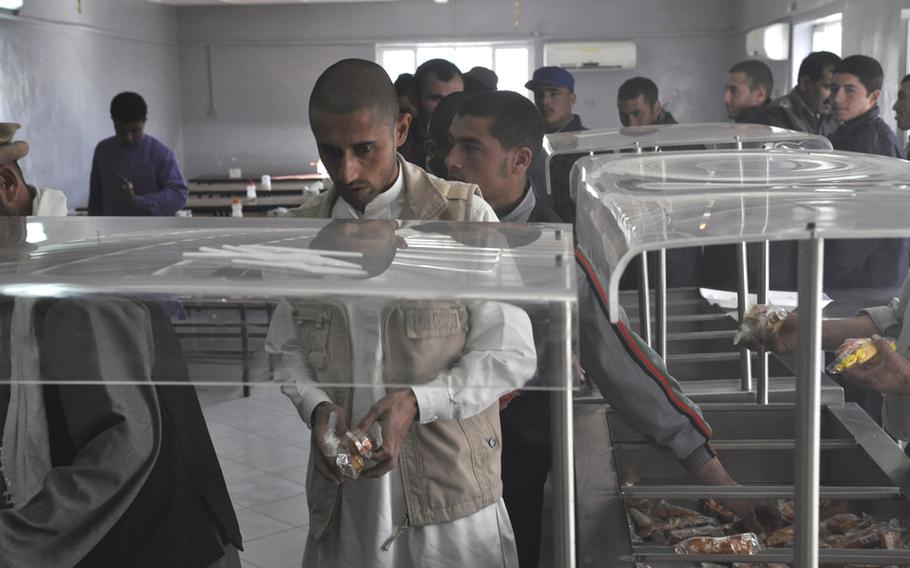 Buy Photo
Afghan police recruits go through the chow hall line Tuesday at Adraskan National Training Center. Tuesday marked the first day of Eid al-Adha, a three-day Muslim holiday. For many of the young recruits, it was their first time away from home during the holiday. (Geoff Ziezulewicz/Stars and Stripes) 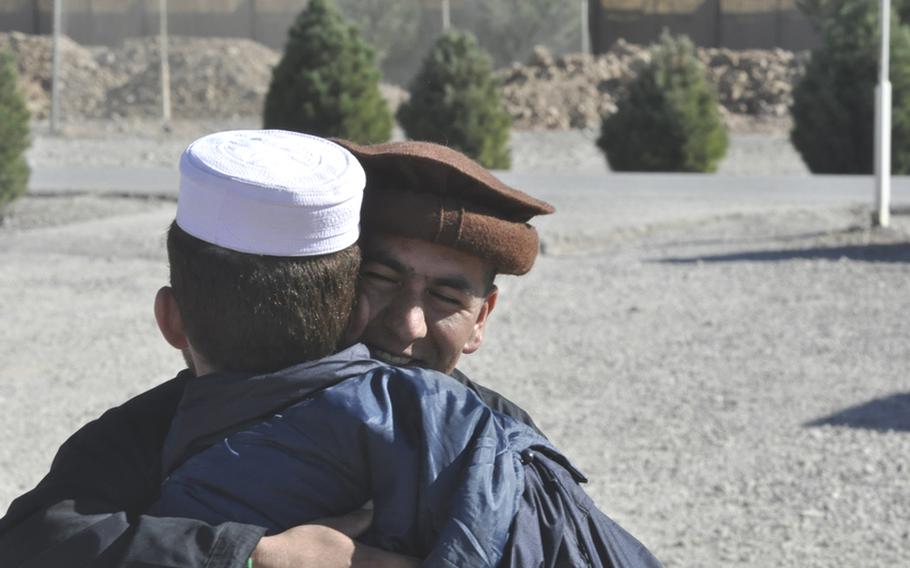 Buy Photo
Two police recruits hug their hellos Tuesday during the first day of the Eid al-Adha holiday at Adraskan National Training Center in Afghanistan. The Muslim holiday marks the end of the annual pilgrimage to Mecca and is a time for sacrifice and helping others. (Geoff Ziezulewicz/Stars and Stripes)

ADRASKAN NATIONAL TRAINING CENTER, Afghanistan &mdash; Ahmad Mohammad is one small piece of NATO&rsquo;s race to grow the Afghan army and police to 305,000 members by October 2011.

In a few short months, he will graduate from this training center and become part of the Afghan civil order police, a paramilitary unit dispatched to hotspots where conventional police are nonexistent or ineffective.

But this week, like Muslims around the world, 29-year-old Mohammad put everything on hold to celebrate Eid al-Adha. The three-day holiday commemorates the end of the annual pilgrimage to Mecca, Islam&rsquo;s holiest site, and is a time for sacrifice and helping others.

It was a bittersweet first day of festivities Tuesday for the recruits here at this police training center in Herat province. Many had never been away from home during such an important holiday.

Yes, there were candies, hugged greetings, a special meal and a morning prayer. Recruits will also get a break from training for the week. But Eid al-Adha, like Christmas or Hanukkah, is a holiday meant to be spent with family.

Aside from students who are from Herat province, it is too dangerous and expensive for trainees to go home for the holiday, according to Afghan police Col. Rasool Sedaqi, who oversees administrative duties at Adraskan.

&ldquo;In this kind of situation, we cannot let them go home,&rdquo; Sedaqi said, adding that the news inevitably upsets some recruits each year. &ldquo;For the young guys, it is difficult to be far from their families.&rdquo;

Older recruits may be used to being away for the holidays, Sedaqi said.

For Mohammad, 29, it was the second straight Eid al-Adha spent away from his home in the remote northern Jowzjan province.

&ldquo;It is quite difficult for us,&rdquo; he said. &ldquo;But we are with our brothers.&rdquo;

On Tuesday, training center officials slaughtered a sheep to show a similar devotion. As part of Eid al-Adha, or the Festival of Sacrifice, Muslims do this to show devotion to God before handing most of the meat over to the less fortunate.

If he was back home, Mohammad said his family would sacrifice a sheep on the first day, then spend the second and third days of Eid al-Adha visiting family and friends and helping the poor.

After the morning prayer and some assorted sweets Tuesday, some students set up an impromptu dance circle near the parade grounds. They took turns dancing as one recruit banged out a rhythm on an overturned plastic dumpster and the rest clapped in time.

To the delight of the Afghan students, Marine Cpl. Joshua Zarr and Sgt. Justin Lugo, both NATO trainers here, even got up and busted some Western-style moves to commemorate the day.

Sodogar, a recruit who like many Afghans uses only one name, said he was sad to be away from his family in eastern Paktika province, but it wasn&rsquo;t all bad.

&ldquo;It is not difficult,&rdquo; he noted. &ldquo;Because whenever we are among ourselves, we are not alone.&rdquo;