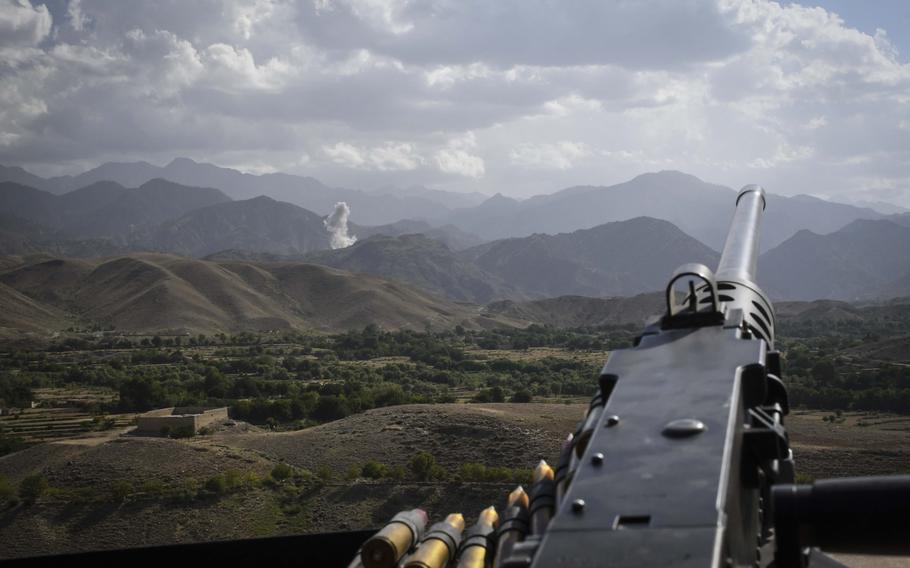 Buy Photo
A M-240B machine gunner's view of the aftermath of a bombing run by an U.S. F-16 fighter-bomber against positions held by Islamic State militants in Deh Bala district in Nangarhar province Saturday, July 7, 2018. (J.P. Lawrence / Stars and Stripes)

Buy Photo
A M-240B machine gunner's view of the aftermath of a bombing run by an U.S. F-16 fighter-bomber against positions held by Islamic State militants in Deh Bala district in Nangarhar province Saturday, July 7, 2018. (J.P. Lawrence / Stars and Stripes) 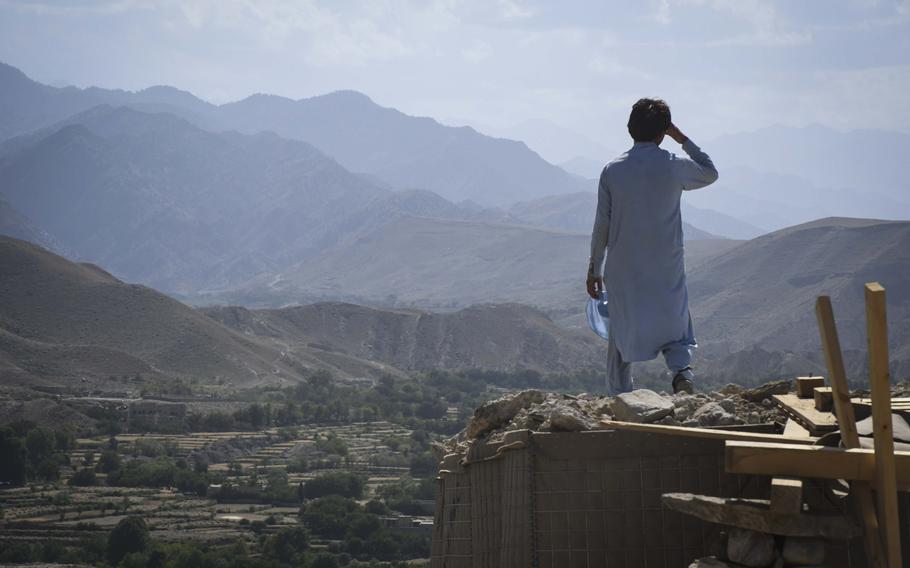 Buy Photo
Eman, 20, a member of the Afghan Local Police, watches over a key valley from his checkpoint in Deh Bala district in Nangarhar province, Afghanistan, on Saturday, July 7, 2018. (J.P. Lawrence / Stars and Stripes) 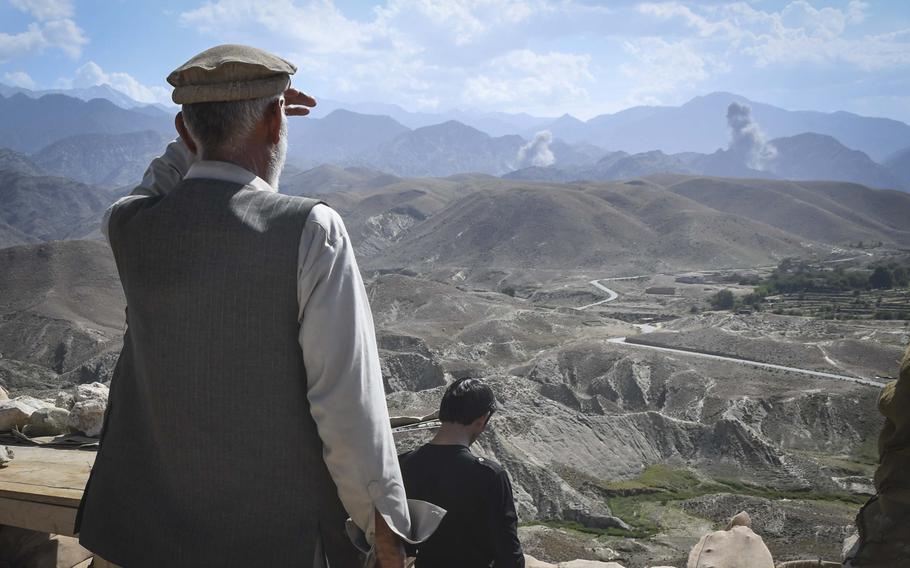 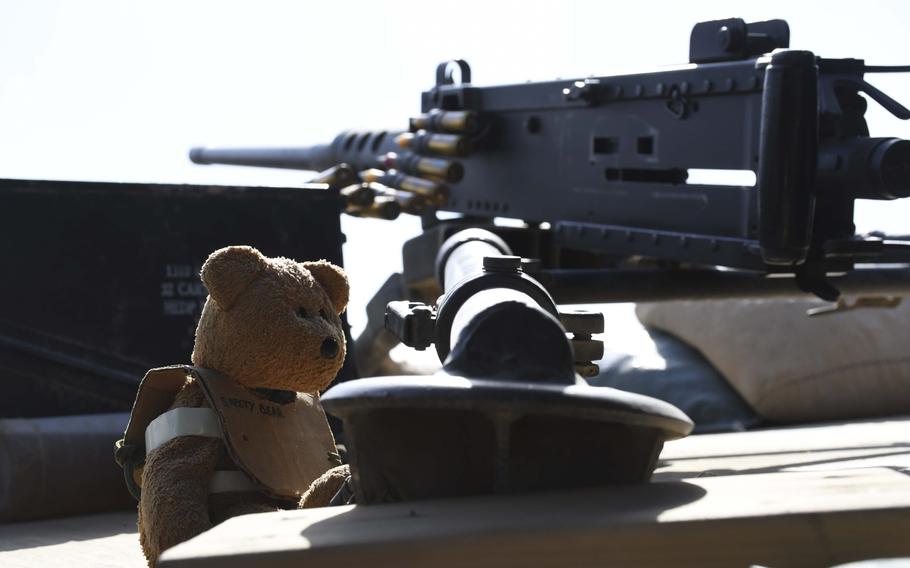 Buy Photo
A "safety bear" wears its protective cardboard vest as it guards an M-240B machine gun at the American special forces side of a checkpoint jointly held with Afghan commandos in Deh Bala district in The 3rd Battalion, 1st Special Forces Group assisted Afghan security forces in operations beginning in April and ending in June to capture Gurgoray, the purported capital of Islamic State fighters in the region, military officials said. (J.P. Lawrence / Stars and Stripes) 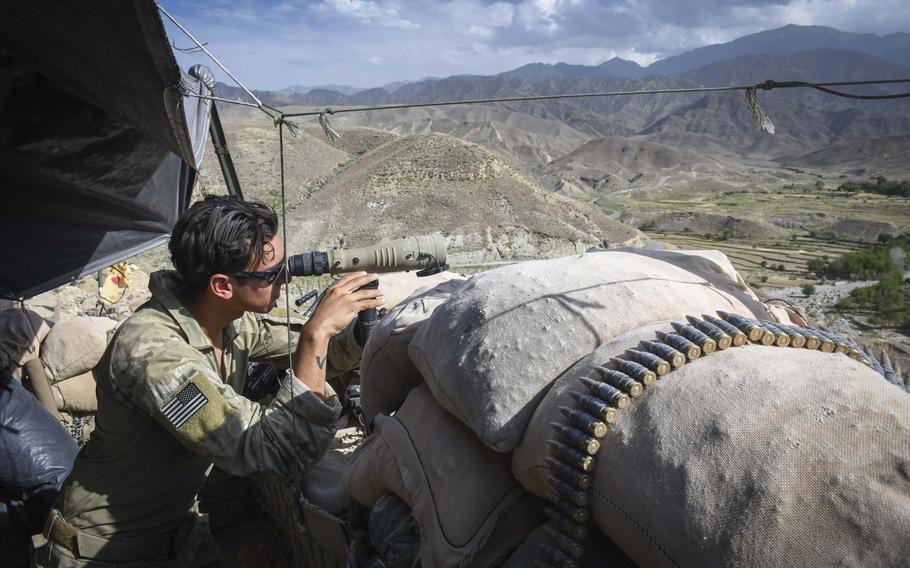 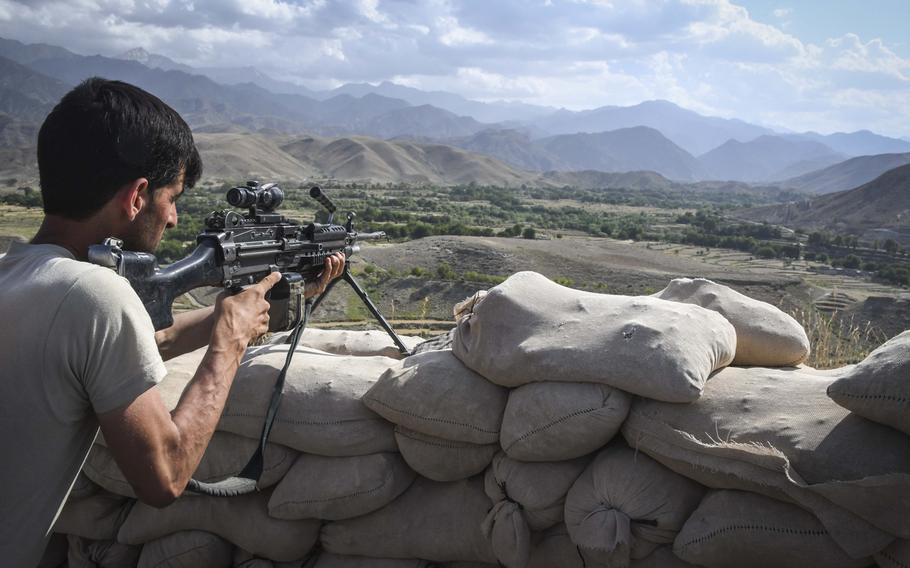 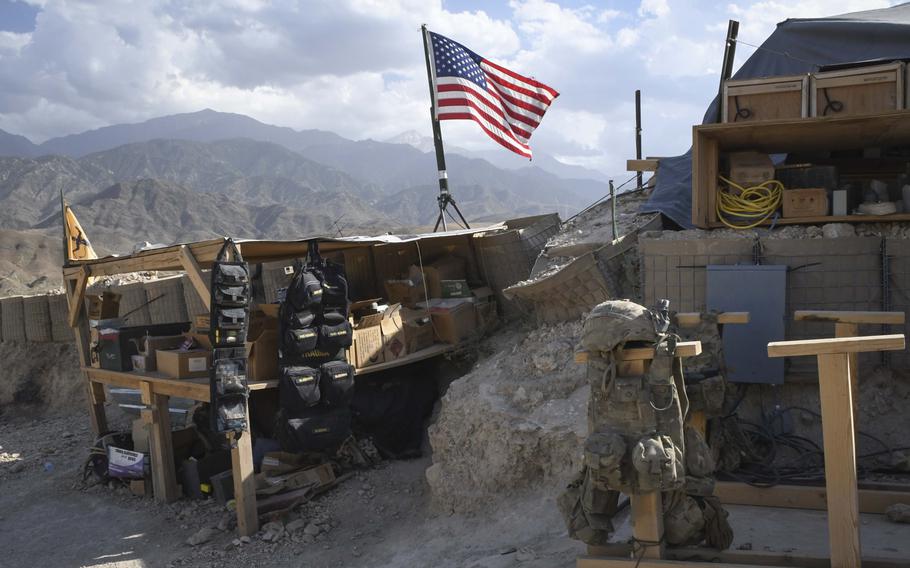 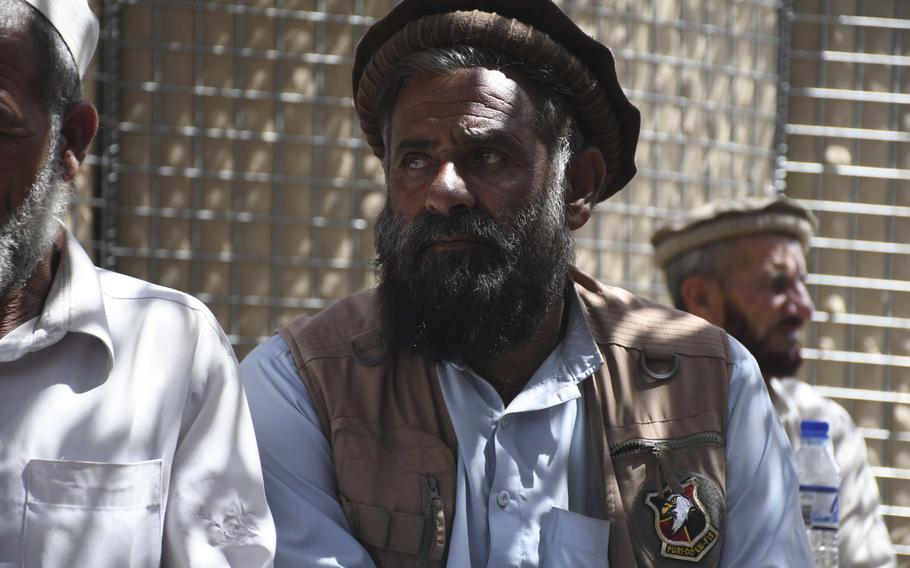 U.S. and Afghan special operations troops in one of their largest joint operations captured a stronghold that Islamic State fighters claimed as their local capital, military officials said Saturday.

No Americans or Afghan troops were killed in the offensive, which the U.S. military said killed 167 fighters from the Islamic State group – also known as ISIS or Daesh – and involved a complex multipronged attack on Gurgoray, a town purported to be the group’s capital in Deh Bala district in Nangarhar province.

“This area, two months ago, was controlled by Daesh,” Brig. Gen. John W. Brennan Jr., commander of NATO forces in eastern Afghanistan, said at a special operations outpost in Deh Bala. “We pushed them into the mountains, so they cannot harm the people here.”

The U.S. and Afghan offensive involved five Special Forces teams and three Afghan commando companies. In total, 600 members of the U.S. Army Special Forces, also known as Green Berets, participated in the mission, which began in April and continued into June, a U.S. military officer said.

Checkpoints manned by U.S. Special Forces, Afghan commandos and police now rise high above the valleys of Deh Bala, while American fighter-bombers continue to blast the Gurgoray Valley to stifle movements there by ISIS remnants.

Nangarhar province is one of the few places Americans continue to fight alongside Afghan forces in battle, and it has also been the deadliest spot for U.S. servicemembers, with a third of American combat deaths occurring there last year.

Sgt. 1st Class Mihail Golin, a Green Beret, died during a foot patrol in Nangarhar in January and was the first U.S. combat death of 2018 before the death of another servicemember in an insider attack Saturday.

The finger-like mountain ridges and wheat-filled valleys of Deh Bala district in Nangarhar have long provided shelter to insurgents – the Taliban, al-Qaida and now ISIS.

The district’s center lies 21 miles south of Jalalabad, the provincial capital where ISIS claimed recent deadly suicide attacks, and 11 miles west of Aachin, where the U.S. military in April 2017 dropped the largest bomb in its arsenal, “the mother of all bombs,” on an ISIS cave network.

Due to its location on the border with Pakistan, Deh Bala served as a key supply route for ISIS.

When ISIS first arrived in the area, reportedly around 2014, the militant group used its money reserves to convince locals to join them. U.S. and Afghan officials said the group then began taxing and extorting locals, killing those who did not comply and selling off the region’s trees and minerals.

The militant group beheaded a police officer following an attack two months ago, said Ghulam Sakhi, commander of the 200 Afghan Local Police in the district.

“In the beginning, ISIS seemed really nice,” Sakhi said through a translator. “All the people liked them. They were good with the people, but then by the time they were beheading people, people realized they were not good people.”

A team of Green Berets and Afghan commandos arrived in Deh Bala and dug into a position on a ridge overlooking the Gurgoray Valley on April 28, Thiel said.

This position, Observation Post Krakken, was east of Gurgoray and fired down into the valley as other U.S. and Afghan forces built up a larger base, Camp Blackbeard, near the Deh Bala district center.

“They put the capital under fire for about 30 days as they built up this space,” Thiel said while at Camp Blackbeard.

Machine gun and mortar fired rose up from Gurgoray and valley below OP Krakken, and U.S. airstrikes pounded the valley as ISIS fighters dug in. Afghan soldiers fasted during the day and ate only at night during the offensive, which overlapped with the Islamic holy month of Ramadan, Thiel said.

Then helicopters filled with Green Berets and Afghan commandos landed on ridgelines to the northwest of Gurgoray on May 30 and built outposts overlooking Gurgoray. This maneuver placed ISIS fighters under attack from both west and east, Thiel said.

ISIS fighters had built their defense to guard against an attack from the east, through the valley leading from OP Krakken to Gurgoray, Thiel said. Militants emerged from their positions and attacked the Green Berets and Afghan commandos to their west. Heavy airstrikes called in by Afghan commandos killed more than 100 ISIS fighters.

These Afghan commandos to the west of Gurgoray pushed on the capital. Meanwhile, two companies of commandos and Green Berets attacked from the east and cleared the valley, Thiel said.

The pincer movement trapped ISIS fighters and led to the capture of the city by June 9, Thiel said.

ISIS has lost about half of its territory in recent months, Thiel said. The military said ISIS has been driven out from Kot and Achin provinces as well and that their new stronghold has moved to Tora Bora.

Green Berets and Afghan commandos continue to man OP Krakken, and Thiel said a U.S. medical team remains in the area to treat injuries from mines, many of which were left by ISIS in the valley. Afghan security forces are patrolling the area and installing checkpoints.

Many families – estimated as many as 400 families – in the area fled due to ISIS, said Rezwanullah Basharmal, governor of Deh Bala district. A few families have now returned to plant wheat.

“Once all the checkpoints are back, they’ll come back,” Basharmal said.

Residents of the area fear that once the elite troops withdraw from the region, the regular security forces there will allow the area to fall back into enemy hands.

"We know that our security forces have always showed bravery to capture areas from Daesh or Taliban, but after a while these areas go back in their hands again," Israrullah Murad, a member of Nangarhar's provincial council, said.

The district’s Afghan Local Police commander, Sakhi, said the operations against ISIS in the region now means locals – including the Taliban – can return.

“All the people feel very happy about the elimination of ISIS,“ Sakhi said through an interpreter. “As soon as ISIS is finished, the Taliban will come back. They were scared of ISIS.”

Zubair Babakarhail contributed to this story.