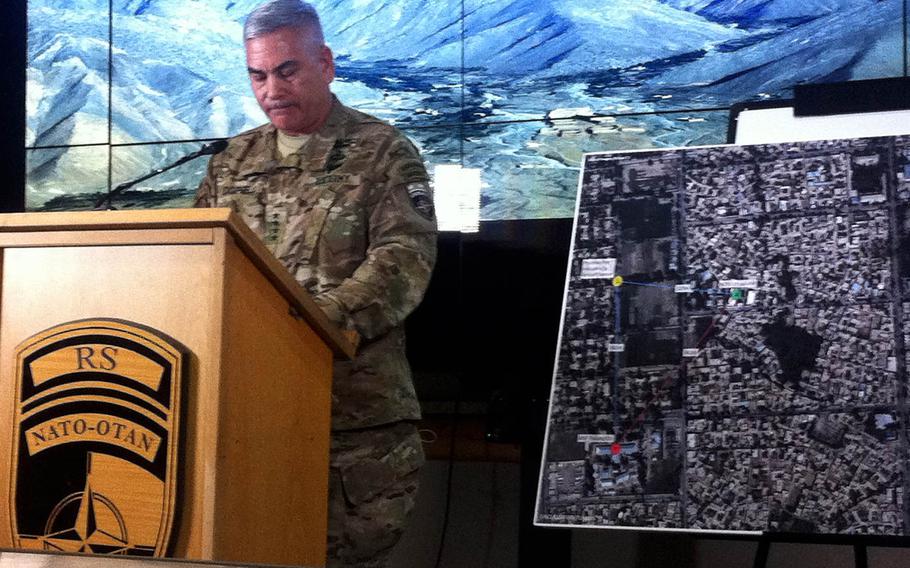 Gen. John Campbell, commander of U.S. Forces-Afghanistan, told reporters in Kabul on Wednesday, Nov. 25, 2015, that an Oct. 3 airstrike on a Doctors Without Borders hospital in the northern Afghan city of Kunduz was the result of ''avoidable human error.'' (Josh Smith/Stars and Stripes)

KABUL, Afghanistan — A U.S. airstrike that killed 30 people at a Doctors Without Borders hospital in Kunduz was caused largely by human error, and those most closely involved have been suspended, the head of U.S. forces in Afghanistan said Wednesday.

The Oct. 3 strike on the hospital was a “direct result of avoidable human error, compounded by process and equipment failures,” Gen. John Campbell told reporters as he went over the findings of an investigation into the incident. “In addition, the report found that fatigue and a high operational tempo contributed to this tragedy,” as U.S. and Afghan special operations forces were under sustained attack for five days and nights.

“Multiple errors resulted in mistakes,” Campbell said during a news conference, calling the strike “a tragic but avoidable accident.”

Some of the American troops involved failed to follow the rules of engagement and the airstrike was “not appropriate for the threat faced,” Brig. Gen. Wilson Shoffner, Campbell’s deputy chief of staff for communications, acknowledged at the same briefing. The U.S. special forces commander on the ground did not have authority to call in the strike based on the circumstances, the report found.

Those “most closely associated with the incident have been suspended from their duties,” Campbell said. “Matters regarding individual accountability will be managed in accordance with standard military justice and administrative practices for joint commands.” Officials refused to disclose how many personnel have been suspended, or what disciplinary recommendations have been made.

While American officials struck an apologetic tone, insisting they would never intentionally target a hospital, the report’s findings, which contradict some other accounts, may do little to sway critics who say it is hard to understand how well-trained troops with high-tech gear could mistakenly destroy a well-known medical facility.

Officials with Doctors Without Borders, which goes by its French initials MSF, called the report’s findings “shocking” and said many questions remain unanswered.

“The frightening catalogue of errors outlined today illustrates gross negligence on the part of U.S. forces and violations of the rules of war,” MSF General Director Christopher Stokes said in a statement. “The destruction of a protected facility without verifying the target — in this case a functioning hospital full of medical staff and patients — cannot only be dismissed as individual human error or breaches of the US rules of engagement.”

U.S. investigators determined that a series of errors led the American forces involved to confuse the hospital run by MSF with an Afghan intelligence headquarters building reportedly occupied by Taliban fighters.

“The medical facility was misidentified as a target by U.S. personnel who believed they were striking a different building several hundred meters away where there were reports of combatants,” Campbell said. “The report also determined that the personnel who requested the strike, and those who executed it from the air, did not undertake appropriate measures to verify that the facility was a legitimate military target.”

The mistakes began when an AC-130 gunship was scrambled to respond to a report of troops under fire. In the rush, the report found, the crew skipped some basic steps, including a normal mission brief and a review of the “no-strike” list of targets to be avoided, such as the MSF hospital.

When that mission was called off, the plane continued with its original task of supporting an operation being conducted by U.S. and Afghan special forces in the heart of the city.

During its flight, some of the aircraft’s electronic communications systems malfunctioned, preventing the ship from transmitting video and other electronic messages. The crew nevertheless continued the mission despite the technical failures.

As the AC-130 approached the city, it reported being fired upon by a surface-to-air missile, which led to it taking up position eight miles away, undermining the capabilities of some of its targeting systems. Still, the military forces proceeded with a plan to attack suspected insurgents occupying the intelligence agency headquarters.

The American special operations commander on the ground did not have the authority to call in the airstrike, and could not visually distinguish between the hospital and the intended target, according to the report.

When the ground troops sent the aircraft the correct coordinates of the headquarters building, the malfunctioning targeting systems instead correlated the coordinates to an open field. The air crew then visually selected the hospital as the “closest large building near the open field,” based on a description provided by a forward air controller on the ground.

“Tragically, this misidentification continued throughout the remainder of the operation, even though there were some contradictory indicators,” Campbell said. When the system eventually correctly identified the intended target, “the crew remained fixated on the physical description of the facility and at that point did not rely on the grid coordinate,” despite no evidence of hostile activity at the hospital.

Even as the attack began, opportunities to avert disaster were missed.

One minute before opening fire, the air crew provided the coordinates of the hospital to a military headquarters at Bagram Air Field. But troops at the headquarters failed to match the coordinates to the no-strike list, and were also under the impression that the aircraft was providing immediate support to troops under fire.

The strike began at 2:08 a.m. Twelve minutes later, a special forces officer at Bagram received a desperate call from MSF officials saying their hospital was under attack, yet the strikes continued for nearly 20 minutes longer. By the time the special forces commander in Kunduz was informed that the hospital had been struck, the AC-130 had already stopped firing, leaving the main hospital building an inferno of flames.

The U.S. timeline differs from that from MSF, which has reported that the strikes lasted for more than an hour as the organization called and texted multiple officials in Afghanistan and Washington.

The attack followed days of heavy fighting in the northern Afghanistan city, which had been overrun by Taliban insurgents. Afghan forces initially fell back in the wake of the surprise Taliban offensive five days earlier, but then, aided by American special operations troops, fought to retake control of the city.

Senior Afghan officials have claimed that the hospital compound was being used by Taliban fighters to fire on government forces trying to retake the area. Shoffner refused to comment on the Afghan allegations.

But MSF asserts that the hospital was not being used as a base by insurgents and that there was no heavy fighting in the area at the time.

The strike sparked controversy over the continued use of American airstrikes, despite the declared end of the international combat mission at the end of last year.

Kate Clark, a researcher with the Afghan Analysts Network, said Wednesday’s briefing only raised more questions about the American rules of engagement in Afghanistan, which Schoffner said some of those involved did not follow.

“All those rules of engagement take into account the Geneva Conventions, and they are there partly to ensure that U.S. forces don’t breach those conventions and commit war crimes,” she said. “So if you’re not following your rules of engagement you may well be in serious trouble, because it’s not just a war crime to target a hospital, it’s also a war crime not to take precautions to protect civilians.”

In the days following the attack, President Barack Obama apologized and Defense Secretary Ash Carter said he would hold personnel accountable if an investigation showed U.S. culpability in the airstrike at the hospital.

The results did not satisfy MSF officials, who reiterated calls for an independent investigation into the attack, which they say is a war crime. “The US version of events presented today leaves MSF with more questions than answers,” Stokes said. “Investigations of this incident cannot be left solely to parties to the conflict in Afghanistan.”

More than a half-million people have signed an MSF petition urging Obama to consent to an independent investigation. Critics have said the military investigation, which was overseen by general officers outside the chain of command but vetted by Campbell, is not enough to determine the facts.

The U.S. Forces-Afghanistan investigation, which Campbell defended as “thorough and unbiased,” is one of three undertaken after the attack, but no assessment has been made by anybody outside of the parties involved.

MSF released the results of its own review on Nov. 5, concluding that the attack was conducted intentionally to destroy the hospital, a contention that Campbell denied, saying U.S. forces would never intentionally strike a hospital.

The NATO-led coalition along with some Afghan officials has been conducting a limited probe to officially confirm civilian casualties. The Afghan government has not launched any kind of separate investigation, despite initial promises to examine the tragedy.

In the end, Campbell admitted, U.S. troops “failed to meet our own high standards on Oct. 3rd.”